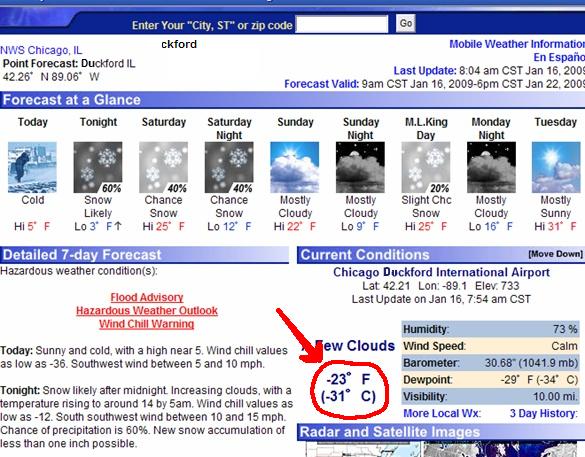 I've been colder; I did live in MN for two years whilst I attended grad school, and we had one night when it got down to -50 (and the police were on the radio stations saying "do not go outside, you will die.").  But that's just quibbling: once it gets this cold, a few fewer degrees just doesn't make a difference; oh, your frozen corpsesickle might take a little bit longer to thaw out at -50, but that's about it.

Duck U. is closed today, due to the cold.  I'd be happier if I didn't already have the day off (I'm working on Saturday), but jeez, it's chilly out there.  Later this afternoon when the temps are above zero, I'm going to have to see if the Duckmobile will start.  It did pretty well yesterday morning, and it was -15 then.

1 There is cold, and there is too cold.  That is definitely too cold.

One of my roomies back in MN told me a story about a trip he took to Duluth, way up north in the state.  His car had an electric oil heater on it, and one night he plugged it into one of those orange extension cords... y'know, the type you probably have in your garage somewhere?

Overnight, it got so cold that the extension cord froze.  When he went to unplug his car, it broke apart in his hand.  Rubber coating, copper wires, just shattered.

I don't know if I really believe it, but after some of the nights up there, it probably isn't impossible.

I heard on the news that Chicago had closed ice skating rinks because it was too cold.  Waaaaaay too cold.

what happened to Global Warming?

They renamed it "Global Climate Change" so that unseasonably cold weather would no longer be a disconfirming case.

I heard on the news that Chicago had closed ice skating rinks because it was too cold.

Don't know if this is the reason, but you can't skate on ice if it's too cold.  The ice melts under the pressure of your skates, which is what lets you, uh, skate, but if it's too cold it doesn't melt and you just fall over.

7 Of course, if you're me, you just fall over regardless.