Clannad's End, or "Can I Get A Light Cue?" It took me nearly two weeks to swallow down the trepidation and watch the last two episodes of Clannad.  I knew that ep22 would finally show us Nagisa's play, and that filled me with dread... because, underneath everything that I've become over the years, there's still a part of me that wishes I could have followed my dream and become a lighting designer for the theatre.

Like the "Old Man", I had to let that dream go, though not for the same reasons.

In fact, recently Clannad had been punching some very touchy buttons in me, for reasons that will become clear later this week.  It took some serious effort for me to finally open up ZoomPlayer and run the final eps.

So imagine my surprise when I found myself doing something I hadn't done in a long time...

Back in high school, I wasn't one of the cool kids.  I wasn't even a nerd.  I was an outcast.  I had some friends, yes (Pond reader Vaucanson's Duck foremost amongst them), but I was essentially miserable.

One day, as I was headed to 6th Period Orchestra class, surrounded by an even darker cloud than was normal, a teacher grabbed me and said "hold this plywood sheet steady."  Startled, I did, and he proceeded to cut it in half with a circular saw.  "Take that piece on stage, then come back here."  This, too, I did, and for the next couple of hours, I was too busy notice I missed class.  When the final bell rang to end the school day, the teacher said "good work, see you tomorrow."

The next day, I headed to Orchestra class, and the teacher (let's call him Mr. H) grabbed me again and handed me a wrench.  "I need you to hang those lights."  And so I did.  Suddenly, I found that I was enjoying myself, for the first time in my high school life.  In fact, while I never took a theatre class in high school, I spent more and more time in the theatre.  Mr H gave me, perhaps, an unprecedented amount of responsibility for a non-theatre student over the next two years, and while I began my college career as a journalism major (intending to become a radio guy), I quickly moved to a theatre major.

I realized that, while I enjoyed building sets, I loved working with the lights.  With my first lighting design, despite very little training, I even seemed to be a natural.  I was raw, sure, and nothing short of experience would fix that, but it didn't take long before it was clear that I had a knack for this sort of thing.  I transferred from the JuCo I was attending to Duck U., and during my Junior and Senior years, was the lighting designer for 75 mainstage productions, student-run shows, modern dance concerts (to this day, my favorite thing to design for), and even a few campus dances.  Some weeks, I barely saw my dorm room for all the time I spent at the Performing Arts building (I had a set of keys to the theatre wing, and the green room had a nice couch...).  Eventually, I earned my BFA in theatrical design (lighting design emphasis), and was accepted to graduate school.

Where I lasted five trimesters (out of six) before I was kicked out.  I couldn't play the political game, and was so burned out on 20-hour days that I did a poor job on a Practical (I did all the design and tech work for a student show)... and was told that I'd never get a thesis project.

Other than a couple of "guest designer" stints for Mr H, I haven't done any theatre since.  But there's still that part of me that knows that I was pretty darn good at what I did... and will see a play and nitpick the lighting design.

Which is why I was so pleased with ep22 of Clannad.  While I expected to see Nagisa's play, I didn't expect KyoAni to actually animate the first few minutes of it like an actual stage production. 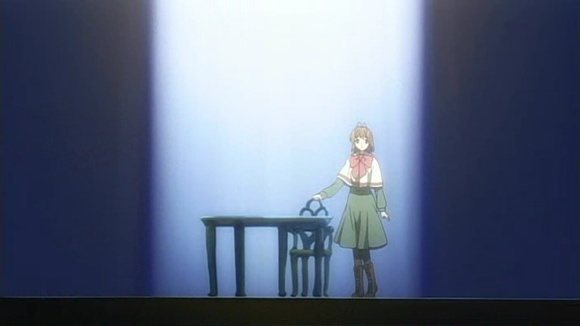 Light Cue (hereafter "LQ") 1.  A dark stage with a highlighted table, chair, and actress.  A simple look, but not one that's particularly easy to do well.  Any idiot can place a couple of down-lights above the table and turn them on, but that causes huge shadows that aren't visible here.  There's light coming from the front (probably at a 45o angle off centerline left and right), AND the back (directly from behind).  I particularly like the shade of blue used as the accent color (If I was doing this design, to keep Nagisa from looking completely washed out and unnatural, one of the front pair of lights would use Rosco 54 "special lavender", the other one Rosco 60 "no color blue"; the accents and backlight either Rosco 64 "light steel blue" or 69 "brilliant blue").  To see what the Rosco numbers are referring to, click HERE. 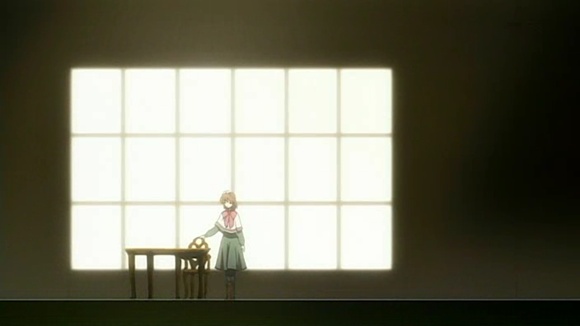 LQ2.  The room reveal.  The window effect is a nice one, done with (probably) two lighting instruments with "9-pane window" gobos.  Note the color change.  I'd probably change the Rosco 54 to Rosco 01 "light bastard amber" to suggest sunlight, while the window lights have either Rosco 12 "straw" or Rosco 310 "daffodil", depending on exactly how it looked on the cyc.  Gobos can be a powerful tool in a designer's bag of tricks, and this one works very well.  Most of the accent/downlights are off. 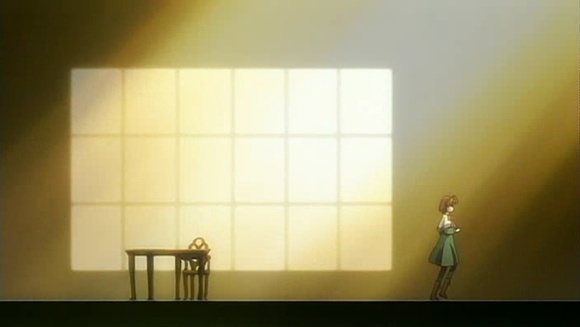 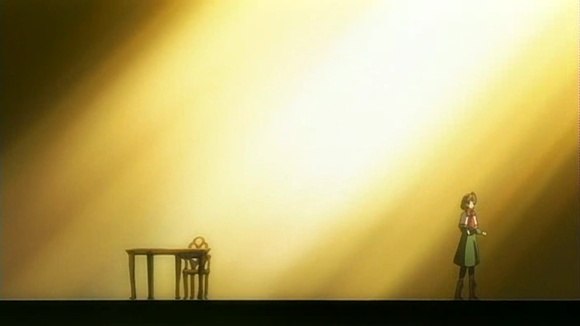 LQ3b: outside.  These are actually two parts of the same light cue, maybe a second of time elapsed.  The cyc is being washed by 'sunlight', with a hot white spot in the center.  I'm not entirely sure how I'd do this, to be honest... depends on if there's any room behind the cyc or not.  Rosco 20 "medium amber" on the cyc lights, but a different color on the acting area, maybe Rosco 40 "light salmon" (I'd have to play with it) for the sunlight effect coming from side-lights.

I'll say this, though: I would have tried REAL hard to make the table and chair disappear.  There's enough room on that stage where it could be dark on one side and lighted on the other;  that would have enhanced the "I'm outside now" look.  This is the final look for the play, or at least the final cue we see.

If the series ended after ep22, I would have been very happy.  For some reason, though, they threw in ep23, which is almost a comedy episode, and would have been a great OVA.  Instead, the series ends on a slightly dumb note: Nagisa tries to get Tomoya to "take her on a date".  *sigh*  I'd've rather seen another episode in the Ryou/Kyou/Tomoyo arcs than this, but it did give us this shot: 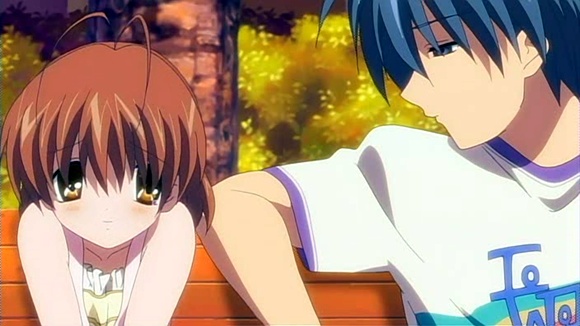 I'm going to try and forget I saw ep23, and eagerly anticipate the upcoming Clannad: After Story series.