Beginning The Miracle As all good Pacific War otaku know, the 69th anniversary of the Battle of Midway is coming up early next month.  Regarded as the most stunning and important victory in the history of Naval warfare, three US aircraft carriers, supported by aircraft flying from Midway Atoll, attacked and sunk four Japanese aircraft carriers, three of them in the space of just a handful of minutes on June 4th, 1942.

While the US was outnumbered by the Japanese in the number of aircraft carriers present at the battle, the Americans had broken the Japanese radio codes and had a detailed knowledge of their plans for the whole skirmish.  Taking advantage of this, the US Navy in effect ambushed the Japanese fleet.  Of course, the victory did not come without cost.  Three squadrons of torpedo planes were effectively wiped out, and one of the American carriers, the USS Yorktown, was sunk.

The Japanese presumed the Yorktown to have been sunk a month earlier, at the Battle of the Coral Sea.  Indeed, she had been beaten up, but the first and possibly greatest of the "miracles" of Midway had occurred in the intervening time.

The crippled Yorktown sailed into Pearl Harbor on May 27th, 1942, needing what was predicted to be three months' worth of repairs back at one of the great naval bases on the American coast before being combat-ready again.  Admiral Chester Nimitz told the Pearl Harbor repair teams that they had 72 hours.  Once in drydock, over 1200 workers swarmed over the carrier. 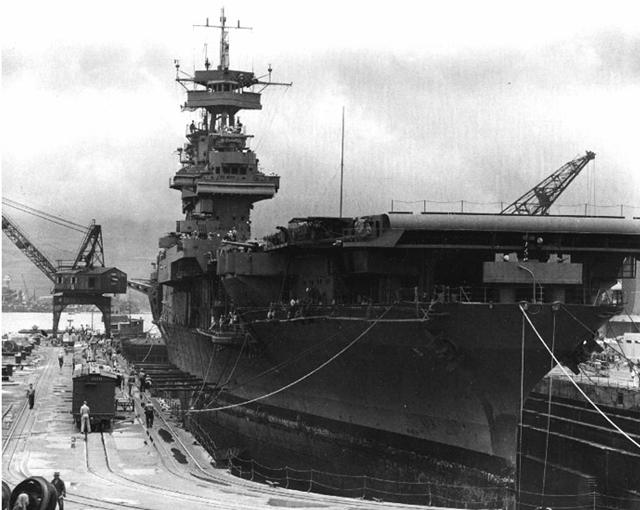 For three days straight, shipfitters, electricians, welders, specialists of all sorts and types, both civilian and uniformed, worked non-stop on the badly wounded Yorktown, repairing the damage done to her by the Japanese.  At the end of that time, on May 30th, she was refloated and immediately put back out to sea.  Repair crews continued to work as she sortied until being taken off by the USS Vestal.  The Yorktown sailed off to Midway, a ship that shouldn't have been able to fight.  A miracle indeed, a miracle of American mechanical know-how and industrial might.

At least, that's the way the story goes.  For many years, I'd wondered about just how badly the Yorktown was hurt.  She had taken a single hit amidships from a 250kg bomb and some other damage from near misses.  The official damage report makes for eye-opening reading. 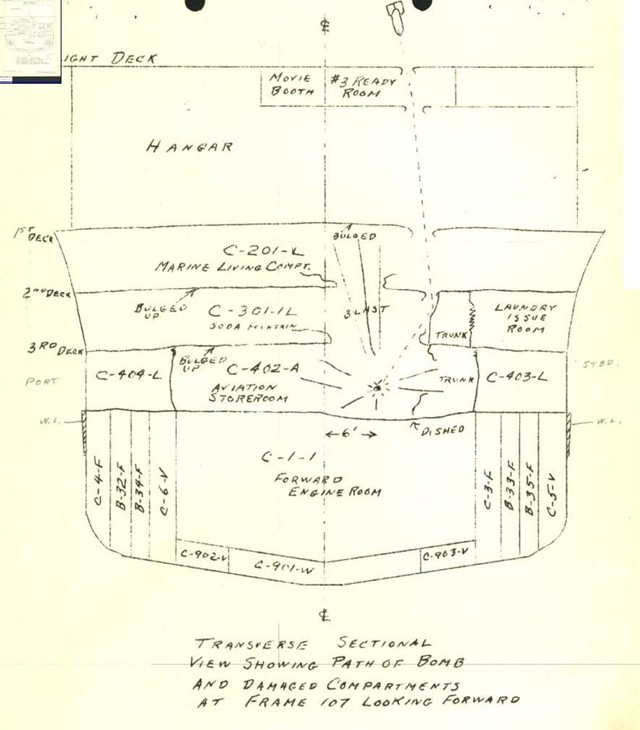 The bomb hit left a 12" hole in the flight deck, then punched through the gallery and hangar decks, leaving slightly larger holes as it did, indicating that the bomb began to tumble after going through the flight deck.  It then went through the 2nd deck, ricocheted off a vertical support beam, ripped through the 3rd deck level, then exploded in the air some feet above the 4th deck, in an aviation storeroom.  This large space was dogged down and watertight.  The explosion blew upwards, destroying the soda fountain and starting fires in the storeroom and the "laundry issue room."  Many watertight doors in the area of the bomb hit were blown out, suffered shrapnel damage, or deformed.  The 4th and 3rd decks near the explosion were deformed by the blast.  Casualties numbered around 100.

More shrapnel punctured air intakes to three boiler rooms.  Thick black smoke from the fires was thereby sucked into the intakes, forcing the abandonment of those boiler rooms, which slowed the Yorktown to 25kts until the fires were extinguished.  This occurred very quickly and the ship was soon able to make full speed again.

Even the official damage report states that the damage from this bomb "did not incapacitate the Yorktown to any great extent."  It took little time to patch the flight deck, her elevators were undamaged, and only the breaking off of battle prevented the Yorktown from continuing flight operations. 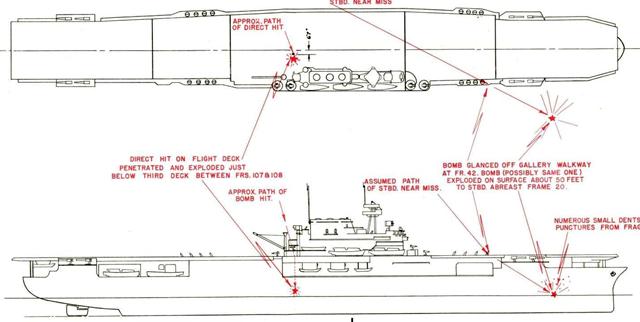 That bomb was not the only damage suffered in the attack on the Yorktown, however.  A second bomb missed just alongside forward to starboard.  From this near miss which exploded on the the surface of the water, the carrier suffered some shrapnel damage and a damaged walkway.

A second near miss occurred on her port side.  This bomb exploded close aboard and underwater.  Shock from the blast dished in hull plates and caused leaks in some of her oil tanks.  The official report, in a fine example of understatement, says that "(t)he oil slick from leaky port oil tanks was extremely undesirable."  In effect, the Yorktown was leaving a trail behind her, one that could lead any Japanese aircraft right to her.

Once she pulled into Pearl Harbor, it appears that the majority of the time was spent replacing damaged structural frames caused by the hit amidships.  As one would expect, the repairs were done hastily, and much was intentionally left undone: it didn't have to look pretty, it just had to work.  For example, a large hole was left in the 2nd deck; for all intents and purposes, the floor in that location was there to keep people from falling into the 3rd deck, so nothing was done.  I assume someone eventually covered it with plywood.  The dished-in hull plates on the port side weren't repaired at all; the leaky seam that caused the oil slick was welded and caulked, and the oil tanks were patched.  Nothing was done to the hull itself.  Presumably, that sort of repairs were to be done after Midway.

After reading the damage report, I've come to the inescapable conclusion that none of the damage done to the Yorktown, other than the oil leak, was really important enough to warrant calling her "crippled," or even particularly badly damaged.  To be sure, the structural damage belowdecks wasn't something you'd want to have when you're going into battle, but it wasn't enough to affect her combat ability.  Since she needed to have the oil leak attended to, and that meant she had to be drydocked, why not send in the hordes of repairmen too?

In short, the "miracle" of the crippled Yorktown being brought back from the dead so she could participate in the Miracle of Midway... wasn't much of a miracle at all.

Except in one rather important way: morale.  Having those repair crews making the Yorktown healthy, or at least less sick, again had to have done wonders for the spirits of the ship's crew, not to mention that of the workers.  Arguably, the Yorktown was the most important ship at Midway, probably getting credit for two carriers, then being a sponge for Japanese counterattacks and keeping the Enterprise and Hornet from damage.  How much of her performance could come down to "fighting spirit?"  And would that fighting spirit have been lessened by going into the fight in a wounded ship, burnt and blackened inside?

1 "While the US was outnumbered by the Japanese in the number of aircraft carriers present at the battle..."  I think that might be a typo...

2 Nope.  Japanese had four carriers at Midway, US had three.  Ergo, the US was outnumbered by the Japanese in the number of CVs present at the battle.

When you count the entire campaign, the disparity was even greater. There were carriers attached to the diversion force that attacked the Aleutians: Ryuujou, Junyou

There were also carriers associated with the other flotillas attacking Midway itself: Zuiho and Houshou.

Junyou was a CV; the others were CVLs. After the fourth Japanese CV was sunk, Yamamoto gave some consideration to ordering Ryuujou and Junyou to join the Midway force, to cover the landing.

But it would have taken a couple of days for them to steam that far, and the element of surprise would have been completely gone, and in the mean time the remaining American CVs (Yamamoto thought there was only one, but that was still a lot) would have been able to launch attacks on the landing force, which had been spotted by a PBY from Midway. Ultimately Yamamoto decided it was too risky.

As to why Yamamoto thought there was only one American carrier left, it's because the pilots who attacked Yorktown reported twice that they'd sunk it. they were wrong both times, but the Japanese command counted that as two kills, leaving only one left.

But even one American CV would have bbeen a problem, and the Midway airstrip wasn't knocked out.

5 Grr, I misread your post twice before posting.  I hate to see what a mess I made of my reports at work earlier today...

6 Steven, the attack on the Aleutians was no diversion.  It was actually scheduled to begin on the same day as the Midway operation, but fueling problems delayed Nagumo's fleet.

You're certainly correct when you say that the Hosho was an aircraft carrier, and it was attached to the Yamamoto's Main Body.  However, if it had come down to it, she would have been worse than useless in combat.  She carried eight B4Y "Jean" torpedo bombers; biplanes, slower than a Devastator, fixed landing gear... think an even more obsolete Swordfish, and you've got the picture.  The Zuiho was better equipped with 6 Zeros, 6 Claudes and 12 Kates and was part of the Invasion fleet.  Neither the Main Body or the Invasion fleet were within 400 miles of Nagumo's Kido Butai... which was part of the problem to begin with, but that's a post for another day.