Before Civilization. A few weeks back, I was chatting with Ben from MidniteTease about pretty much nothing in particular when the discussion turned, as such discussions between two relatively healthy red-blooded American males often do, to the topic of videogames.
Why, what did you think I was going to say?
Anyway, Ben is currently learning how to create mods for Fallout 3.  Considering that I can use my computer to open e-mail, this amazes me to no end.  He had said something about making Deathclaws wear party hats... I think?  I might have that wrong.  Anyway.  He's doing that, and I'm still playing Fate Grand Order.  Still have yet to miss a log-in from when I began around the New Year, in fact.  I've gone from being a total clueless n00b in the game to being a total clueless vet at the game with a roster that's strong enough to carry my lame tucus to victory.
No, no, what I meant to say is that I've actually learned how to play, how to use the mechanics to my advantage, all that sort of thing.  I've spent hours reading and watching videos on the thing, and without a doubt my favorite part of the game is... a daily webcomic that gets posted on Reddit.  I've linked to Rednal's imgur album so you can read it if you want.  It just put up its 500th consecutive comic a few days ago, and also finally gave it a name.
However.  FGO is not the only thing I've been playing of late.  God help me, I've begun playing Getting Over It with Bennett Foddy.  As the creator of the game says, "I created this game for a certain type of person.  To hurt them."  I don't know if I'm the certain type of person mentioned, but it does hurt.  So very much.
But during that conversation with Ben, somehow we veered off topic briefly to floppy disks.  No, I don't know either.  But as we chatted via text, I went looking through a box of old Sony disks I have here... from my RadioShanty days, no less.  Over 20 years old, in other words.  Poorly labeled if at all, they just sat there with no way for me to access them.  And there, at the back of the box, was something that honestly took my breath away for a moment.  Or maybe it was the hot sauce on the burrito, one of the two.  Lets go with the thing in the disk box, shall we? 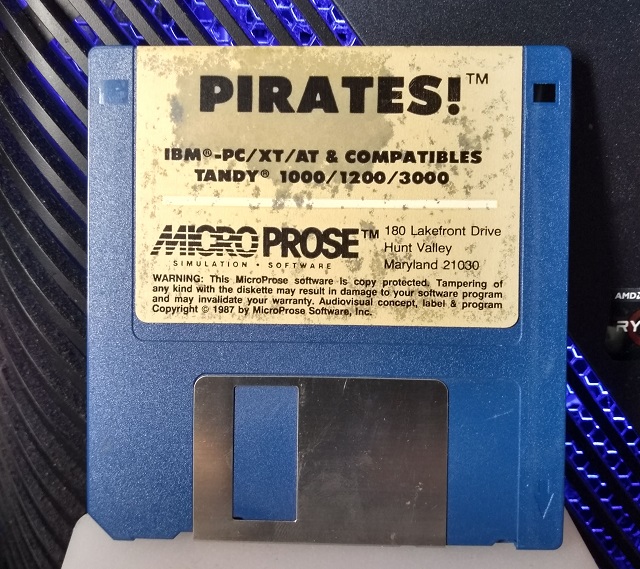 1987.  I had a 286 around about that time.  I couldn't tell you how much RAM it had... probably 640kb.  I'm pretty sure I bought this when I was in grad school, though. 1991, then.  Either way, holy crap.  You've maybe played the remake that came out in 2004 which is available on Steam, and it's really quite a faithful "cover" version.  But just think about this for a moment.  When Sid Meier made this game, he was still four years away from the release of Civilization.
That means it was literally "before civilization."  And, for all you kids out there, yes, it's before your knowledge too.  You never experienced floppys.
This is very nearly archaeology,  certainly in computer terms.  How weird it is to say that.  Anyway.  Thought you might be interested.  If not, eh, sorry to waste your time.  If you were, great, happy to waste your time!

1 I think what I love most about this is the implication that the Tandy computer line was distinct from an "IBM PC/XT/AT-compatible" system...

2 GreyDuck - they were!  Tandy graphics mode had four times as many colours as CGA.  Before VGA, a lot of PC games specifically targeted Tandy graphics.

3 This post made me feel happy.
Also, I'm not the only person alive who is older than Civilization.

4 Tandy was very definitely a "boxed-in" subset of PC-compatible. Many a Tandy user would try to share their favorite game with a friend who had some other kind of PC only to find the disk wouldn't actually read, or at least not finish loading, or the game would crash after starting.

But Tandy graphics were the salvation of budget color gaming for a few years, although you would still need to upgrade the sound card.

5 Ben, yeah, that's why for a while software went from being labelled "IBM PC and compatibles" to "IBM PC and 100% compatibles".
Then we got the whole mess of sound cards, where you had to run a separate program before you ran the game for the first time to tell it what kind of sound card you had, or you didn't get audio.  Despite all the warts, that's one thing Windows does better:  abstracting away the actual hardware so software doesn't care which sound card or video card you have.

7 Oh, EFFING SOUND CARDS. Honestly? To this very day, handling of sound is something that "PC compatible" systems still do very, very poorly. Even when it's built into the motherboard, even when basically only two chipset vendors are even still in the mix so you'd think they'd have nailed down all the quirks, even in this post Plug-n-Play world.

I spent two months late last year trying to convince my work computer not to "put the sound device to sleep." Because then I'd miss work calls because instead of actual-phones we have "soft-phones" which, you guessed it, rely on the computer making some kind of noise all of a sudden to let you know a call's coming in, but if the computer hadn't made any noises in a while, Windows just decided "oh, I guess you don't need that device anymore" until you fiddled with the volume a bunch and it decided "oh, maybe you do" and woke it up again.

My actual "working" solution was to set MediaMonkey to queue up 9 hours (8 to 5 workday) of random music and make sure the volume was loud enough that Windows didn't decide I still didn't really need the audio anymore. Which, yes, still happened even though music was being played, gorramit, unless the volume was high enough, WTF Windows?!? Ahem.

8 Wow, that's seriously messed up; I've never heard of Windows putting the sound device to sleep before.  Maybe a batch job that plays a short media clip (say, 1 second of silence so it's not annoying), set to a scheduled task that runs every 3 minutes?