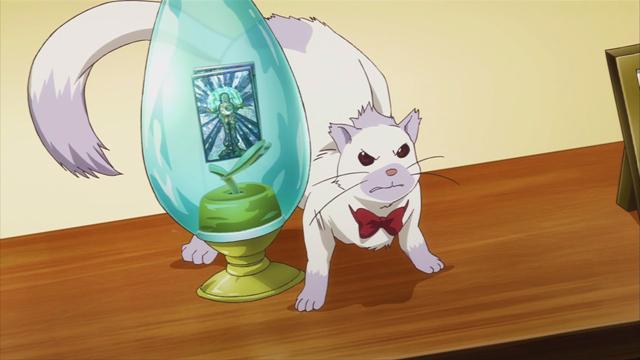 I, and by association you, are living a charmed life.  The final BD of Rio Rainbow Gate! was released on October 19th, yet the bonus OVA that was contained therein has yet to hit the torrents.  While this may be a source of relief for you, for me it's just sheer torture.  I know it's out there.  Watching.  Waiting.

Any minute now, it will, when I least expect it, suddenly appear on one of the torrent sites.  And then my life will, once again, become one of sheer torment and pain.  I will once again be subjected to the horrors that are RRG!, and like a lemming rushing headlong towards the edge of a precipice, I will be unable to do anything about it.  I will be forced to embrace the pain to entertain my readers one last time.

And yet, I find myself looking forward to the OVA.  I believe I am being irresistibly drawn to my self-inflicted agony, like a moth to a flame.  It seems so pretty and inviting and warm... then *poof!*  Moth flambe.

It's been over six months since the last episode aired.  Six months of knowing that hell will, indeed, be coming to breakfast.  It is merely a question of when.

1 I come here to be entertained. Not threatened.
(Hides under bed)

2 Don't hide under the bed like a little girl!  Hide in a panic room, like a man!

3 OVA? BD? What are these strange acronyms you spout?

Basically, there's a new episode of RRG! coming, and I'll be inflicting it upon both myself and my readers.

5 It's okay. When I see the Rio post, I will merely retreat to the bunker, grab a rifle, and wait for the chaos to blow over...

6 Avatar, I suggest stocking your bunker with Pocky sticks and some Ga-Rei Zero DVDs.  At least, that's my plan - I will remember the days or yore, when Wonder Duck reviewed good anime...

7 Well, I for one welcome the madness that is Wonderduck's RRG posts. ;-)
Yeah, I realized what "BD" probably meant as soon as I posted. Boggles me that they're not called BRs or BRDs, though, given the fact that most people say, "Yeah, I have that on Blu-Ray," not "I have that on Blu-Ray Disc".

8 Bah. I have an entire box set of Haibane Renmei that I have owned for ten years and still not watched... perfect bunker material. ;p