Bahrainian Wrapup On the ITV broadcast of the Bahrainian Grand Prix, broadcaster Martin Brundle mentioned that Lewis Hamilton was in "the last place he wants to be", moments before he plowed into the back of HWMNBN's Renault.  Immediately following the accident, he said that HWMNBN "surely must have lifted (off the gas pedal)."  The speed of the impact coming out of the turn was such that it DID look suspicious, to be fair.

He later semi-recanted his accusation by adding that they had to wait for the Renault telemetry before a serious accusation could be made, but his partner, Mark Blundell, was not so reticent, flat-out accusing HWMNBN of brake-checking Hamilton's McLaren.  HWMNBN has a history of doing just that, so it's not completely out of the question.

Well, the telemetry was released to Autosport Magazine today, and they confirm that HWMNBN did NOT lift off, nor did he tap the brakes.  Surprisingly, McLaren agreed with that assessment today as well.  They said that Hamilton's 'bridge wing' over the nose failed just before the accident, giving him an unexpected burst of speed (loss of downforce = extra speed).  As I happen to have a copy of the ITV broadcast on my computer, I went back and watched said accident very, very slowly, and saw this: 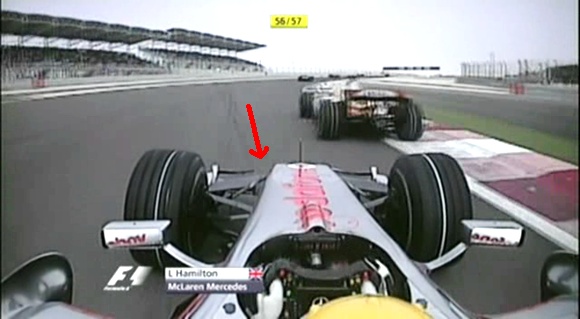 Sure enough.  In the video, that piece on the left can actually be seen flapping up and down.  In case you're wondering, as the car comes through the turn, the light and shadow changes across the nose, and that gap isn't an optical illusion. 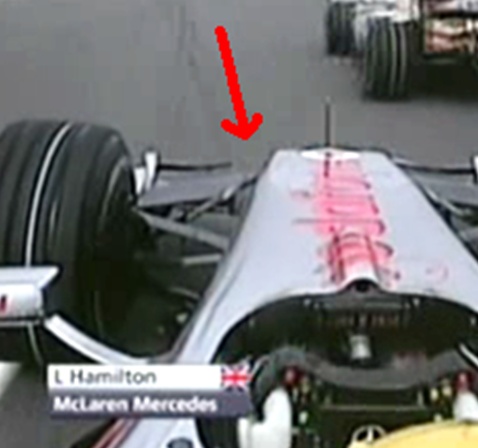 That's a closeup of the above shot.  It really isn't there... and it's visible for a few seconds just before the nose is destroyed on the rear of HWMNBN's car.   This one is nobody's fault.

We're still not taking the MOOOOO-OOOVE of the Race away from Lewis, though.

In other F1 news, Max Mosley is completely self-destructing.  It seems that after being told by the Crown Prince of Bahrain that he was not welcome, Mosley called Darth Bernie and went on a tirade, hurling epithets about the Gulf Kingdom in a very loud voice.

Sitting next to Bernie Ecclestone at the time?  The Crown Prince of Bahrain.  Who heard every single word.

Mosley has claimed that he has a number of backers in the F1 paddock, people that will support him when it comes right down to it... but not one single team, sponsor, or driver has said a single thing, except AGAINST Mosley.

Further, some of the member organizations of the FIA have begun to call for his head.  The largest of the FIA's constituent organizations, surprisingly, is the American Auto Association (the AAA)... and on Monday, they asked Mosley to step down.

Mosley's defense is that the British tabloid that started this whole mess invaded his privacy, and legal proceedings are being started against them for exactly that reason... but I'm reminded of the Stepneygate sentencing against McLaren, where the FIA's final statement says "The World Council's only concern is whether that list is accurate and truthful. We are not concerned with whether there are issues over how that is obtained. Unless there is evidence that it is forged or inaccurate, we will take it on its face value."

That shoe certainly pinches when it's on the other foot, huh Max?