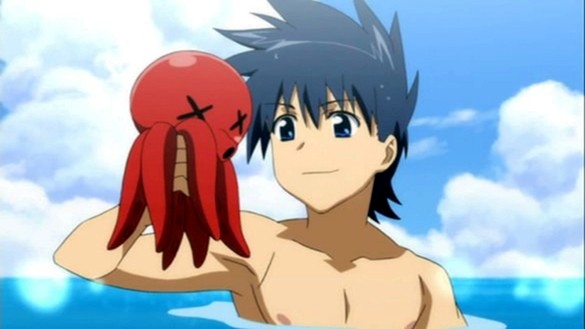 "Hey, look!  I just caught a baby octopus-thing!  I bet my twin sisters (who aren't related by blood to me at all!) will think it's cute!" 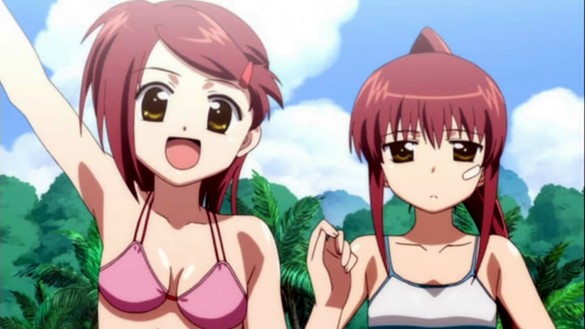 "Awww, onii-chan (who isn't related to us by blood at all!), I bet the baby octopus-thing's parent will be sad." 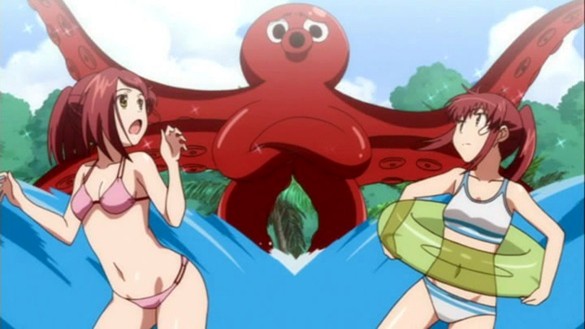 "Oh no!  A giant octopus-thing, and it's not sad, it's angry!  Whatever will us identical twins starring in an anime do?" 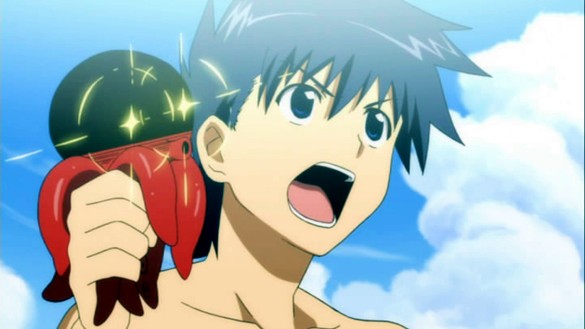 Wonderduck: "You have got to be kidding me.  Don't do it, anime, I'm warning you!"

Wonderduck: "Damn you Japan, damn you straight to hell."

To give the show Kiss x Sis credit, this episode, packaged with a volume of the manga in Japan, is lightyears better than the OVA that was released a few months ago.  While the entire concept of two sisters (that aren't related by blood to their brother at all!) that lust after their older brother (who isn't related to his sisters at all!) is, to put it mildly, icky, the execution of the show was...

...actually pretty good.  I did laugh out loud a couple of times, which is more than I can say for the OVA (which was pretty out there, ickyness-wise).  If you can forget about the main premise, and that's a mighty big "if", the ecchi is played for laughs, and succeeds about half the time.  It actually helps that the guy ISN'T into it at all, running for cover whenever possible.

But then there's that whole "it isn't what it seems, we're not really related!" thing.  Throw in the parents' wholehearted approval (to the point of mom taking bets from the neighborhood wives as to which one of the twins the guy'll pick), and it becomes really icky.

The fanservice is entertaining, I'll give it that.

NOT recommended for anybody.  You'll hate yourself for watching it, just as I do now.  I doubly hate myself for enjoying it occasionally.

1 Why did Octo-junior's head turn green?

2 (Aside from the obvious: the guy is squeezing Octo-junior in the sensitives...)

3 Look at the gleam in its eyes, then the upper left corner of the final pic...  It's gotten angry!