Y'see, it appears that those three teams may have found a loophole in the rules regarding the rear diffuser.  Nothing illegal, mind you, just perhaps maybe not in the exact spirit of the technical regulations.  Or, maybe, the other teams are just upset that they didn't think of it first. 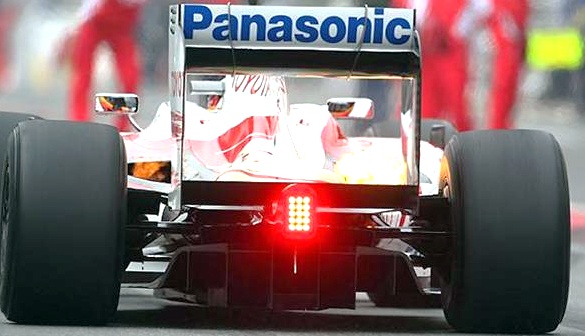 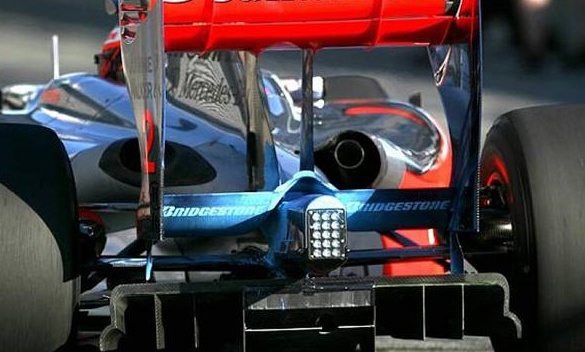 McLaren's diffuser
The diffuser is the black bit directly under the warning light, below the level of the rear axle.  Its purpose is to slow the air moving underneath the car as it flows behind the chassis, which increases downforce.  It also cleans the air up by minimizing eddys and vortices, thereby reducing drag.

The main difference between the two designs is minor, but telling:  McLaren's runs straight across, but Toyota's center section (immediately beneath the light, obscured somewhat by the glow) is arched, thereby violating the maximum height allowed.

The other seven teams followed the rules literally, as evidenced by the straight-across version demonstrated by the McLaren design.  And so, chances are good that there will be a protest levied against the "Diffuser Three".  Because it doesn't violate the rules, it will be upheld by the track stewards.  There will then be an appeal to the FIA, which won't be reviewed for at least three or four weeks.  Until that time, whatever results the teams gain will basically be provisional, with the possibility of being negated by the FIA.

Can we just have a race without any complaining?  Please?

UPDATE: Four teams protested the diffuser design.  The stewards and the FIA deliberated for six hours, then decided the design was okay.  So step one is in the books, and next will be the more formal appeal to the FIA.

1 Huh. I looked at the pics before getting to the bit about the controversy being over the diffuser, and I immediately thought it was about the extra vertical supports on the McLaren rear wing.

I can see where they have a minor quibble with the effective vertical height of the diffuser, but is there any restriction on total effective area? Sure looks to me like the McLaren diffuser is significantly wider than the Toyota.

What would an F1 race be without controversy these days?