All In All We're Just A / Nother Duck In Anime 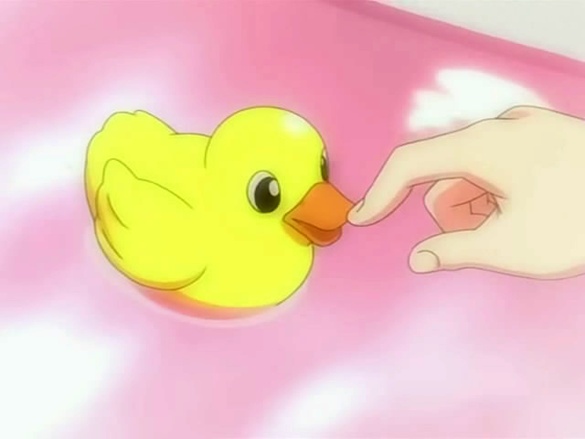 Not as good as Azumanga Daioh, but you know what?  I don't care.  While it's about high school, it sure reminds me a lot of my days as a student at Duck U, and that earns it nostalga points if nothing else.  Four likable main characters (well, 3-1/2... I'm not that fond of Miyako, for much the same reason that Tomo & Osaka are my least favorite characters from AzuDai) doing more-or-less everyday things?  For some people, bamboo shoots in the eardrums would probably be more enjoyable, I'm sure, but I love it.

I'd be incredibly shocked if it gets licensed, though.  A few years back, it would have been snapped up, no question, but now?  I just can't see it, and that's a shame.  Like ARIA, it's a perfect show to sit and relax to.  I know I'd buy it in a heartbeat.

1 The manga got licensed. I tried the anime and was turned off by the double-wide faces, but the proportions in the manga didn't bug me nearly as much, and it really is cute as hell. Got the first volume in last week's shipment and was pleased as punch, even if it's a bit thin.

Maybe I'll give the anime another try. Heck, maybe someone will license it, and I'll end up working on it from an anamorphic master, where the subtle vertical distortion will help counteract the wiiiiide faces...

2 I've had the first volume of "Sunshine Sketch" for a couple of months, and I agree: cute as hell.  The show is following it fairly closely, though out of sequence.

Which is my one major complaint against HidaSketch.  Like Haruhi, it's jumping around (one episode is in April, the next in November), but not for any obvious reason that I can see.  *shrug*  Still diggin' it, and eventually I'll be able to go back and watch it all in chronological order, so I'm cool with it.