A Pleasant Afternoon It's a little after four in the afternoon.  I'm sitting in my office at the Duck U Bookstore, having just gotten off a conference call with twenty-some-odd other managers.  It's warm and kinda humid, but I've got a fan close at hand to keep me from boiling away like liquid nitrogen in a fireplace.  And then my Assistant Manager comes in, saying "the tornado sirens just went off.  Everybody's heading to the basement." 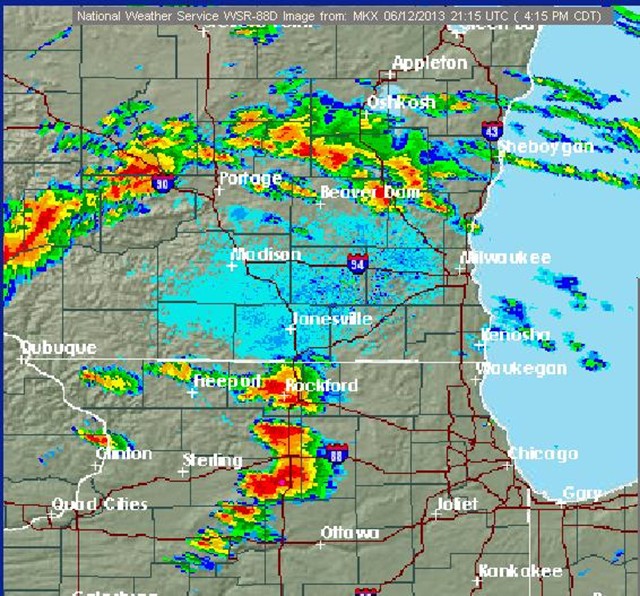 You might see the white cross next to the word "Rockford" up there... that's roughly where Duck U is located... and that big red splotch directly on top of it is roughly where the multiple funnel clouds were seen.  No reports of damage other than branches and flooding yet, but it did get somewhat tense.  Okay, a lot tense.  "Hand me my brown trousers" tense.  We sat in the basement for about a half-hour or so, half the people staring at their smartphones, the other half staring at the people staring at their smartphones.  Some gallows humor floated about: "we're all down here so it'll be easier to find the bodies when the building collapses," that sort of thing.

Obviously, we survived.  There's more storms coming through... in fact, there's a tornado on the ground as I type this, near Sterling (headed south-east, though)... but the bad stuff is supposedly over for the night.  We can only hope.

UPDATE: There was, apparently, another tornado in the same place later.  We're not talking Oklahoma-scale things here, mind you, but the National Weather Service is sending out investigators in the morning.  Looks like worst is over, but if you're in the way of this storm line, hunker down!

1 Yikes, I'm glad you emerged unscathed. Also, I offer some hearty snark about how nice it is to live somewhere that one doesn't have to worry about Mother Nature trying to punch your ticket--

*eaten by spiders* *incinerated by bushfires*

Mother Nature is not a lady to be trifled with.

3 Ugh.  At least you didn't have to line up and kneel down against the wall with your hands covering your neck, like we did back at Walker.  While you were doing this, I was busy getting rear-ended in SF rush hour traffic (no injuries, except to my car).  We people can do a plenty fine job of putting ourselves in danger, even without nature's help.

4 No, if I died because the building fell into the basement, at least I was going to go in a comfy chair.

Your car got rear-ended?  Your NEW CAR?  Aw, crap, Vauc!  Get George Lucas to repair it.

5 Yes, it was tough to look at the mangled rear end of my car.  But it took the blow for me.  Crumple zones are amazing. The other guy's insurance will take car of everything.  And now I'll be tooling around in a little rented Fiat 500 for a few weeks, which adds some humor to the situation.