A Long Time Ago Almost a year ago, there was a bit of hullabaloo over a movie that was coming out.  You may have heard of it, a little thing called Star Wars: The Force Awakens.  You may have even gone to see it, I heard it was kinda popular.  Wouldn't you know it?  Between work and just being me, I never did see it.  Yup, that's right, Wonderduck, the old Star Wars fan from waaaaay the hell back, he never saw the new film.  Thanks to a free movie weekend on one of them premium stations on my satellite dish, however, I have rectified that problem. 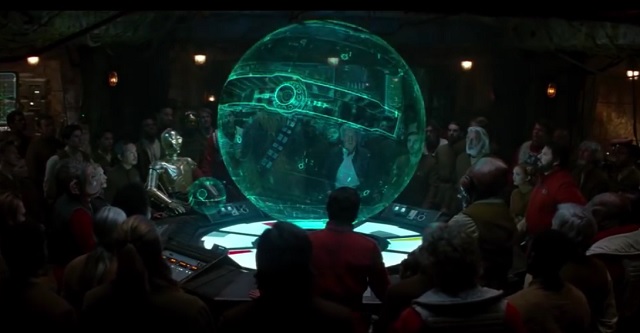 Imagine my surprise when I realized I had seen it already!  Oh, at the time it was just called "Star Wars", and it was 1977, but SW:TFA is about as blatant a copy of that first movie as you're ever going to see. 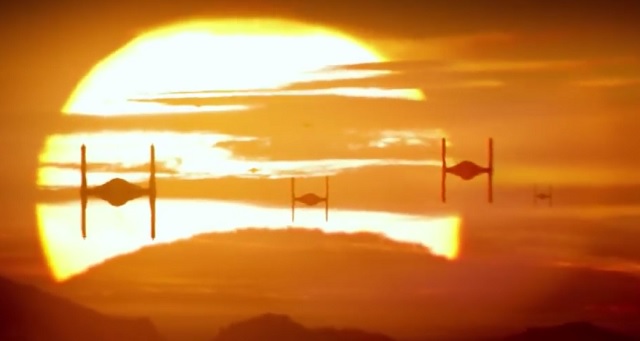 I'm not complaining.  The first English words spoken in the film are "This will begin to make things right," and if those aren't a shot across the bows of the three prequels, it's only because the shot actually hit.  Director JJ Abrams set out to put the magic back into the franchise, and the best way to do that is to make people forget about the bad movies.  What better way to do that than to take what worked and do it better?

For all that the film has been out for a year, I had managed to avoid all but the most basic spoilers... mainly the things from the trailers.  That took some doing, let me tell you.  But oh so worth it.  The scene from the trailers when the Millennium Falcon goes into combat with some TIE fighters at low altitude?  I knew something was coming, but I didn't expect it to put a gigantic grin on my face the way it did. 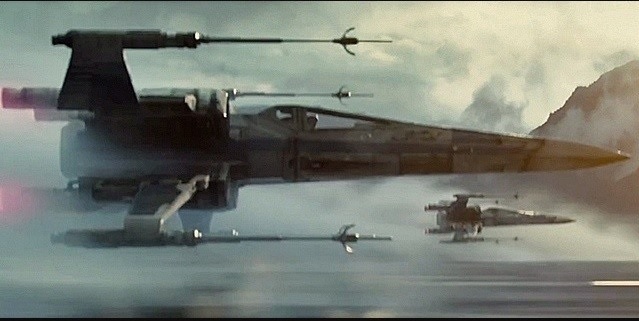 When it's action time, the film delivers in spades.  Modernized X-Wings fight updated TIE fighters, lightsaber duels, Han Solo using a bowcaster, there's even a trench run as another nod to the original movie.  Really, there's so many hat tips to the original trilogy it's impossible to see them all on one viewing... which is one of many reasons I'm glad SW:TFA is on my DVR.  But as with all good films, you're not here for the action.  You're here because of the characters...

The only thing that could have ruined the movie faster than having George Lucas involved would have been if the new characters didn't work.  Fortunately for everybody, they do... mostly.  What few fails the movie has involves them and their oh-so-witty banter.  There are moments where I wanted to curse the name of Joss Whedon for making the "overly cool snark" school of dialogue popular, even though he has nothing to do with SW:TFA.  Nothing directly, at least, but some points in the script are pretty much lifted straight from Buffy or Firefly, and when that occurs, it doesn't fit quite right.  Even if you didn't know it in advance, it's pretty obvious that this is the first film of a series though, because we don't learn diddly-poo about backstories of any of' 'em.  Except for Finn, the ex-Stormtrooper, we learn his entire life story.  Not hard to do when a life story is "taken from family as a child, trained to be a Stormtrooper since then."  Rey, the nominal lead?  Well... um... she was left on a planet bysomeone, and has lived there all her life waiting for them to come back.   Poe, the Resistance's hottest pilot?  That's about it, really.  But there's still time to learn about them, and in the meanwhile, we've got all the characters from the first movies back! 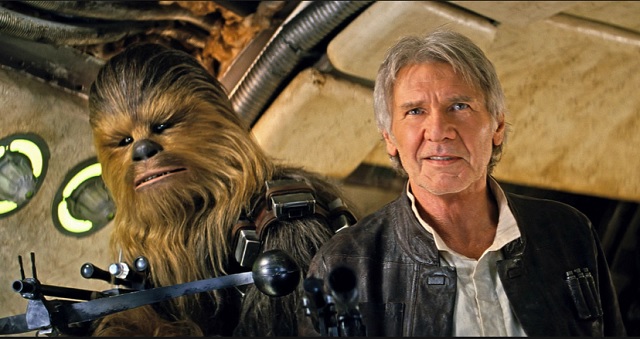 In a movie packed with great moments, this is probably the best of 'em...

Sure, they're older, but aren't we all?  It was nice to see 'em all in the roles that made them legends.  They certainly kept up with the kids... or, really, vice-versa.  Whichever.  It all works.  I went into it hopeful, and 2-1/2 hours later I wanted to watch it again, so I guess that's a good sign. 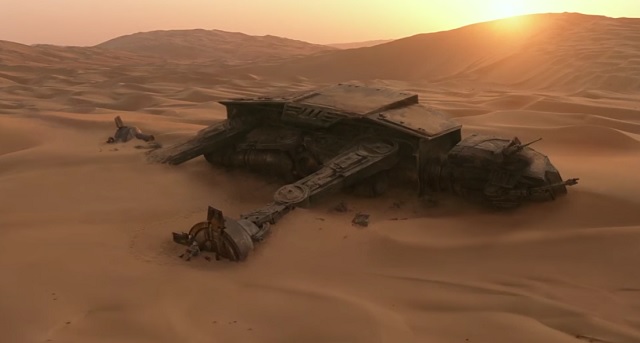 I'm not fooling anybody, am I?  My GOD that was fun!  The bang and the whoosh and the Falcon did that thing and X-Wings over the lake and lightsaber duels at night in the snow and... and... and...

1 It's a joyful movie, and I'm chagrined that I have yet to acquire a digital copy (or shiny platter) so I can see it again (and again). Not that it's perfect. We agree on some of the weaker points. But... dammit, if you're going to deliberately push my fandom/nostalgia buttons on purpose, at least do it RIGHT, and this movie does it very right.

2 Guess I'm the rain on the parade.  I just couldn't get past the wooden new characters and lack of history for most of them.   The inconsistent science fails.  The lack of explanation of how there's now a Republic, an Empire, a Rebellion, and the First Order. The ridiculousness of a planet-sized Death Star that eats, well, stars.   Hyperspace straight out of a docking bay (so why didn't Han do that the first time he escaped the Death Star?); not to mention how they made him such a failure at smuggling (got his spaceship stolen, two gangs after his head, got his crew eaten by his cargo).

It had the form, but not the feel.

3 I enjoyed this movie a lot, but I am waiting to see the sequel to decide whether or not it ranks up there with the original three.  In particular, I want to see how they explain Rey's rapid mastery of Force powers.  There are a few fan-theories for this that sound intriguing, but will the movie answer be as satisfying?

4 I'm very much of Ubu's mind.  It had the form, and, damn, the movie did that well.  But the lack of internal consistency took me out of the movie.  Rey as a character really bugged me, and I would really like to hear Abrams' directing notes for Daisy Ridley:  "OK, I need you to look MORE confused and hurt.  No, even more than that.  MORE.  I need your forehead wrinkles from your facial expressions to literally spell 'traumatized orphan.'"
I liked Finn.  And Kylo Ren.  And what I'm assuming is the whole idea behind Smoke Snoke.  And, again, the movie is beautiful.  But my interest in the sequels is almost entirely to see if I've predicted the entire story line correctly.

5 Political virtue-signalling was also a bit explicit. I'm not going to watch Rogue One now.

6 Ubu, the galactic political landscape is... barely... touched on in the movie.  The Empire as we knew it is gone.  Playing the role of the Empire is the First Order.  Where the First Order came from is not mentioned in the film... though, according to the canon novel "Aftermath", the Empire fragmented after Endor.  The "Imperial Remnant" made a grudging peace (or not shooting) with the New Republic, while quite a few admirals wound up jumping into the Unknown Regions to follow an unnamed Moff.

Years pass.  The New Republic signs a buncha treaties with the Imperial Remnant.  They soon demilitarize.  And then the First Order returns to known space and quickly absorbs (i.e. shoots in the back of the head) the Imperial Remnant and begins to be obnoxious.  Princess Leia tries to convince the New Republic to rearm, but her pleas fall on deaf ears... so she forms the Resistance to keep the First Order in check.

You know what happens next.

Again, it's be swell if this was actually in the movie... apparently some of it was covered in deleted scenes... but that's what we've got.

8 I haven't read the book myself, so I have no idea how the Republic could be so stupid as to demilitarize in the face of an opponent who has been known to shoot entire worlds in the face with a giant lazor.  I'm sure it seemed like a good idea to someone at the time.

9 "...the Empire fragmented after Endor. The "Imperial Remnant" made a grudging peace (or not shooting) with the New Republic, while quite a few admirals wound up jumping into the Unknown Regions to follow an unnamed Moff."

I haven't read the book "Aftermath" either...but I've read a book that contains this story line, more or less.

Although it was a Grand Admiral rather than a Grand Moff.

I'm really not trying to be terribly snarky...but that *does* seem a bit familiar...

10 It's not who you think.  It really isn't.  After all, they said he'd never show up in official media.

11 I don't doubt it.  But I still expect the entire new trilogy to look extremely familiar, including some of the major elements of the expanded universe that technically don't exist anymore.
However, I gave up on Star Wars canon a long time ago.  Even within the expanded universe.  To me, the two greatest EU characters ever created were Thrawn and Revan.  One has been "officially" deleted, and the other was canonized in such a way as to render the character meaningless.
I'm....meandering, now.   Sorry.