A Little Housekeeping I'm currently working on the post for Ga-Rei Zero, Episode 03.  It's a remarkably time-consuming process.  I take roughly one screenshot per minute of running time per episode (25-30 screencaps per 24 minute show), plus variants for many of them.  For example, let's look at this shot: 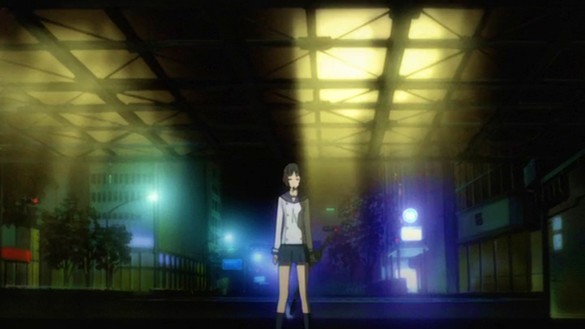 I actually had five different versions of this picture.  The only differences were the positions of the "overhead lights" (she's actually standing underneath an overpass, and as cars went over, the lights moved.  No, I don't understand how the highway bridge is see-through either, but it's a neat look).

Then, of course, I have to adjust the saturation, contrast, and size of each screencap as well.  ZoomPlayer's snapshot feature is good, but the resulting pictures sometimes seem washed out; maybe it's just me, though.  Then comes the uploading of each picture, and THEN I get to write a thousand words around them.  Each writeup seems to take between three or four hours all told, not including the initial viewing of the episode.

In other business, there's little going on in the world of Formula 1 at the moment, but that'll be changing very soon.  The first Preseason Test session is February 1st at Valencia, and many of the teams are rolling out their cars just ahead of that date.  Ferrari, for example, will debut their car to the press on January 28th.  Of course, I'll be doing a F1 Pr0n entry for each one!

Fortunately for my sanity, the motorsports season is just about to get underway.  First there's the Barrett-Jackson Scottsdale Auction, which begins on the 19th.  Legendary Announce Team member Bob Varsha is the head voice for SPEED's coverage, and it's great to see all those cool cars.  Then we get the Rolex 24 Hours of Daytona on January 30th.  I love watching the 24-hour races, and the Daytona one is pretty much the unofficial start of the American motorsport year.

So, yeah, that's what is going on over here at The Pond at the moment.  Only 54 more days until the first practice for the Grand Prix of Bahrain!

Portland is a land of many bridges, because a major river runs right through the middle of the city. In addition to two highway bridges going over it, there are like 7 or 8 street bridges. All of them are at least 50 years old. (The Burnside bridge still has rails on it left over from when this city had a major trolley system.)

All of the bridges are either really really tall or else they're draw-bridges of various kinds, because large ships use the Willamette River. One of those draw bridges is the Hawthorne Bridge.

...and now I get to the point. The road deck of the Hawthorne Bridge is a metal grill work. I always hated riding my motorcycle over it because it felt like the bike was moving left and right with the grain of the grill work and I was afraid I'd fall over.

I'm not sure why that was done. None of the other bridges are like that. But if you were in a boat underneath it at night, you would be able to see cars going by overhead.

2 Is the Hawthorne still a functional vertical lift bridge?  I've always been impressed by those, ever since I saw my first one in action, the Stillwater Bridge.

Yeah, and it's not the only one we have. The Steel Bridge is also a vertical lift bridge. That one's even cooler, because the railroad part (at the bottom) can be lifted without lifting the roadbed.

Most of the other draw bridges here are bascule. (I had to look that word up.)

The Sellwood bridge doesn't have any such function, so that's as far upstream as tall ships can go. Beyond that it's all tugboats and barges, as far as commercial shipping is concerned. Which is further limited by Willamette Falls at Oregon City, which you have to use locks to get around.

5 Ah! And the Interstate Bridge on I-5 (across the Columbia) is also a vertical-lift bridge. I guess they really used to like building those around here!

6 When I was driving through Portland on the way to Seattle and saw the sign reading "bridge open", I misunderstood.

I've seen a few bridges with metal grate instead of roadbed.

The <a href="http://en.wikipedia.org/wiki/Mackinac_Bridge">Mackinac Bridge</a> (suspension bridge similar to the Golden Gate Bridge in size) has the inner two lanes of metal grate, and the outer two lanes of asphalt over roadbed.

I've felt my car do a slight left-right-left wander over that metal grate.

I typed in the hyperlink, instead of using the "link" tool in the comment box.

Swing bridges like the 1903 model over the Cuyahoga also have metal grill roadways, not just lift and drawbridges.  I learned the hard way not to look up while passing underneath that one...  But that's another story...

Gotta be a weight thing, but the Cap'n (of the Clueless) is the closest thing to an injuneer we got here (I think) and I won't trespass on that turf...