A Bad Day In Duckford, One Year Later One year ago today, a series of severe thunderstorms rolled through the Duckford area, knocking down trees and electrical power all over the city.  The third storm of the day dumped four inches of rain the space of about an hour, a deluge that caused flooding in low-lying areas (and some high-lying areas, too, come to think of it).

It also caused this:
In case you can't tell what's going on in that video, that's taken from a police cruiser's dashboard camera, and it's filming water flowing unimpeded underneath a set of railroad tracks that had had its roadbed washed away.  Twenty minutes after that video was shot, a Canadian National train pulling 110 cars, including 70 tanker cars full of ethanol, rolled over that crossing.  Eyewitnesses reported that the train was actually bouncing up and down as the track deflected under its weight.  12 cars derailed and exploded.
This accident, which occurred about a half-mile from Pond Central claimed the life of one motorist, injured a few others, and forced the evacuation of around 600 homes.  If Pond Central had been much closer to the accident site, I would have been evac'd, too.

One year later, the site of the accident is much improved. 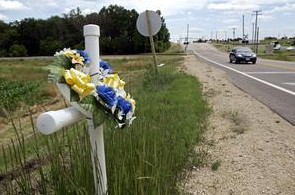 The roadbed for the crossing has been strengthened, the pavement for the street replaced and relaid, and much of the terrain was replanted with grass.  The local fire department now trains with a few of the derailed cars, practicing for the next big fire and hoping it never comes.

But many of the trees near the derailment site still show signs of having being burned by the blaze.  And just off the tracks is a small cross, in memory of the woman who was killed in the incident, Zolia Tellez.  I drive by the site once or twice a day, and imagine what it must have been like... and count myself lucky that I wasn't there when it happened.  I could have been, and on a normal Friday I would have missed the incident by only an hour or so.

The NTSB is still investigating the accident, and their report isn't expected for another six months or so.  A rash of train crashes, including one bad one in Washington DC a few days after the one here in Duckford, has 10 NTSB train specialists working 16 cases.  The EPA has found traces of ethanol byproducts in the local drinking water, but far below any amounts that they declare to be dangerous.  The massive fish die-off that occurred a month or so after the accident in a nearby river is still completely unexplained.  And every now and again, a train comes through on the new rails.