"...and Screw This Whole Area In Particular." 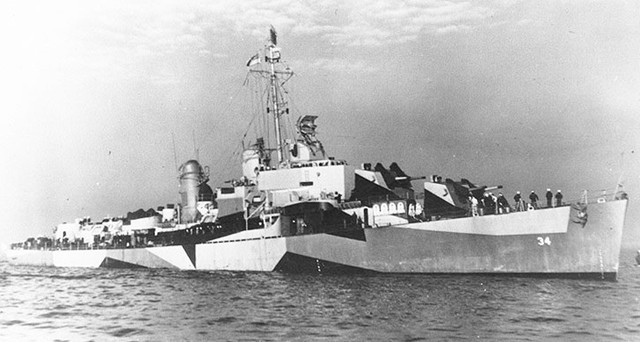 It's hard for a ship to look proud when painted in Measure 32, but somehow the USS Aaron Ward (DM-34, ex DD-773) pulls it off in this picture.  Like James Bond, martini shaken not stirred, dressed in a clown costume.

Originally a Sumner-class destroyer, the Ward was taken in hand right after launching and converted to the last of 12 Robert H Smith-class minelayers.  All the conversion did was remove the torpedo tubes and add minelaying equipment (which, it might be noted, was never actually used by any of the Smiths in WWII).  Otherwise, they were treated as any other destroyer.  Joining the fleet at Pearl Harbor on February 2nd, 1945, she received additional training in and around Hawaii before joining TF 52 at Okinawa on March 22nd.  She served there for around a month, leaving station occasionally for supplies and such.  On April 30th, 1945, she took station at Radar Picket #10 off the coast of Okinawa.  She beat off one attacker early in her stay, but bad weather kept Japanese aircraft out of the sky for a few days.  That all changed late on the afternoon of May 3th.  From roughly 4pm to around 730pm, she was attacked by at least a dozen kamikazes.  Of those, she was hit by six. 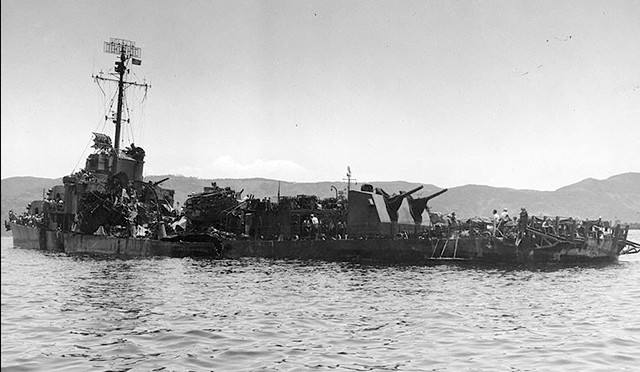 Gone was the neatly turned-out destroyer-minelayer.  Left behind was a legend. 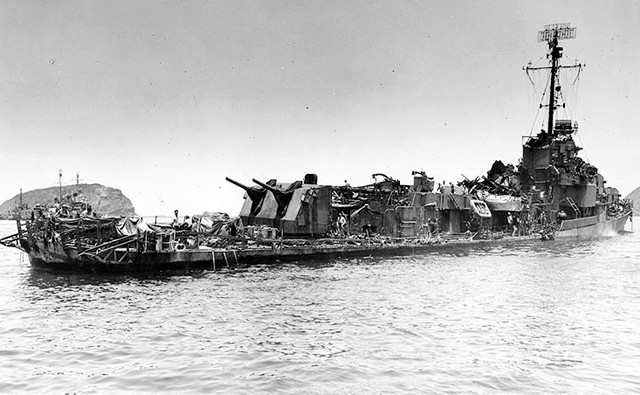 27 of her crew were killed in the attacks, but the ship was saved.  Arriving in New York under her own power in August of 1945, she was judged not worth repairing.  She was decommissioned in September of that same year, and scrapped in 1946.

1 Why did they float that all the way to New York?  Were there no closer scrapping yards?  I'm amazed it didn't sink or roll over in the next significant storm.

The Navy problem sent her to New York because they wanted to keep the West Coast yards available for priority jobs (Read: relatively fast repair, and normal overhaul work.).  Any ship that looked like it require long term reconstruction would be sent to the East Coast yards, especially since space was opening up with the cancellation of a lot of new construction.  The Navy made the same decision with USS FRANKLIN - there is at least one photo, taken from the FRANKLIN's flight deck (Or what remained of it.) as she arrived in New York.

The decision to declare the WARD a constructive total loss later was almost certainly after the shipyard had a detailed look at her, and Navy could compare what the repair would require versus the number of destroyers they had...

3 Another reason is that the war was over, and everyone knew the navy was going to be shrinking. A ship in that kind of condition wasn't worth saving when ships that hadn't seen combat were going to be getting decommissioned.

A number of destroyers under repair when the war ended were scrapped on the dock for the same reason.  The ready availability of replacement also help determine matters (The Royal Navy, as well as the USN, had even during the worst periods of WW2, decided that some ships just were not worth the time and effort to repair.).

One thing that has arisen from reading my copy of Nelson to Vanguard is why the USN bothered using the machinery plant from CASSIN and DOWNES after they were more or less destroyed at Pearl Harbor.  Reusing their reduction gears would have been very worthwhile, and the weapons would have reduced the cost, but their power plants were noticeably inferior to the destroyers being launched at the time.

5 I think it's important to point out that not all shipyards are created equal. There were cases in the war where American subs in the Pacific took tremendous damage without being lost, and they sailed to Connecticut for repairs.

There were cases in the war where American subs in the Pacific took tremendous damage without being lost, and they sailed to Connecticut for repairs.

Given that only 4 yards participated in the fleet boats program for the US Navy during WW2, none on the West Coast - and one was too much of a hassle to reach for repair work - that is not surprising.

IIRC, there was only two yards on the West Coast engaged in the construction of destroyers or larger warships, but quite a few more that could essentially rebuild a warship - and did.

Oops, I forgotten that Mare Island was part of the fleet boat program.  That meant that fleet boats that could be repaired relativerly quickly and regular overhauls would have been done on the West Coast, but any subs needed extended yard work would have been sent to points east.