To The Mun III: Rescue Bill Kerman! After the truly Kerbal Space Program-level success of my Mun landing, it was time to go rescue the first Kerbal on the Mun.  Which meant, of course, designing a new Mun-ship! 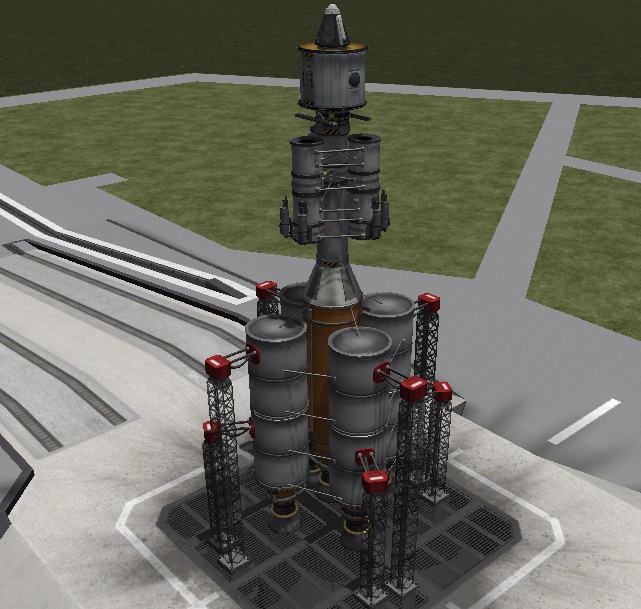 Presenting the cleverly-named "Mun Rescuer I".  It didn't take very long to come up with the design, since it's simply Mun Launcher I with a PPD-1 Hitchhiker Storage Container ("The HSC was an invention of necessity - how do we store 4 Kerbals on-orbit without any real provisions for return? Who needed this remains a mystery, as do his motives.") stuck under the Mk1 capsule, more fuel cans and six landing struts.  No way this baby's gonna break off the nuclear rocket, nuh-uh!

In retrospect, I probably should have spent a little more time on the design phase. 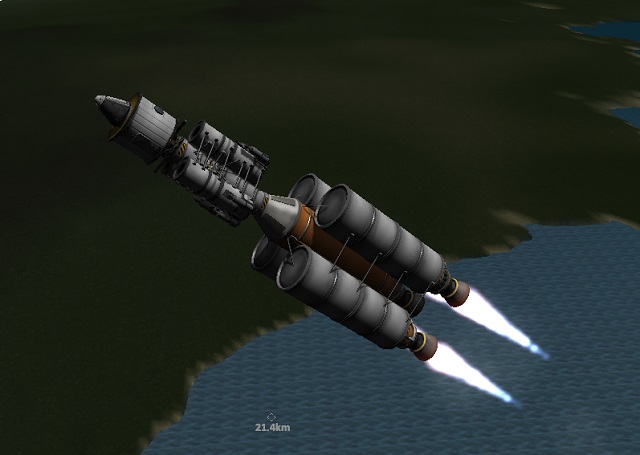 We're go for the Mun!  It wallows into the gravity turn like a really happy pig in really great mud, but for all of that, Mun Rescuer I seems to fly pretty well.  There's a lot of pogoing, but otherwise it's about a kilometer behind where Mun Launcher I was at the same fuel level, give or take.  Everything seems to be going well, until the "GetMeUpHigh" stage is about to run out of gas.  As I've done with Mun Launcher I in the past, I bipped the throttle up to maximum, so as to get every erg of force out of the four main engines before fuel exhaustion. 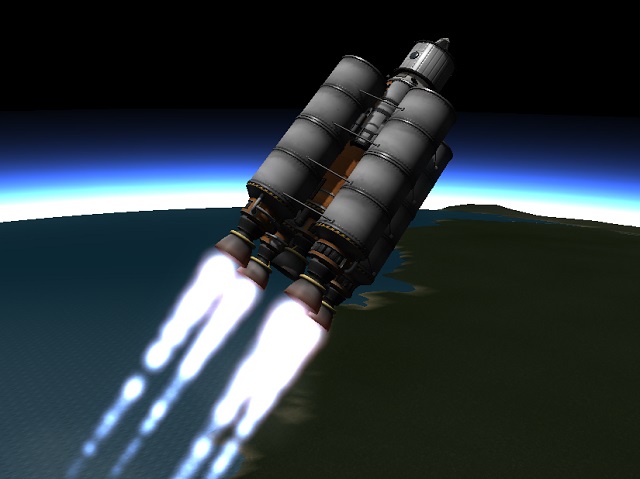 Oh.  This may not be a good thing at all.  If you're not sure what you're looking at, the rocket is now substantially shorter than it had been.  The entire Lander stage has sunk into the Orange Can of Fuel, with soon-to-be expected results... 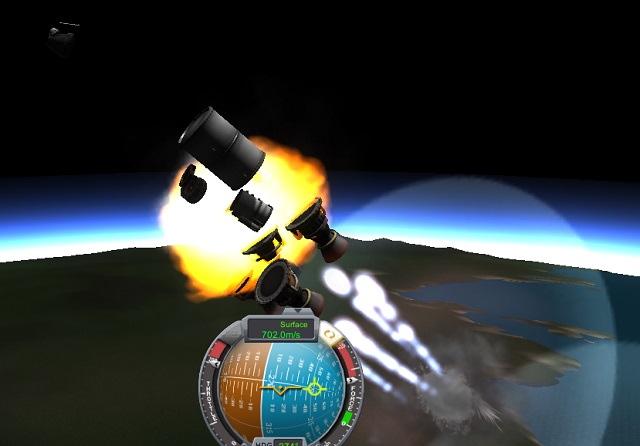 I am not going to the Mun today.  On the plus side, the capsule containing Hot Pilot Jebediah Kerman has survived, there in the upper-left corner, as has the parachute for same.  On the negative side, I've now had the exact same thing occur four times, all at roughly the same moment in the flight profile.

A substantial redesign is needed if I'm going to rescue Bill Kerman from the surface of the Mun.  It's almost literally a case of "back to the ol' drawing board!"  But this setback does not deter the Kerbals one bit... in fact, it's more what they expected to happen: big noise, big flash, big boom, little pieces.

1 Bill will just have to hold his breath until he turns green, and his eyes bug out.

Well, hopefully he can do science reports.

2 I need to strand a Kerbal or three out somewhere just so I can have the fun of trying to rescue them, but so far my flights have either been successful, or fail so spectacularly that there are no stranded Kerbals to worry about.

3 Some of my heavy-lift vehicles have to be flown to orbit at less than full throttle, otherwise they'll self-disassemble somewhere around max Q.  The Mainsail engines are mighty beasts and demand respect.

4 And I do mean heavy-lift vehicles, like this one used to boost the components of my permanent Munbase.
(Hooray I can post comments with links again!)

5 That's am impressive lifter and Munbase, flatdarkmars.  I haven't built anything like that yet, I need to get into that stuff soon.

6 I can honestly say I've never had so much fun reading posts from people playing a game that I'm unlikely ever to actually own on account of it requiring mental faculties I completely lack. The Royal Squirrel Patrol Space Force entries and these adventures of Wonderduck's are an absolute hoot.

7 Does the program name the kerbalnauts, or does the user?

However, your first three Kerbalnauts are always named Bill, Bob, and of course the legendary Jebediah.

The actual name generation rules can be found here!

9  That's a pity, because it seems to me that one of them ought to be named "Clem". It just seems like the right kind of name.

10 So that means that when someone seems to be using a kerbelnaut with a different name, those in the know can snicker because it means that they've been killing their kerbelnauts (which isn't easy because they're so hardy), right?

11 It doesn't necessarily mean their Kerbals are dying... the Munbase linked above holds 25 Kerbals, which necessitated a bit of a recruiting spree.  But it certainly could be that old Jeb, Bob, and Bill have been shuffled off if they aren't in use.  Kerbals may be hardy where air, food, and water are concerned, but they don't stand up very well to abrupt lithobraking maneuvers.

12 By default the game will put Jeb in your capsule if it only fits one Kerbal, and Jeb, Bill, and Bob if it fits three.  But there is an astronaut academy where you can recruit plenty more of them, and there isn't any kind of limit on how many active Kerbals you have.  In my case I use Jeb, Bill and Bob for the dramatic stuff that I expect to succeed, and use lesser Kerbals for stuff that is likely to blow up or is just a repeat of a mission I've already done.

13 The game does keep track of your various Kerbalnauts... for example, it won't let me use Bill, since he's currently waiting for rescue on the Mun.

I want to get him back, since he's one of The First Three who get the orange jumpsuits.  All the rest just get gray ones.

14 GreyDuck, I'm glad you're enjoying the posts.  But don't let a fear of needing high brain power keep you from playing KSP.  It's not like we sit down with calculators and spreadsheets and figure out the technical details of a rocket.  The Kerbal way is to slap together a bunch of rocket parts, put it on the pad, and see what happens.  After you've used a given engine part a few times, you get an impression of how powerful it is, how long it burns, etc.  Then you can think while building your next rocket "can that engine lift this stage?  Probably not-add more of them!"  Then you look at the wild array of tanks and engines and decide whether it will hold together, whether you can keep it pointed straight, etc, etc.  Most of those things you will consider you will learn from the experience of the previous rocket where you couldn't.  But watching a rocket violently dissassemble itself and send booster flying all over the sky is part of the fun.

15 I watched one youtube video where a guy designed and built a rocket to get him to Duna (aka Mars) and back.  He did it on the fly, without any references, and with a highly limited subset of parts, in about half an hour.  His first attempt to get to Duna with it failed, but it was because of his piloting, not the rocket.
I just spent a few hours designing, building, and testing the rocket that I hope will get Jeb to Duna and back.  That's after I spent a few hours last night doing the same thing before realizing that my basic concept simply wasn't going to do it and starting over.  The rocket I just came up with weighs nearly a kiloton, and meets my first criteria, which is to get my lander and return vehicle to orbit without using any fuel from the transfer stage.  I'm pretty sure the transfer stage is massive overkill for a trip to Duna, but I won't know if the lander and return vehicle can do their job until I try tomorrow.  If not, then I get to build a rescue mission, which will be fun.

16 ...I'm unlikely ever to actually own on account of it requiring mental faculties I completely lack.

You think I know anything about what I'm doing?  I don't even know three-quarters of the basic instructions of the game, and I'm still having a blast.

Quite literally in some cases.

This can only end in tears. And/or "rapid self-disassembly." And/or "lithobraking," which may be my favorite new word of the year.