The Return of Anime Night! It's been a long while since The Librarian and I have gathered at Pond Central for dinner and some anime.  Over the past few months, life has just gotten in the way.  Oh, we've gotten together every now and again for dinner, but the legendary Anime Night looked to be a thing of the past.

Until tonight.  Tonight saw the return of the tradition.  Dinner from Panda Express, a long bit of conversation and laffs, then four episodes of some series.  But what series?  It's been so long since the last Anime Night, we decided to start something new.

That was the comment uttered by The Librarian after the first episode of our new show.  And what show was it? 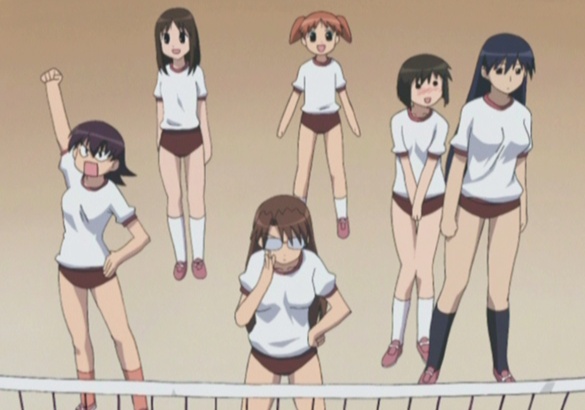 YES!  Yesyesyesyesyesyesyes!
Azumanga Daioh has long been my acknowledged favorite anime, but it's been a couple of years since I last watched it.  The Librarian has seen an episode or two, but a really long time ago... so this promises to be a really enjoyable few weeks.

To be honest, I had forgotten how much fun AzuDai is... and just how good it is, too.  The animation quality is still quite good for a seven-year-old show (it suffers in comparison to, say, Gurren Lagann or Clannad, but so do most series), but there are many more still-shots than I remember.  Sound and music is excellent, but there's no question the heart and soul of AzuDai is the characters... and those don't suffer from age in the least, and likely never will.

A better ensemble cast you will never, ever, find.  Just a bunch of kids and their (eccentric) teachers, going through life in their own way... without angst, without serious problems, just enjoying themselves.  Just what this tired duckie needed.

I bought the Azumanga Daioh box set after reading your glowing reviews. Maybe it's time to get it down off the shelf and watch it!

2 Darn skippy, Mike.  You'll not regret the time... just make sure to clear your schedule, because there's a good chance you'll wind up marathoning the series.

3 So, when Osaka dropped her handkerchief, did you laugh or cry (The Litmus Test of Azumanga Watcher)?

5 Myself, I don't recall reacting either way.