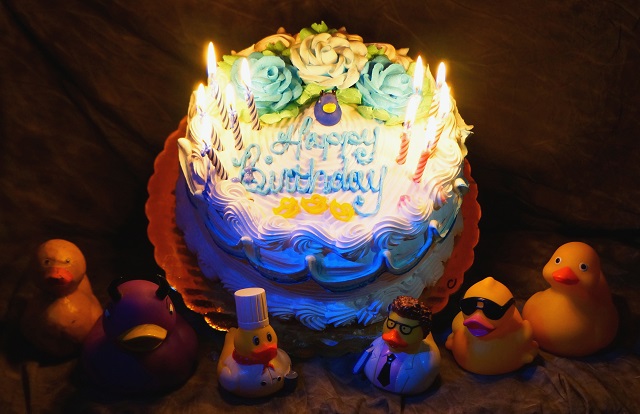 This was actually the second iteration of The Pond, historically enough.  I originally began posting over on Blogger due to the prodding of the Official First Reader of The Pond, Mallory.  At the time, it was almost entirely Formula 1 stuff, with a little "life of a Duck" thrown in as well.  However, soon enough I wrote a little something about Azumanga Daioh, that apparently caught the eye of our Australian magical girl, Pixy Misa.  Pixy took pity on this poor duck and offered him space on the MuNuVia servers and a way out of the Blogger slums.  Of course I jumped at it, and the rest is a decade of history.

Ten years.  A lot has happened since 2005... good and bad... but through it all, the people I joshingly call the "Pond Scum" have been there.  Well, no, that's not entirely true... the Pond didn't take off until I annoyed SDB enough for him to start linking to me.  THEN the Pond Scum arrived.

And I couldn't be happier.  I've had a lot of fun writing the Pond, I've "met" a lot of great people, learned a lot of stuff, and managed to do something that only an infinitesimal percentage of bloggers have done: kept going for 10 years.  The Department of Pulling Statistics Out Of Our Arse tells us that only one out of every thousand blogs make it to their second month, one out of every 100,000 makes it a year... and one out of every gazillion lasts a decade.

Even better, you guys don't seem to have gotten tired of it yet!   I may not be writing as often or as long as I used to, but the Pond Scum keeps coming back.  I couldn't be luckier.  Thank you, each and every one of you.  Yes, even you.  And you, there in the back holding the grapefruit and chicken.

I hope to have a retrospective post up tonight eventually (I had a seven-hour long certification test at work today.  As a result, I feel slightly less than chipper).  For now, though, let's put on our party hats, have some cake, listen to '80s music, and generally do silly things.  Thanks, guys.

In addition to those amazing statistics you totally didn't just make up, think of all the folks like me who just wander around commenting without even having their own blog... then you're even better!

2 Happy anniversary, and congratulations on your first ten years.

6 Mine's about to enter those awkward teenage years. They grow up so fast.

7 Happy to see that Rusty made the party.

8 Rusty II is the party.