The Decoy Game It was 1945, and the good news was that the end of the Pacific War was near and everybody in the US knew it.  The bad news, however, was that it seemed like the Japanese didn't know it, and still thought they could come out of the situation with something like a victory.  Places like Okinawa and Iwo Jima made it clear to US military planners that the inevitable invasion of Japan was going to be a horrible bloodbath, and that was just on the Allied side.  The catastrophe it would bring down upon the Japanese military could not be described, and the civilian costs could not be imagined.  It was expected that whatever fleet moved to invade the Home Islands was going to find itself swamped by thousands of kamikaze, and if one out of ten made it through the Big Blue Blanket, the Invasion force could die before it ever set foot on land.

So the planners decided: let's have a decoy fleet!  It can mimic the radio broadcasts of an actual invasion force, and the appearance, without all those pesky potential casualties.  Once everybody stopped laughing, someone said, "no, really."  With nothing better to do, it was decided to see if it could actually work. 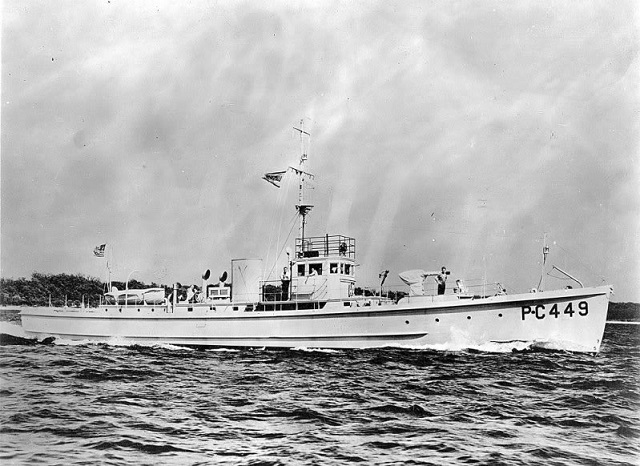 Sub Chaser PC-449 was a one-off ship, being built as part of a design competition to replace the WWI-era PC-1 sub chaser class.  She tipped the scales at about 85 tons, and could move her 110' length along at a whopping 17kts.  Built in 1940, she went to sea with 27 souls.  Her hull classification changed to SC-449 in 1943 and she carried a 3" gun to complement her depth charge launcher.  She was a particularly small ship to go in harm's way aboard.  She was also, if truth be told, surplus to requirements; it's not like there weren't literally hundreds of other ships in the US Navy that could do her job.  So in 1945, she was selected to go into the shipyards as part of Operation Swiss Navy.  Her part of the job?  To become a Bogue-class CVE. 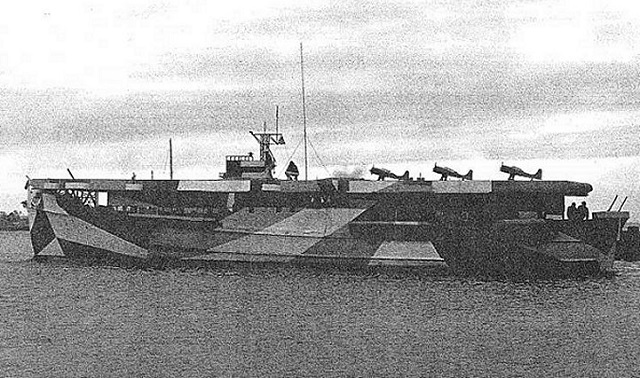 The shipyard (okay, probably just a few guys with hammers) stripped off everything above decks (guns, bridge, stacks, etc) and put a plywood "flight deck" overtop of everything.  The overall size of the ship can been seen when you realize that there's a man crouching next to the "island" and he's the same height.  So, yeah, it's nigh on 500 feet shorter than an actual CVE, who's it going to fool? 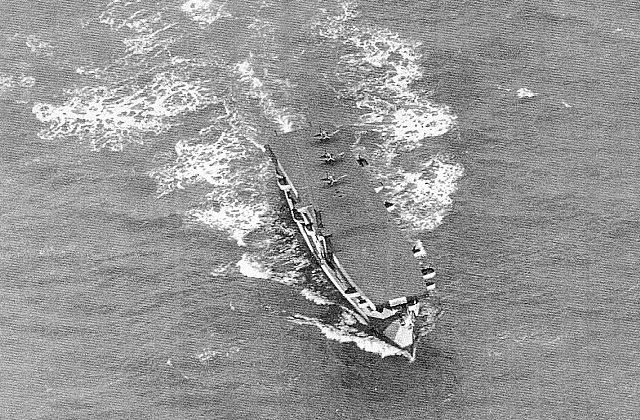 Operation Swiss Navy was eventually going to include battleships, cruisers, carriers, all of them based on sub chasers or other small craft.  Of course, there's no way it'd look right next to a real CVE... much too small, obviously... but amongst others of her own kind?  Imagine you're a frightened kamikaze pilot, prepared to die, on your last flight.  You're trying to grow another set of eyes as you look for Hellcats and you suddenly see, far below you... PC-449.  You'd think it was a full-sized carrier, wouldn't you?

The Invasion of Japan never happened, so Operation Swiss Navy never came to flower. After the war, PC-449 was sold to a the civilian sector, where she ended her life as a research vessel for Texas A&M.  She was finally scrapped in the '70s... one of the last CVEs to go to the breakers... and certainly the smallest.

1 Huh.  I didn't know it was anything beyond a test. Cool!
I'd like you to do an analysis of the application of Rule 34 to religious imagery and the potential for the associated blowback  to influence the November elections.
....or
Something about Finnish Buffaloes.

2 I'd like to point out that at the Battle of Leyte Gulf, the Japanese found a force of CVEs, destroyers and destroyer escorts and thought they'd found fleet carriers and battleships. It's extremely easy to make a mistake on ship sizes in the heat of combat.

3 By the way, I love "Operation Swiss Navy"!

At least the US Navy did not repeat what Churchill ordered during Big Mistake Number One, turning a number of full size merchant ships into decoy ships of the Grand Fleet.

During the landings in Southern France, Douglas Fairbanks Jr. commanded a group of small craft that had been assigned the job of pretending to be part of the Allied landing force and diverting German attention and forces away from the actual landing beaches.

And in the Battle of Samar, part of the reason why the CVEs of Taffy 3 survived was because the Japanese had gunnery and fire control errors because they never corrected their belief of that the carriers of Task Force 38 what they were shooting at.

I was wondering how the crew would feel about being a target. But I guess there are several things going for them: it's a small target so not easy to hit. And they'd be very maneuverable, so they'd be able to dodge. Having a kamikaze hit the water 50 feet away would be scary as hell, but it wouldn't be harmful.

But it would still be nerve wracking. Picket destroyers in the Okinawa campaign got far more than their share of kamikaze attacks, to the point where one of them put up a big sign that said, "Battleships this way (arrow)".

At Philippine Sea, Spruance put his battleships in front of his carriers, under the dual assumption that Japanese planes wouldn't be able to resist battleships as targets, and the battleships were better able to defend themselves and to survive being hit. But that must have been nerve wracking, too.

7 I am not sure about kamikaze hitting 50 feet off being so benign. They did carry quite a bit of explosives. I never been to war myself, but a friend from Estonia once mentioned that his unit in Afghanistan once requested fire support against a Taliban cell that was forcing them on the ground with machine gun fire. Usually a mortar were sent, but unexpectedly an F-15E came and dropped a 1,000 pound bomb. He said the explosion was the biggest in his life and his own unit almost browned their pants. The distance was about 200 meters or at least 10 times the distance of supposed kamikaze miss.

That's on solid ground, though. A kamikaze hitting the water might not even set off his bomb, and even if he did water won't reflect the blast the way solid ground would.

Maybe 50 feet is too close, but 100 feet would just be a scary experience, not one that spoils your day.

It was supposedly "Carriers this way."

The deployment of Task Force 58 at Philippine Sea was very unusual for the Americans.  However, since one of the carrier task groups were sitting on the front with the Battle Line, and the Japanese had no lack of aircraft attacking the carriers, one wonders about the usefulness of the tactic (Standard practice for the Japanese, but only used by the USN for this battle - the fast battleships were usually better off staying with the carriers.).

Note that Japanese instructions to kamikaze pilots were to avoid destroyers and concentrate on carriers, capital ships, and transports.  Unfortunately for the Japanese, so many of the pilots were extremely green that the temptation to dive on the nearest ship they came across was irresistible - which would have made the decoy carrier idea work out very well.  It made also made life on the radar picket stations hell on earth, but save a lot of hurt for the carriers and transports.

I am pretty sure that if a bomb hit the water at about 180 knots because the kamikaze carrying it is taking a swan dive, it will go off (At that speed, water becomes hard enough to detonate naval shells with working impact fuses - I see no reason why working bomb fuses set to detonate upon impact would not act the same.).

CXT217, think about where the bomb is carried. The entire nose of the plane has to penetrate the water, and produce a splash, before the bomb feels any pressure.

There were kamikaze near-misses, and I think in most cases their bombs didn't go off. (I've seen film, and they just splashed. Check out this film at 0:30.)

Yes, I know there were multiple kamikazes that crashed into the sea without their bombs going off - it is commonly mentioned in US Navy reports from that time.  There is also a very simple explanation for that - standard procedure for most kamikazes was for the pilot to arm the bomb just before they made their attack dive (There was a switch in the cockpit for that.).  Given the low level of training and lack of experience among most kamikaze pilots, failure to arm the bomb would go hand in hand with the tendency to ignore procedure and go for the nearest destroyer.

And yes, there were cases where the kamikaze was sent into the water and the bomb did explode.  Often the result was no damage to the targeted ship, but not always.

12 Could be worse. Just look at histories of the Falklands War - lots of cases where bombs -hit- and failed to go off.

It's quite likely the decoys would have been moderately successful. One of Japan's biggest wartime issues was their poor pilot training program - they simply didn't have the infrastructure in place to replace losses with trained pilots, which is one reason the US's success against the Japanese in the air went way up (of course the other reason is that the US got some good fighters in the air and lots of 'em.) It's very likely that most kamikazes would have been piloted by relatively untrained pilots.

On top of that, Japanese pilots routinely screwed up ID of American vessels, even when they'd been trained properly, and had a habit of reporting big ships when encountering small ones. After the battle of Formosa, the Japanese aviators reported no less than 11 sunk American carriers (actual damage, four cruisers and one carrier, none sunk.) So it's not beyond belief that a Japanese scout could say "hey, I see four flat tops, they must be carriers!" and a major attack would be mounted.

13 I heard a guy (back at Bigweek NNTP forum, IIRC), who parachuted into water for some reason -- a wind, most likely. He was getting ready to release his harness in order not to get entangled and was watching a buoy nearby. Just as he was ready to unbuckle and brace for impact he realized that the blessed buoy was actually a 55 gallon drum and that he's still good 200 feet in the air. That would be a good dive to take.

14 That story is around. When I was in college I dated a woman who was a sky diver, and I heard it then. Only the version I heard was that he thought it was a floating beer can, and it was actually a 55 gallon drum.

15 I've heard Steven's beer-can-vs-oil-drum version, including some broken bones due to the impact.  (A quick googling didn't find the story, though... I don't know if that's a point in favor of it's veracity, or against it.)