Thank You For Your Service Gather 'round my good and dear, for I have a tale to spin for you.  It is a tale of long and unprecedented attention to duty, a saga of unswerving loyalty, a story of honor and faithfulness.  It is the story of a light bulb.

Not just any light bulb, however.  No, it's the story of a compact fluorescent lamp that put any other CFL to shame.  It began its life in the manufactury of Feit Electric, item number BPESL13T/R, a red party bulb.  It sat on the shelf at a Walgreens here in Duckford, waiting to provide service to whomever purchased it.  And waiting.  And waiting.

In October of 2005, I had a Cardiac Incident that sent me to the hospital, wondering if I was going to live or not.  I did, of course, but I did not escape the incident unscathed.  For a long time after, as I lay in bed trying to sleep, I would unintentionally concentrate on my heartbeat, freaking out slightly with every slight unsteadiness.  I began to worry about what would happen if I had to call the EMTs late at night but couldn't get out of bed.  I decided to leave a light on as I slept, but that was a problem.  I don't sleep well when there's light in the room, but it had to be bright enough for someone unfamiliar with the layout of Pond Central to be able to see the way to my bedroom.  Oddly enough, or maybe not so oddly if you know me, it was the US Navy that gave me an idea.

The Combat Information Center on Navy warships are routinely kept dark, with only dim red lights glowing.  The red light protects night vision while providing enough illumination to see what the heck you're doing... exactly what I was looking for.  Now I just needed to find a red light bulb.

The first one I purchased was a regular incandescent bulb, a little too bright, not really red enough for my purposes, and it stank to high heaven.  Undoubtedly the "dip" on the bulb, cooking from the inside out.  Unacceptable.  I searched the usual Home Improvement places, no joy whatsoever.  I knew there were red bulbs out there somewhere, I just had to find them!

And then, one night after work, I stopped into my local Walgreens for... something.  I don't remember what anymore.  But what I actually got was that red CFL from Feit Electric.  I got home, put it in the artsy bakelite-like lamp a cousin gave me for Christmas the year before, and turned it on in the dining room.  Perfect.  Bright, but not so bright that it was going to bother my sleep in the next room over.  The rest of the apartment had a nice reddish glow to it, too.  Couldn't have done it better myself.  Leaving the light on, I moved on to other things.

For nearly ELEVEN YEARS that light was left on.  It was off only if the power went out or when I was vacuuming during the summer; the big fan was using the other outlet at that point, and I'd just unplug the light and plug it back in when I was done with the room.  According to the fact sheet for good ol' BPESL13T/R, it was supposed to have a lifespan of 8000 hours.  It passed that mark during the first year.  After eleven years, it would have been on for right around 96000 hours.  A few years ago, I realized just how incredible the performance of this thing was, and I began to wonder which of us would die first.  Until that time came, I let it do its job.  And it did, hour after hour, day after day, never weakening, never flagging, just illuminating the apartment for my entertainment and safety.

This morning, around 3am, I woke up.  Not entirely however... I was in that nice "mostly awake, partially zonked" state.  Rolling over to check the time, I noticed that it was VERY dark.  Not just in my bedroom, but out in the living room as well... and my brain processed that as "power outage."  Never mind that the fan in my bedroom was howling away at full speed and the alarm clock was glowing redly on my desk, the power must be out.  I fell back to sleep almost immediately.

This morning, I got out of bed, verified the power was not, in fact, out, and realized that the time I had long dreaded had finally come.  The seemingly undying red light, the light that has served me so well for so long, had finally ceased its efforts on my behalf.

Another red CFL has taken its place in the lamp.  But it's not the same.  Nothing will be able to replace that BPESL13T/R.  Thank you for your service, little light.  You will always have a place of honor in my heart, and after I find a suitable ribbon, on my christmas tree.  Thank you.  I was lucky to have you.  Rest now. 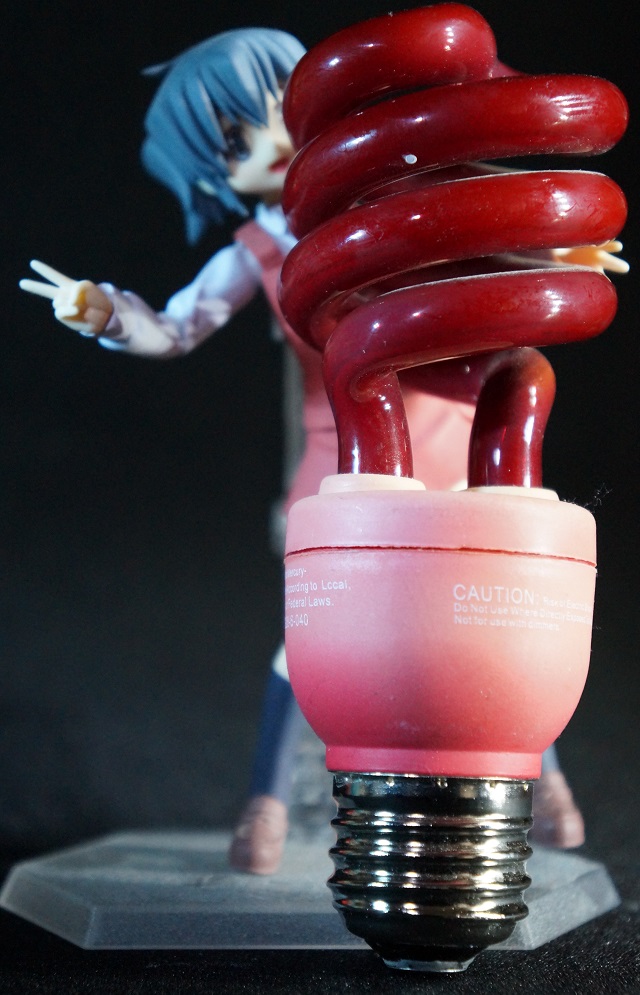 1 Performed its duty well above and beyond stated specifications, indeed.

2 That's amazing! It must have been a really good day in the factory.

3 The lack of power cycling probably had a lot to do with it.

I've had worse luck with CFLs, judging by the pile on my shelf waiting for appropriate mercury hazard disposal. I just with the last few would die already so I can install their LED replacements.

And then I need to figure out what to do with all the 100 watt incandescents I hoarded.

4 The Hero CFL finally bows out.  May flights of angels sing thee to they rest.

I've generally had good luck with CFLs, but not anything near that level.  I don't think we've had a CFL in our house that has been replaced in the past ten months, and some have been burning since we moved here.  Our florescents in the bathrooms however, go out regularly.

5 Mauser: "The lack of power cycling probably had a lot to do with it."

Quite likely.  I'm told that on any kind of tube or lightbulb, the seals take a beating during the resulting thermal cycling.

In a table lamp it was probably also in its optimal orientation for dissipating heat, as well as quite well exposed to the open air.  CFLs in small enclosures or odd positions (if not made for that duty, like the ones made for use in the "can lights" recessed into the ceiling) have a harder life.

Almost always, when I've burned out a CFL, the problem was in the electronics package in the base, not the part that actually fluoresces.  Some of them made a small odor or buzzing noise or appeared overheated (all of which my betters said was not a big deal from a fire safety standpoint but was nonetheless alarming) in their last days.

CFLs are of course a transitional technology, and I  wonder if anybody will be making them in five years, much less ten.  I still occasionally buy some because they're a fully mature technology whose value for the dollar has asymptoted at a very good level, but as LED bulbs become both better (especially at omnidirectional lighting) and cheaper, it is turning into a close race, which LEDs will ultimately win.