Not So Little David 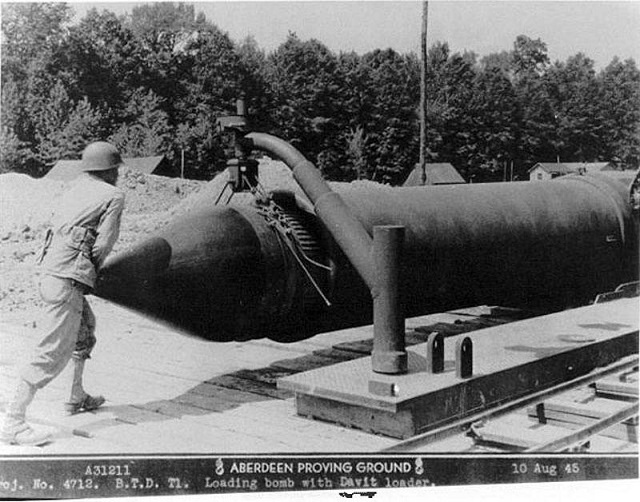 One can't help but think that Morty was... um... overcompensating for something.
One of those things that nobody ever thinks about is bomb aerodynamics.  I mean regular people, that is.  The military, they think about things like that all the time.  After all, when you strap something to the bottom of a wing, it's usually a really good idea to make sure it's not going to have the airflow of an apartment building.  Also, when you drop something from an airplane, it makes it a lot easier to hit what you're aiming at if you know how the thing is going to "fly".  Fall.  Plummet.  You know what I mean. 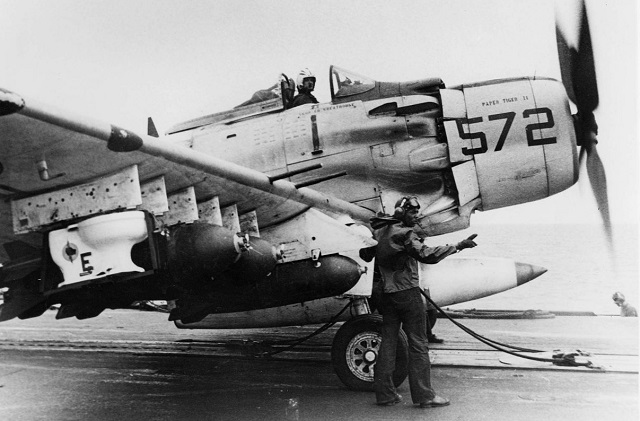 But of course, there's a catch: getting the darn thing into the sky in the first place.  If it's got more drag than RuPaul on Halloween, strapping it to a wing may not be good for the plane or pilot's long-term survival chances.  Putting it in the bomb bay of a larger plane sounds good, until you actually drop it and you haven't the faintest idea what's going to happen next.  If it tumbles instantly upon the application of an airflow, it's a bad idea to find that out at altitude after it rips your tail off. 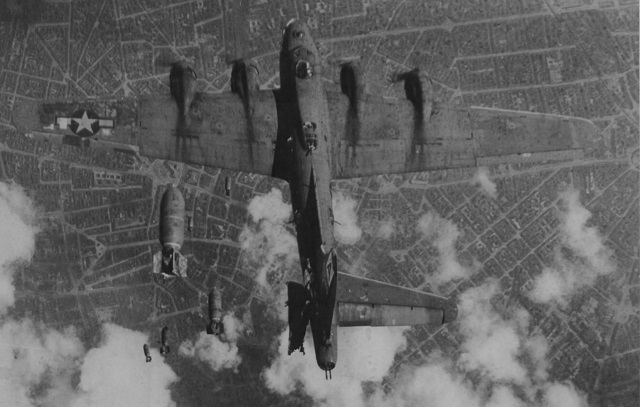 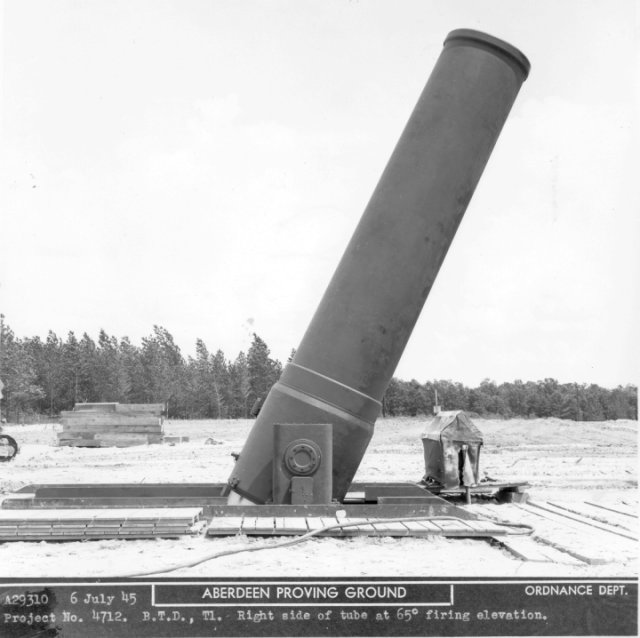 Meet the Little David, a 36" caliber mortar!  Yes, a three FOOT diameter barrel.  You put an aerial bomb into a... kind-of sabot thingy... and voop!  You've got a way to get an aerial bomb into the air without endangering an aircraft.  It didn't have much of a range considering the size involved, less than 10km, and accuracy came down to "over there somewhere", but that's not what the US military was wanting anyway. 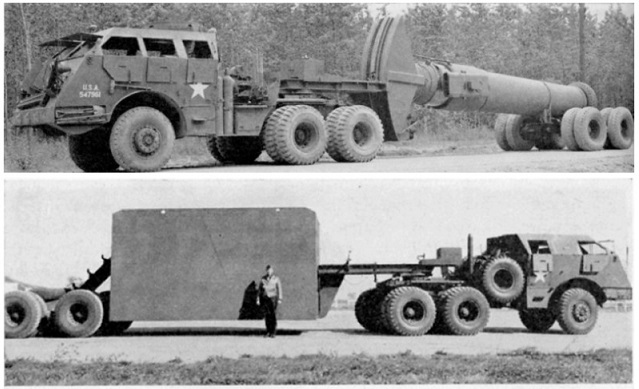 Until people began to realize that that the Japanese were turning the home islands into a fortress, and then they began to look at the Little David as a bunker buster of extreme proportions.  The Powers That Be developed a 36" shell, weighing over 3600 pounds, for the mortar.  Problem was that neither the accuracy nor the range was ever improved, and it was never what you could call "portable."  See that wall the guy is standing in front of?  That's a concrete and steel base that had to be buried for stability purposes that the mortar itself would be placed into... the FORTY TON mortar and the FORTY-SIX TON base. 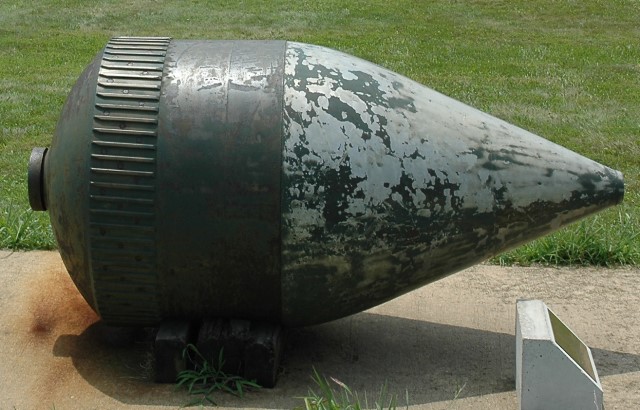 Of course the invasion of Japan never occurred, and people quietly retired Little David as a weapon.  Only one of the six built exists today, and it's on display at the Aberdeen Proving Grounds in Maryland.

1 The sheer scale of that entire enterprise. And all for naught.

2 '36" caliber' are three words that look weird together.

3 I LOL at "over there somewhere".

4 Is there film of one of these being fired? I'd like to see how far the camera jumps.

6 My first thought was "you went to war to gain access to resources.. here, have lots and lots of steel, express delivery."
Watching that video, especially where the crewmen were working in line with the muzzle while ramming in a live charge, then just standing around while the shell slid down the barrel... yikes.  If something went wrong, they'd be finding bits of that crew in the next county.

7 I have two points of interest.

First, when dropping bombs, they can also get caught up in the airflow around the plane, and instead of falling, hug the bottom of the aircraft. This is what is known as a Bad Thing. A friend of mine who was working on early GPS systems told me that the engineers of GPS autopilots didn't quite understand bomb dropping dynamics, not being pilots of having dropped any bombs. The bug he caught probably saved a lot of pilot's lives. The engineers treated the bomb drop like just another waypoint, meaning that a turn could start immediately after. This runs into that whole "Bad thing" thing. you have to continue on for a short time in order for the bomb to clear the wind envelope around the plane.

I thought the SDB was being tested with the rocket motors from MLRS units (Because somehow cluster munitions is eviler than thou.).  Extending the range of regular artillery round has been a slow project over the last few decades, as the Navy discovered when the ERGM project was failed.  I do admit to liking the big 8" howitzers and guns that the Army no longer has.

9 I wonder if that B-17 lost half its horizontal stabilizer to a normally falling bomb from a higher aircraft in the 'box' rather than to one of its own bombs, but indeed, weapons separation is a tricky thing, and a very important one.
Modern fighters, which can carry all sorts of ordnance and (hopefully) launch it at a variety of attitudes, altitudes, speeds, and g vectors, have got to be a worst case.

The A-5 Vigilante, which was supposed to have carried its bombs internally (linked to a couple of auxiliary fuel tanks, also indoors) and sort of pooped them out the back rather than opening bomb-bay doors underneath, presented a different kind of problem.  From what I've read, they never did this with live weapons in operational service,  partly because of reliability; partly, in those pre-JDAM days, because accuracy, which counts for something even with nukes, was... charitably described as modest.

10 Unka Ad, that's exactly what happened to it.  If I remember the story correctly, the dropping plane was out of position, perhaps from damage, perhaps from avoiding another plane.
I just couldn't find a picture of a plane that lost part of its construction to self-dropped ordinance that I liked.  Artistic license and all that.

11 Hard to tell with the resolution of the picture, but the port wing seems to me to be not looking too healthy either.