Name This Mystery Ship XX My internet connection has been gone for most of the past two days, so now that I'm back, it's time for a Mystery Ship in celebration... and it may be a doozy. 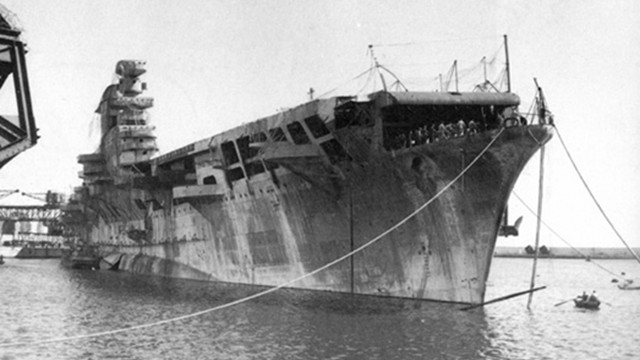 FDM and CXT, don't sprain your hands diving for the keyboard... you two can't play for 24 hours (or 1130pm Central Pond Time on Saturday).  Everybody else, no image searching or the like, one guess per person, have at it!  Winner gets a post of your choice.  Good luck!

1 Wild ass guess: USS Franklin, after it returned from Okinawa. But I'm probably wrong; it would have more apparent damage, and it would have a list.

2 No, I just looked and I'm not even remotely close to being correct. Your ship isn't an Essex.

4 I was close, but not correct. I found out what it really was after I guessed the G.Z..

5 Is that the CV-4 USS Ranger being decommissioned?

8 Muppet's the winner!  The ship is the Regia Marina's Aquila, a mostly-finished-but-never-completed aircraft carrier, converted from a passenger liner.  Near as anybody could tell, it would have been a decent enough carrier with 40-50 fighter/bombers that were actually considered better than the Bf109T the Germans were planning for the Graf Zeppelin.

Looking over all the passenger-liner-conversion-to-carrier proposed or started (I do not think any Navy other than IJN ever finished a conversion.), I amazed at how slow the Junyo and Hiyo were, even in the original civilian incarnation.  I guess that is a result of not having any ships involved in the North Atlantic passenger trade, with a shot at the Blue Riband.

10 I did notice how narrow the flight deck was. I guess that should have cued me to the fact that it was a mutant.

11 Funny, Mauser... BUT USE THE FERSHLUGGNER LINK BUTTON.

I did notice how narrow the flight deck was. I guess that should have cued me to the fact that it was a mutant.

I think that is more a matter of perspective from where the photo was taken.  Most Japanese fleet carriers had narrow flight decks on par with what the Aquila was converted with.  Quite a few carriers in other navies of roughly the same displacement had flight decks of fairly similar width - heck, there were carriers with significantly larger displacements that had decks only slightly wider.

13 It's the nose that confused me with the CV-4 Ranger.

15 Master Duck, just do your stuff.  Any researched artictle from you is excellent.  (Yes, I'm still sort of searching for my old man's LST number....)  My bad.  But you go, bro!