Good Pilots Just Land Planes But the GREAT pilots land them with style! 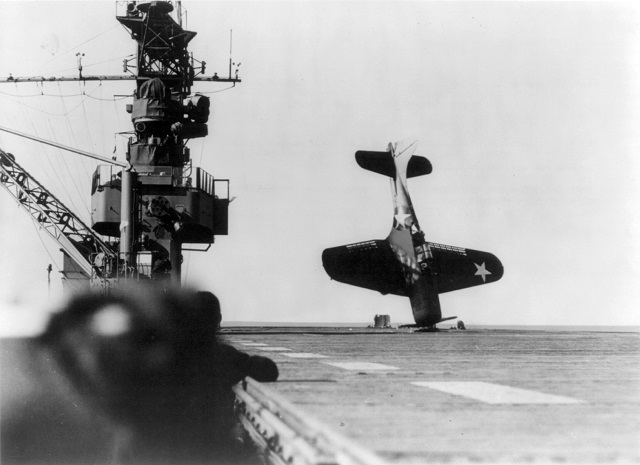 1 I would say "timing!" but the lack of any obvious motion blur, and more than reasonable detail would seem to inform against high-speed film used fortuitously.  And the seeming lack of reaction from what appears to be a crewman casually observing the event.  Which leads me to suspect the near-flat level of the shot, combined with what could actually be pretty extreme perspective from the camera's point-of-view, suggests we're not seeing exactly what appears to be happening.

2 I can't find any detail on this exact image, but from the several similar images I did find, this would appear to be what happens when you snag the arrestor cables incorrectly and stop a bit too abruptly.  The plane normally doesn't stay like that for more than a couple of seconds though.

4 "The plane normally doesn't stay like that for more than a couple of seconds though." I bet they and the few seconds around them are exciting, though!

5 "Any landing you can walk away from, right Hal?"

6 Any landing you can walk away from is a good one.

If they can use the airplane again afterwards, it's a great one.

8 Apparently the Breakdance "Headspin" move has antecedents farther back then we previously knew.