F1 Update!: 2012 Grand Prix of Korea This is going to be a mini-F1U! today, as I'm currently holed up in a lovely hotel in Chicago, and want to relax a bit before the training sessions start on Tuesday.  Besides, the race itself was no great shakes.  So let's get on with it!  THIS is your mF1U! for the 2012 Grand Prix of Korea!

*LIGHTS OUT: There is a 200meter run from the starting line to the first turn at the Korea International Circuit.  That's a very short run in comparison to pretty much every other circuit on the calendar.  Yet that short distance is all it took for the race to end.  Pole-sitter Mark Webber had one of his patented Mark Webber Lousy Starts©, and that's all his teammate Seb Vettel needed.  By the time they entered Turn 1, they were side-by-side, and at Korea, the polesitter is positioned on the outside, meaning that Vettel had the best line.  Though there was a drag race down the long long straight from Turn 2 to 3, the reigning world champion held the lead... and never let it go for the rest of the race.  In fact, he was never even challenged, and only a tire that was on the verge of failing on the last couple of laps kept Sebby from winning by 20 seconds, instead of the 8.2 he led Webber across the line by.

*IN OTHER ACTION: Last week, Gandalf Kobayashi was the toast of Japan for his podium finish at his home race.  That sure didn't last long.  Heading into Turn 3 on the very first lap, he wound up playing pinball, bouncing off first Nico Rosberg, then Jenson Button.  The McLaren's front suspension was snapped like a twig, the Mercedes lasted for another lap before the damage put paid to Rosberg's race.  Gandalf himself lasted for 17 laps before having to give up and park it.

*MEANWHILE: Shiv Hamilton had both a completely miserable day, and what may very well have been the best drive to 10th place ever.  Shortly after his first pitstop, he began to complain about how his car was handling: it wasn't.  The pit box replied that they knew what was going on, and it was a "mechanical balance change."  That's technicalese for a broken roll bar.  A roll bar keeps the car flat in the turns, instead of leaning.  It's also important in keeping the over- or under-steer controlled.  The upshot of this for Hamilton was that his car was safe to drive, but it had roughly a quarter of the grip it would normally have.  This contributed to his tires being shredded much faster than normal and a noted difficulty of keeping it on-circuit.  Which contributed to this spectacle late in the race: 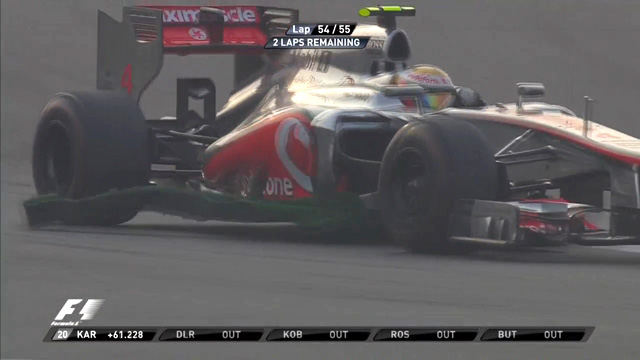 If you're wondering just what that is, it's a piece of astroturf that got peeled up from the run-out of a turn.  Other cars had run over it and torn little pieces up earlier, it's just that Shiv got "lucky" and peeled up a piece that was about six feet long that got caught on some of the bodywork.  In two laps he went from seven seconds ahead of Sergio Perez to less than a half-second.

*DRIVER OF THE RACE:  Vettel had a great race, but we're giving the award to Felipe Massa for the second straight race.  He finished in fourth behind his teammate HWMNBN, but only because Ferrari ordered him to back off.  If they hadn't, he easily would have finished third, and probably would have passed Mark Webber for second.  A month ago, we here at F1U! didn't give a plugged nickle for his chances to be driving for Ferrari next year.  Now we'd be surprised if he isn't driving for them in 2014, too.

*TEAM OF THE RACE:  Red Bull.  Well, their lead driver is now back in the lead of the driver's championship after winning his third race in a row, leading the last 145 laps, and generally looking like he did all last season.  His teammate ain't lookin' too bad, either, and the team is looking like it's a shoe-in for constructor's championship... again.

*MOVE OF THE RACE: Nico Hulkenberg passed both Shiv Hamilton and Lettuce Grosjean at the same time on Lap 40.  To be sure, Shiv was dealing with a car that couldn't corner, and Lettuce was dealing with bad tires and just being generally insane, but it was still a tidy piece of driving for the Force India driver.

*MOOOOOO-OOOOVE OF THE RACE SPORT:  F1 leaving SPEED here in the US for a cable channel that nobody has.  Great, just great.  Hope it was worth it, Bernie.

There won't be any quotes of the race this time around, but thank you for reading this mini-F1U!  We'll be back in two weeks for the Grand Prix of India!  See you then, and here's the newest episode of McLaren's Tooned!

1 As far as I can tell, Speed Channel and NBC Sports Network (formerly Versus, formerly Outdoor Life Network) have about the same subscriber reach, roughly 80 million subscribers each. (Long time viewer of Le Tour de France since the OLN days...)

2 Apparently you missed episode 7 (or I did)

3 Oh look, a Shiv-less "Tooned." Whose picture was under that red cover, mmm?

4 In their brief announcement on the F1 deal, NBC Sports did say that the races will also be streamed on NBC Sports Live Extra (their web, iOS, and Android streaming platform).  So, if you don't get the channel, at least there's that.  No word on commentary team or tape delaying, but they did say that 4 races would be broadcast on network NBC and that all practice and qualifying sessions would be broadcast on cable NBC Sports.

6 I noticed that Hamilton was missing. But Jenson seems surprisingly good-natured in this episode... Unnaturally even.

7 @Kayle, there's one big difference: I get SPEED.  I don't get NBCSN.  Therefore, it's a horrible mistake.

@GD, my assumption is that it's whomever will be replacing Shiv.

@FDM, none of which help me in the least, since you can't record those.  I'm doomed.