F1 Backdate: Mexico 2018 Hello, and welcome to the first ever F1 Backdate!  When I'm running stupidly late on coverage of a F1 race, this is going to be the result:  a look back at the most important aspects of the race with benefit of a week's worth of analysis.  Let's get back(date) to it!
*WHAT HAPPENED:  DH Verstappen and False Esteban! had a coming-together on Lap 44.  FE! was in 16th and a lap down on the Dutchman, who was legitimately leading the race and appeared to be cruising to a victory.  However, the Force India driver had only recently emerged from the pits with a brand-new set of tires, while Verstappen was on fairly used rubber.  Thus, False Esteban! was substantially quicker than the Red Bull as they came down the pit straight.  He managed to get alongside the outside of Red Bull, and held that position through Turn 1.  This put him on the inside for Turn 2, and stayed very close to the curb as the two entered the turn.  Verstappen, on the other hand held the normal line.  The result was predictable: 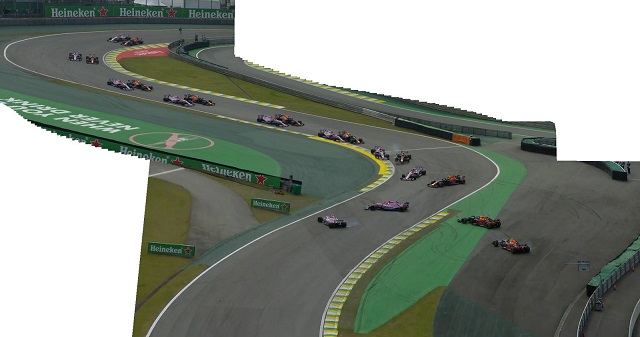 click for larger
Not only did Lewis Hamilton, who was trailing Verstappen by a few seconds, take the lead but Verstappen suffered enough damage that he had no chance at all of catching the Mercedes driver.  He still finished second, but his profanity-laced radio calls showed the level of agitation he was suffering.  On the podium, he looked angry enough to spit teeth.  In the interview room, he called the Force India driver "a p*ssy", while Hamilton and Kimi Raikkonen had to restrain themselves from laughing out loud.  Verstappen would later get into an altercation with False Esteban! that involved shoving and vituperation.  He would be assigned two days of "public service" by the FIA for that.
*ANALYSIS OR SOMETHING LIKE IT:  So who's to blame for this incident that probably cost Verstappen the victory?  False Esteban! was given a 10-second stop/go penalty during the race, very nearly the stiffest the stewards could hand out, just short of an exclusion.  So no matter what the rules say, the Force India driver was at fault.  That being said, the actual sporting regulations are... contradictory... on this matter.
On one hand, a backmarker is 100% allowed to unlap himself from the leader during a race.  Also, in any passing situation the driver in front must leave at least a one-car gap; clearly Verstappen did not do this, closing down on False Esteban! in Turn 2.  By those rules Verstappen was the cause of the collision.  The rules also say that any pass must be accomplished in a safe and controlled manner, and thus False Esteban! should have backed off and waited, probably making the pass down the back straight with DRS assistance.
But there's also the rules of common sense.  Common sense says that False Esteban! was an idiot to challenge the race leader at that time and place... he was in 16th, for heaven's sake.  What was the point?  He was faster, on fresh tires, and could have waited a couple of turns without costing himself anything... and it's not like the Red Bull wouldn't be passing him again once the Force India's tires wet off.  Common sense also says that DH Verstappen shouldn't have put himself into that position.  He had nothing to gain and everything to lose by futzing about with the backmarker, and should have given him plenty of room.  Think of it like False Esteban! was a drunk fratboy staggering around a party throwing punches.  Anybody with a lick of common sense would move back and avoid the punches.  Verstappen just walked into a punch he could have easily avoided.
I'm inclined to declare this a 'racing incident' and let it go.  False Esteban! was an idiot for trying that move when he did and thus costing the Red Bull driver the win.  DH Verstappen was an idiot for not giving the Force India the room it needed, and thus costing himself the win.  I really want to point at Verstappen and say "you're a fool."  The thing is, could he have really expected the Force India driver to be where he was?  A backmarker isn't supposed to push like that... and that's a failing of the "Blue Flag Mentality" that Formula 1 has.  Slower cars are supposed to get out of the way of the leaders after all.  I don't have an answer for any of that. I'm not sure there is an answer without rewriting the rules.  Both drivers legitimately had a right to be where they were when the accident occurred.
The stewards thought Ocon caused an accident, thus was at fault.  I guess that's the answer we have to go with, but it doesn't overly sit well with me.

1 My take is, Ocon was at fault, BUT Hamilton is right - Max should have just let him go. Being right isn't much consolation when you're the one who loses the race lead. And he deserved that win, too. He passed both Ferraris and both Mercedes on track. (Granted, the Ferraris' tires hadn't warmed up yet, Bottas is being...well...Bottas...and Hamilton knows he is not fighting with Verstappen and is therefore giving him tons of room (thus demonstrating to Max exactly what Max should have been doing with Ocon, but somehow I doubt Max got that point...knowing him, he probably did not realize Hamilton deliberately braked way early into Turn One in Mexico because he knew he only needed to finish eighth and he didn't want to risk not finishing at all. One hopes certain four-time champions who really should have learned this lesson by now were also paying attention and taking notes for next year). But still.)

Also, while Max REALLY should not have gone looking for Ocon, at least not until he'd calmed down, I kind of wish he had decked him just for that smarmy look on his face.

2 I'm a Verstappen fan; have been rooting for him for a lot of races now, and at the time I thought "Verstappen, you idiot!" and I stand by it. All things considered he was right, but if he's going to maximize his potential he has to understand he could have avoided that situation without losing ANYTHING.

3 Exactly, and that's what Hamilton told him in the drivers room afterwards. I really hope he thought it over later once he had cooled down and recognized Hamilton was right.

The problem for Verstappen (and Vettel) is that you can score every single point your car can get you and STILL lose to Hamilton in that Mercedes. If either of them wants to beat Hamilton next year, they have to look at how Rosberg did it. He didn't get desperate and take slim chances, nor did he get drawn into battles with cars who were no threat to him. (He also burned himself out beating Hamilton...)

4 BTW, excellent job with the picture. It really tells the story.

5 I can't take credit, Mauser.  I ganked it from a reddit thread somewhere.

6 Upon further review of that picture, I see Ocon's mistake. You're supposed to pass the Dutchie on the *left*-hand side.