F1 Update!: France 2018, The First Person Edition For this I hurried home from work?  THIS?  This is your F1 Update! for the 2018 Ball Of Dreck Grand Prix of France.
*LIGHTS OUT MEANS RACE OVER:  I had hope.  Sure, Lewis Hamilton was on pole and the Mercedes was looking like the mean machine of old.  But his teammate Valterri Bottas was next to him, and his main rival for the driver's championship, Ferrari's Seb Vettel was right behind.  It shouldn't be a runaway I thought.  Either should be able to challenge Hamilton, either at the start or as the race went on... the Merc isn't that much better than the Ferrari, after all.  And then the race began and as they came into Turn 1, Vettel and Bottas got tangled up with each other.  The Ferrari needed a new nose (and was hit with a five second time penalty for causing an accident), the Merc needed... well, it needed the sort of repairs you can do at a six-hour long World Endurance Championship race, but is hard to pull of in a 90-minute F1 race... so he had to do without, and the car was limping all day because of it.
Meanwhile, in a frantic bid to escape the carnage DH Verstappen went running off towards Paris on the huge expanse of runoff area that is Circuit Paul Ricard, only to rejoin in second place.  Now I'm no expert on F1 or anything... I'm just a hyperintelligent duck that can type... but I thought if you gained an advantage by going off-track, you're supposed to return the positions.  Verstappen probably shouldn't have been in second at this point, but hey, what do I know?  Another few turns later saw another schmozzle, this time hilariously between False Esteban! and Pierre Ghastly, two Frenchmen in their home race.  Both were out on the spot, mon dieu, and the dark form of Berndt Maylander was summoned to add to his total of more than 700 Formula 1 laps led.
And thus ended the race.
*OH YOU WANT DETAILS?:  Hamilton nailed the restart and thenceforth was never threatened.  What excitement there was came from Seb Vettel's fight from the rear.  He clawed his way up the field, getting as high as third before his tires began to give up the ghost.  A late pitstop saw him end up in fifth, not horrible, but still surrendering a metric ton of points to his Mercedes rival.
Really, the only question was if Smiley Ricciardio would manage to usurp Kimi Raikkonen for third, while DH Verstappen held in an iron grip.  As has been the norm for quite a few years now, the Ferrari Finn managed to get on the podium... for what turned out to be the 25th time without a victory, a new F1 record.  Which makes one wonder, is he still really good?  Or is he okay, and will never win again?  Place your bets, ladies and gentlemen!
Oh, and Verstappen finished in second.  Yay, I guess.
*FRANCE, WHICH IS FRENCH FOR "BAD F1 TRACKS.":  In the... what, 14 or 15 seasons I've been an "adult" Formula 1 fan (as opposed to those years back in the 70s and early 80s when I'd see the Monaco GP on ABC's Wide World Of Sports a few weeks after it actually happened), they've raced on two circuits in France.  The first was Mangy-Curs, the only circuit that I dislike more than Hungary.  They stopped racing there in 2008, and a better decision has never been made.  And now they've returned to France, with Paul Ricard.  Interestingly enough, Paul Ricard was NOT constructed as a racing circuit, but as a test track.  There's something like 170 different configurations available at the place, and there's even sprinklers built in if you want to test in the wet.  But it's an awful, awful place to race... it's DULL.  AND it's owned by Bernie Ecclestone.
That should tell you everything you need to know about the place.
Next up, we go to the Red Bull Ring in Austria.  I'm not sure why.  See ya then!

1 I was wondering about Max's little excursion myself, but additional replays showed that about 3/4 of the field went off track at some point in Lap 1. (Amusingly, the only person who actually got investigated for it was the only French driver remaining at that point.) My guess is that it was clear that Verstappen (and the others who went off track) was just trying to avoid the carnage, so there was a general...amnesty, I guess...for Lap 1 chaos. Also, it looked to me like he deliberately slowed to drop in behind Hamilton, as opposed to deliberately driving as fast as possible while off-track. So one could argue he gained an advantage over Sainz, but (a) he would have passed Sainz anyway, and he finished well clear of third, so I don't think a penalty for that would have made a difference to the final result, and (b) he did get tire damage doing that, which is why he had to pit earlier than the other drivers - his tires started giving up, and he had to pit while he would still come out ahead of Vettel and before Daniel caught him.

But I was surprised only Grosjean got singled out for going off track. It was quite a few laps later when they announced that investigation, too. Maybe only whichever team suffered from Gro doing that bothered to complain to the stewards, and Renault did not bother to complain about the disadvantage to Sainz, so the stewards didn't choose to investigate? I dunno.

F1 Update!: Canada 2018 A warm, partly cloudy day greeted the F1 Circus as they pulled up to the starting grid on the Ile Notre-Dame's Circuit Gilles Villeneuve.  Ferrari's Seb Vettel was on pole, but the Merc of Valterri Bottas and the surprisingly quick Red Bull of DH Verstappen were clearly about to go hard at him from the start, hoping to steal a march on the red car.  So what happened and how did it happen?  THIS is your F1Update! for the 2018 Grand Prix of Canada!

*THE START WAS INTERESTING: When the red lights extinguished Vettel got away clean, but Bottas had Verstappen all over him for the first few turns.  It took the oomph of the Merc power unit to get the Finn clear, but the Red Bull stuck all over his diffuser.  Until the safety car was called out a few seconds later when Pleasant Stroll got a touch squirrelly and bumped into the Toro Rosso of Brendan Hartley. 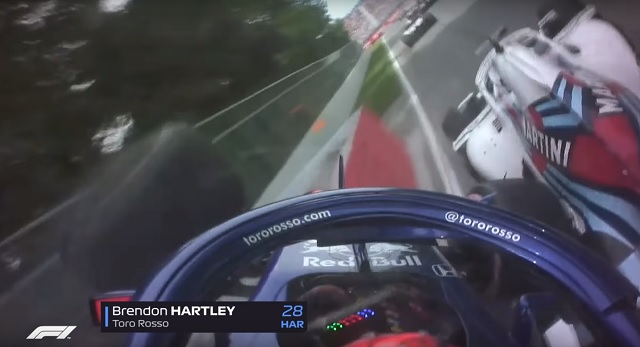 Just for the record, this is not an angle you want to be seeing from this camera.  Unsurprisingly, both cars were out of the race and Berndt Maylander was roused from his ancient slumber to take the safety car for a spin.  He was out for four laps before he was sent back to whence he came.  Seb Vettel handled the restart pretty much flawlessly and the race continued on.
*THE MIDDLE NOT SO MUCH:  Tires.  Everybody was protecting their tires and hoping for another safety car because it's just too damn hard to pass in F1 right now.  You need a massive speed advantage, more than just the DRS, to make a pass and have it work.  So in lieu of that, everybody protects their tires, trying to stretch them as far as possible and hope for a break somewhere.  The drivers hate it, of course, and so do the fans.  This went on for lap after lap after lap, until the race was almost done.
*THE END WAS... INTERESTING: The laps counted down, and Seb Vettel was never challenged.  On Lap 69, he came through the final chicane and onto the pit straight to take the checkered flag.  Which is fine and good, but for one thing: the race is 70 laps long.  As a result of this gaffe, per regulations the standings devolve back two laps, so the 2018 Grand Prix of Canada was actually 68 laps long officially.  Oy.  Vettel led the entire race, and it never looked like he was ever concerned.
*WHAT NEXT?:  What's next is the 2018 24 Hours of LeMans, featuring Fernando Alonso driving for the LMP1 favorite, Toyota.  Gunning for the triple crown (LeMans, Indy 500, Monaco) no doubt.  For the first time ever in the US, the entire race will be shown on ONE channel, Velocity.  Look for it on your satellite feed!  It starts at 9am Central on Saturday.
*NO REALLY... WHAT'S NEXT?:  Still France.  F1 returns to France for the first time since Mangy-Curs went away, heading off to Paul Ricard Circuit.  While it's been a long time, F1 has raced there before and it's often been a testing location as well.  Should be fun, I guess!  See ya then!

1 France is also the start of this season's tripleheader...

What do you think about the Red Bull next-year's-engine situation? I'm beginning to suspect they've already decided to go with Honda and are just deliberately jerking Renault around.

2 My guess, and it's only a guess, is that they'll move to Honda.  There's just too much bad blood between Red Bull and Renault, no matter how friendly they're being right now.
...and if you're smart, you'll put a huge bet on RB staying with Renault right now.

3 That's a helluva freeze-frame. At that precise moment, Mr. Hartley is thinking, "Welp. That's that then."

4 At that stage, it's at least possible he's still rethinking his life's choices and finding religion quickly, but yes, I'd say he was concurrently aware that at least his race was over.

WD, I'm not sure what happened at the end there from your description.  Did the officials wave the checkered flag one lap early?

5 Saw a rumor in motorsport.com comments that it is decided, in favor of Honda, and Red Bull will announce at the Austrian GP. Developing...


Thomas, the celebrity flag waver was told by someone (apparently not race control; it sounds like local officials are delegated to this task) to wave the flag a lap early. So, it's a good thing after all that Max did not pass Bottas at the end (he finished a tenth behind him over 70 laps. I think he was half a second behind on lap 68? Something like that), because his second place would have been stripped, which would be brutal. (As it was, Daniel lost fastest lap to Max, because Daniel set it on lap 69. He was annoyed.)

6 Thank you Mrs. Will, much appreciated.