F1 Update!: Australia 2017 And we're back!  The last race of 2016, Abu Dhabi, feels like it was just a week or two ago and now we're starting up again!  The Mercedes of Lewis Hamilton taken won pole position with his new teammate Valterri Bottas in third.  All was not roses for the silver cars however, as a resugent Ferrari pair sat second and fourth, Seb Vettel ahead of Kimi Raikkonen.  Would Hamilton run away with the season?  Would Vettel have something to say about it?  And Red Bull is always in the mix somewhere.  THIS is your F1Update! for the 2017 Grand Prix of Australia!

*LIGHTS OUT... WAIT, HANG ON... OKAY, LIGHTS OUT!: It all started while the cars made their way to the grid before the start.  Local hero Smiley Ricciardo's Red Bull came to a halt on the side of the track and needed a lift back to the pit lane.  This on the heels of a crash in Q2 that needed a gearbox change.  As it turned out, the team fixed whatever was wrong after the race started and sent Smiley out for a live-action test session... which lasted about 20 laps before a reported fuel cell problem sent him to the garage for good.  Meanwhile, up at the grid things were going equally as well.  As the cars formed up for the start, a marshal activated a yellow light about halfway down the grid.  Meanwhile, the pink Force India of Sergio Perez had stopped in the wrong box and was awkwardly trying to maneuver himself to the right spot.  Race Central saw both of these things happening and said "well, this isn't gonna work... send 'em around again!"  Aborted start.  The second attempt at a start was much more successful, sending the Thundering Herd charging to Turn 1.  Lewis Hamilton beat Seb Vettel in the sprint and settled into the lead.  Uh-oh.

*WAITAMINNIT:  In the past, seeing a Silver Arrow in the lead was sign that the race was pretty much over.  Oh, in the odd race someone could hang on grimly and mount an ill-fated challenge late, but for the most part the ending would be preordained.  But a funny thing happened on the way to the first pit stops: the Ferrari wasn't dropping back.  Vettel sat just about two seconds behind, clearly able to close the gap but unwilling to burn his tires to do so.  Hamilton, on the other hand, was doing exactly that in an attempt to pull away from the Prancing Horse.  After reporting his Ultra-Soft tires were overheating, Mercedes pulled him into the pits on Lap 17, a lap earlier than planned.  Coming back out on Soft tires indicated a one-stop strategy, and he ripped off the fastest lap of the race thus far immediately afterwards, but then found himself trapped in fifth behind the Red Bull of Embryo Verstappen who had absolutely no interest in letting the Silver car by.  Seb Vettel, also on Ultra-Softs, could be expected to pit shortly afterwards.  He didn't.  In fact, he continued to churn out competitive laps until Lap 23 when he finally came in for Softs.  He rejoined the race in third... ahead of Verstappen and Hamilton.  This meant that he was in the lead when the pit stop rotation was over, and it was time for the Silver Arrow to chase for once.

*THE BELLS OF MARANELLO:  As it turned out, the chase was awfully one-sided.  Slowly, very slowly, the Ferrari started to open the gap back to Hamilton.  On Lap 30, Vettel had a six-second lead.  By Lap 40, it was just over seven seconds.  By Lap 50, it was eight seconds.  The Mercedes had no answer for the Ferrari, between raw pace and needing to keep his tires alive for more laps than Vettel.  Behind him, teammate Bottas was comfortably ahead of Raikkonen, with Verstappen a fair piece behind the Ferrari.  The last man on the lead lap was Felipe Not Retired Massa in his Williams... and that only barely, some 1:23 behind (fast lap for the race was 1:26.5).  When the inevitable occurred and Vettel's Red Car swept across the finish line, it was the first victory for Ferrari since Singapore, 2015.  And in Maranello, Italy, home of Ferrari, the churches rang their bells.

*AND THEN...:  As the cars came around on their cool-down lap, the crowd stormed the track.  While nobody was struck, the cars were forced into a very narrow gap by the mass of people just an armreach away.  It appears that there was a communications mistake about when the crowd could be let go.  Lucky there wasn't an incident!  Well, a worse incident anyway.

And so Australia is in the mirrors, Ferrari leads the World Championship... the first time a non-Mercedes team or driver leads the championship since the start of the V6 era... and while it's dumb to try and prognosticate from one race, it's hard not to be at least slightly enthused.  Could we really have a fight on our hands?  The next race is two weeks away in China... we'll find out more then, and we'll see you there! 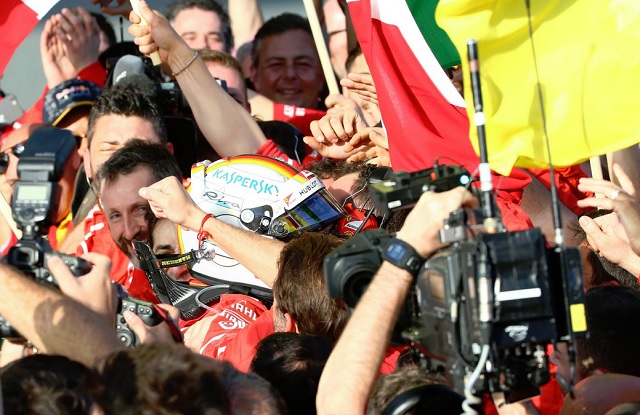 1 I'm happy that Ferrari won.  This is such a weird feeling.

3 Was encouraging that Mercedes couldn't run away with it (or even catch up to it!)

The new cars look great. Thicc! Back ends that would satisfy Sir Mix-a-lot.

The DRS is not the Magic Pass Button that it was in years past; it's still there, but Hamilton not being able to get past Verstappen even when the car had the pace in it could be a bad sign. On the other hand, it's possible that people are just being tentative, not sure about how hard they can push the new rubber; it looks like they're more durable, but we don't know if this means that a car can run right behind another car without burning 'em up (lot of talk about increased turbulence...) So we might be in for a season of fewer passes, but more epic when they do occur? So there's that.