F1 UPDATE!: Abu Dhabi 2009! The final race of the 2009 season has come and gone, but who got the honor of being the first ever winner of the Grand Prix of Abu Dhabi?  THIS is your last F1U! for the year!

*NO SURPRISES:  When you combine what is probably the best car on the grid with one of the best drivers, it's a hard combination to beat.  Unsurprisingly, that combination was Seb Vettel and the Red Bull RB5, and he pretty much had a runaway victory today.  At the start, you knew he had a good chance when Lewis Hamilton's McLaren, beginning the race on pole with less fuel and KERS, just could not pull away.  Lewis' lead topped out at 1.8 seconds after a few laps, then steadily began to decrease.  When Hamilton dove into the pit lane for his first stop, the lead was down to under a second.  When the McLaren withdrew a few laps later with impending brake failure, Vettel's only realistic challenger was his own teammate, Mark Webber, who wound up nearly 18 seconds adrift with Jenson Button crawling all over him.  Pretty much the entire season in a microcosm, right there.

*NOT BAD:  Last night as we watched Quals over at the Old Home Pond, Ph.Duck asked the chief of F1U! if he thought the Yas Marina Circuit was a good track.  At the time, the answer was "It's nice to look at, and probably fun to drive, but we won't know if it's good to race on until tomorrow."  Now, post-race, the answer has to be "Not Bad."  It has its moments, that's for sure, but the race did eventually turn into a processional.  That might have been because the cars are all so close in performance, or the double diffusers ruining the airflow, or maybe just because the track doesn't lend itself to passing, we're not sure.  We lean towards the first two.  We will say that it's the best of the three new tracks we've seen over the past couple of years, and probably the best circuit that Hermann Tilke has designed for F1 (not saying much).

*DRIVER OF THE RACE:  Nope, not Seb Vettel.  Once Lewis Hamilton withdrew, he drove his usual excellent race with no challenges.  No, today we'll give this coveted award to Kamui Kobayashi of Toyota.  In Brazil, the rookie, filling in for the injured Timo Glockenspiel, showed that he wasn't afraid to race with the big boys.  Today, the reigning GP2 Asia champion ran as high as third place while his teammate Jarno Trulli gurned his way around in his usual mediocre style.  Kobayashi finished in sixth, earning his first F1 points in only his second race ever, and made a case for a drive in 2010.  Please note that his countryman, Kazoo Nakajima, scored a total of ZERO points, despite running in every race this season.  Nicely done, Kobayashi, we hope to see you next year!

*MOVE OF THE RACE:  On lap 18, new world champion Jenson Button exited the pits just ahead of Kamui Kobayashi.  The Toyota driver harried the Brawn Champion all the way through the hairpin.  At the beginning of the lonnnnnnng back straight, the rookie stuck himself right under the rear wing of the white car to take advantage of the slipstream.  About 3/4 of the way down, he popped to the outside of Button and pulled alongside as they came to Turn 8.  Button, concentrating on defending his position, held off on his brakes a moment too long and wound up taking a little too much turn.  Kobayashi, apparently expecting this, immediately turned underneath the Brawn and took the position from the champ.  While we understand that Button was heavy on fuel, and the Toyota was running light at this point and therefore had something of a speed advantage, it was still an impressive move for the fearless rookie, and one that's good enough to be a winner of the MotR. 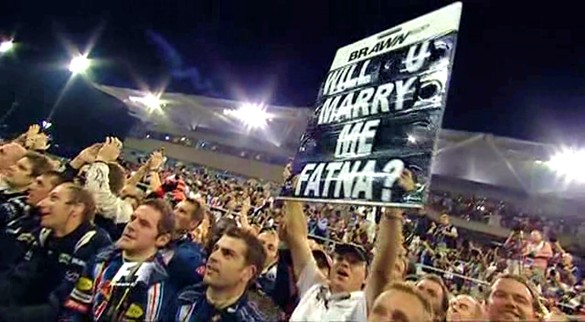 Good luck, mate!  If she says no, however, this'll change to the Moooooo-oove of the Race.
*MOOOOOOOOOOO-OOOVE OF THE RACE:  In our years of watching F1, we at F1U! have never seen this one before.  Lap 22.  Toro Rosso's NKOTT heads into the pit lane and pulls in to get fuel.  The only problem is, he had missed his box and was attempting to stop in the Red Bull pit stall, who's mechanics were waiting for race leader Sebastian Vettel!  Cue frantic scrambling by the crew to either get out of the way of NKOTT or to wave him through.  Fortunately, nobody was hurt in this massive screwup, nor did it affect the leader's race.  NKOTT, on the other hand, ran out of fuel somewhere around Turn 15 on the next lap as he tried to get back to the pits.  In an attempt to be fair to the young'un, he claims that he actually had a gearbox problem and the Toro Rosso pit wall had told him to come in.  When he got there, there was nobody waiting so he assumed that the Red Bull pit crew was actually his.  Uh-huh.  Here's your Mooooooo-ooove, NKOTT.  Hope you didn't take out a long-term lease...

It's nice that Brawn didn't rest on its laurels today. Coming in 3-4 and having Button be on the podium is damned cool, considering that Brawn had already won everything.

2 By the way, was the tunnel any kind of problem? (You were worried about it.)

3 No, but there was one moment where a car fishtailed when it made the turn into the tunnel and my heart skipped a beat.  Metaphorically, not actually.  That's why I take my medications, to keep it from skipping a beat.

4 Just wanted to say that I'm not into racing much, F1 or anything else, but I've read all of your posts this year and enjoyed every one.  Looking forward to reading them again!

Thank you for interesting and well-written blogging!

Stay tuned for a end-of-season F1U! as well; we're not quite done yet.

Awesome coverage of F1 this year -- as always!!! -- and looking forward to your end-of-season wrap up.

Kobayashi is fearless!  Hope he gets a good ride next year.  Maybe Buemi's spot will be open.  Gearbox problem?  As if.

Hard to feel bad for Kimi -- $20 million for NOT driving and still asking $30 million to drive for someone else.