Mini-F1Update!: Austria 2014 Now that our internet connection seems to be stable enough for us to type for more than a few minutes without going away for an hour, and the peanut gallery appears to be getting restless, it's time.  THIS is your mini-F1Update! for the 2014 Grand Prix of Austria!

*THE RACE:  Not as good as we here at F1U! hoped.  It started off better than we could have hoped, with Williams' Felipe Massa holding the lead from pole and his teammate Valterri Bottas holding back a challenge from the Mercedes of Nico Rosberg.  Amazingly, Rosberg's teammate, Lewis Hamilton, who had started in ninth, made his way up to fourth by the end of the first lap.  And that's how it stayed for pretty much the first 15 laps, until the first round of pitstops.  At that point, it became a question of which team had the best strategists.  The answer came almost immediately: Mercedes.  Rosberg pitted first, and when he regained the track his fresh tires allowed him to turn out a lap so blisteringly fast that neither Williams driver could keep him behind.  The same went for Hamilton, and somewhere the Williams pencilpushers were sitting there, wondering what just happened?  While there was little chance that either Williams driver could have won the race, what chance they had was thrown away by the simple decision to keep them out one more lap each.  IF they had pitted first, one of two things would have happened.  First, they could have forced Mercedes to "shadow" the movements of their rivals, forcing them to react instead of dictating the terms.  Or, secondly, the exact same thing that happened to Massa and Bottas could have happened to the Merc guys: fresh tires, a hot lap while the Silver Arrows are standing still, and the lead could have stayed with the guys with the retro-cool livery.  We'll never know, however.  Even with brakes on the verge of failure and overheating engines power units, Rosberg led his teammate across the line, followed by Bottas and Massa.

*OTHER BITS:  Reigning world champion 4Time Vettel suffered a near-total loss of power on the second lap, before whatever problem it was got fixed and he was on his way, a lap down and never in contention.  He'd last until Lap 36, when the team decided to retire the car.  At Red Bull's home track, no less.  The RedBullRing proved to be an interesting place to hold a F1 race, one that was particularly hard on brakes.  It's been since Montreal, maybe five years ago, since we had seen exploding brake discs, but Toro Rosso's Jules Vergne definitely had that happen on Lap 61.  And finally, in the pre-race festivities, every Austrian F1 driver ever got reunited with their old cars to drive a parade lap or two.  Niki Lauda and his Ferrari 312T drew the most attention, of course, but we here at F1U! were wistful at the sight of Patrick Friesacher behind the wheel of the Minardi PS04 once again.  Ah, Guido and Ethel, how we miss you here at F1U!land.

*DRIVER OF THE RACE:  Rosberg, we suppose.  We're not hooked on the idea, though.

*TEAM OF THE RACE: Williams.  It's been a very long time since they've had a weekend like this, and there were surely a lot of people up and down the pitlane happy for Sir Frank Williams.  And rightfully so.

*MOMENT OF THE RACE:  "Let's keep Felipe out for one more lap."

"I've never finished on the podium before.  It's so high up here!" - Valterri Bottas

"To pit first and come out fourth is a bit disappointing." - Felipe Massa (note: real quote)

"Felipe, I am faster than you." - HWMNBN (who was closing on Massa at the end)

That's it for this one.  Next up, Silverstone for the British Grand Prix!  See you then, then!

1 So, question. Vettel has his technical problem, goes down a lap, reboots his car or whatever, starts going again. Rejoins traffic, impeding the heck out of his teammate in the process. But wait a minute, aren't cars not on the lead lap obliged not to impede cars on the lead lap? Vettel could have hung back until the way was clear, made it back up to speed, and started working his way back through the field after that...

What's the rule on that exactly? Nobody really mentioned it at the time (and considering that Vettel put his wing into another car a little later and then gave up in apparent disgust, it hardly mattered), but it's still kind of a jerk move.

It's also kind of a backhanded insult to the backmarker teams, who put in whole seasons without putting a car into the points, when the lead teams drop back a bit and decide to take the car off the track altogether...

2 What's the rule on that exactly?

He should have been blue-flagged, and if he ignored them, be subject to Steward's punishment.  Unfortunately, we in the viewing audience didn't get to see enough of him to find out if that's what was going on.

It's also kind of a backhanded insult to the backmarker teams...

Considering the limited number of engine parts each team gets for the season, I don't think there's any problem with withdrawing a car with known engine problems.  I mean, I see what you're saying, and if Vettel was a lap down just because, say, he spun into the kittylitter and took a minute to dig himself out, THEN they retired the car, I think there'd be some pissed backmarkers...

F1 Update!: Canada 2014 The best day of the weekend greeted the assembled F1 Circus as they took to the grid at Circuit Gilles Villeneuve, Montreal.  This was a mixed blessing: the sun had heated the asphalt to a level where the tires would work beautifully... but it was also hot enough that people were talking about a chance of overheating the tires, too.  But all eyes were turned to the two Silver Arrows poised at the head of the pack.  Mercedes was angling for the first undefeated season, but the two teammates, Nico Rosberg and Lewis Hamilton, had been sniping at each other for weeks.  Everything was shaping up for a great race.  THIS is your F1 Update! for the 2014 Grand Prix of Canada!

*LIGHTS OUT:  Clearly the two Mercedes drivers were completely unconcerned by the 20 cars behind them when the race began.  Hamilton had the better start and was in front of polesitter Rosberg as they headed to Turn 1, but Rosberg had the racing line.  Quite correctly, he made darn sure his teammate respected that fact, leaving him zero room as they went through the turn.  This resulted in Hamilton having to slow down and leave the circuit briefly, allowing Red Bull's Sebastian Vettel to move past into second place.  Surprising, but it was the first turn and Hamilton certainly had the better car.  Then the race changed.

*SAFETY CAR:  Two weeks ago in Monaco, backmarker team Marussia earned their first ever World Championship points.  Whatever the exact opposite of that feeling is, is what they felt at Turn 4 on the first lap today.  Max Chilton, who had finished every one of his 25 races in F1, lost control and collected his Marussia teammate, Jules Bianchi, sending them both into the wall.  The amount of debris left behind had to be seen to be believed, and a Safety Car was immediately summoned.  It took seven laps for the cleanup to be completed and the race to be resumed.

*DOLDRUMS:  The next 30 laps or so seemed to be a replay of pretty much every other race this season.  The two Mercedes pulled away from the rest of the field, opening up an 18 second lead over third place.  By this point, the F1U! team found itself dozing in its comfy chairs and seriously considering turning off the TV and taking full-fledged naps.  Then the race changed.

*BULLETPROOF, NOT HEATPROOF:  Around Lap 40, Lewis Hamilton called in to the pit wall, reporting a loss of power, losing a full second to leader Nico Rosberg in less than a lap.  Shortly thereafter, Rosberg, too, called into the Mercedes pits, reporting a loss of power.  Both cars carry on, but both are visibly slower and losing a second a lap to the rest of the field.  And then something that hadn't happened all season occurred.

*MASSA?  REALLY?:  On Lap 45, Rosberg pitted for new tires and the bad news that there was nothing the team could do about the power loss.  His teammate took over the lead.  The next lap saw Hamilton pit for tires, and return to the track in second place, just ahead of Rosberg, and just behind the Williams of Felipe Massa.  This was the first lap led by someone other than Rosberg or Hamilton all season.

*TIRED.  RETIRED.:  The first sign there was something terribly wrong with Hamilton's car was in the hairpin on Lap 47.  What should have been a relatively easy slow-down-and-turn became a desperate attempt to drag the car through the right-hander while Nico Rosberg went underneath him for second.  On the long back straight with the aid of DRS, he easily repassed Rosberg, but then completely blew the chicane at the end.  He was forced to give the position back to his teammate, at which point there was visible smoke coming from the right side of the car, which slowed to horse-and-buggy pace.  Upon returning to the pits, the car was retired.  The official reason was brake failure caused by an overheating ERS-K unit... clearly the same problem Rosberg had.  All eyes then turned to the remaining Silver Arrow.

*STILL LEADING:  On Lap 40, Nico Rosberg had a 21 second lead over Force India's Sergio Perez in third.  On Lap 50, the lead to Perez, now in second due to the retirement of Hamilton, was 0.9 seconds.  The next two places, Ricciardo and Vettel, were less than a second behind Perez, and Nico Hulkenberg's Force India was a couple seconds behind them.  While Perez tried to figure out how to get past the Mercedes, the rest of the top six close in behind them, everybody dicing for position, looking for any sign of an opening.

*SHAKING FREE:  This situation lasted for some 15 laps, a masterful piece of driving from Rosberg in a less-than-healthy car.  Sergio Perez then suffered a brake casualty, allowing the Red Bull of Daniel Ricciardo to get past and into second.  It took him less than a lap to then pass Rosberg for the lead, for which Rosberg had no answer.  The Red Bull mechanics went wild.

*THE END: And that's effectively how it ended, with Ricciardo leading Rosberg, ahead of Seb Vettel.  At the start of the final lap, Felipe Massa in 5th tried to get past the wounded Perez in 4th.  The two made contact and both went into the wall outside of Turn 1 at high speed (nearly collecting Vettel in the process).  Immediately the race was Safety Car'd, effectively ending the amazing race that started so... um... less-than-interestingly.

*DRIVER OF THE RACE:  You would expect first-time winner Daniel Ricciardo to win this award today.  You would be wrong.  Nico Rosberg wins this for managing to coax an unhealthy Mercedes home in second place, despite a ERS-K system that wasn't working worth a darn and potentially being over a second per lap slower than his rivals.  All of this while his teammate retired almost immediately with the same problem.

*TEAM OF THE RACE:  Red Bull.  Finally, someone took the fight to Mercedes and made it stick.  We just wish it had been any other team.

*MOMENT OF THE RACE:  It's hard not to be happy for Daniel Ricciardo. 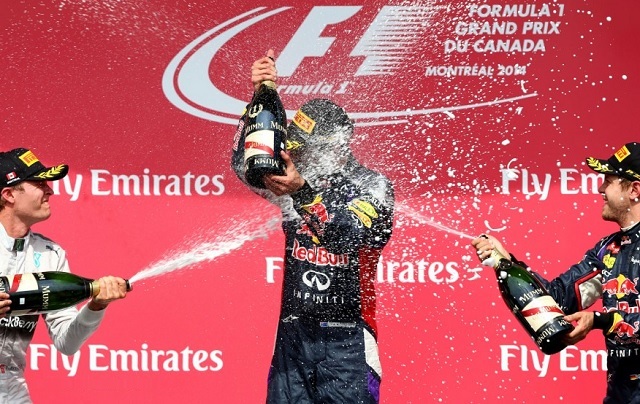 1 All hail the Hulk! He's been in the points every race so far, easily the best Force India has ever done.

2 Interestingly enough, Button overtook HWNBN and Hulk in one move. But he's a modest guy, I can see him saying something like that.