miniF1Update!: China 2016 The sun shone beautifully in the sky as points leader Nico Rosberg brought the Thundering Herd around to the grid at Shanghai International, easily the nicest weather the teams had seen all weekend.  Which is not the unadulterated blessing you may think it is; after all, the cars never ran in sunny conditions in practice, who knows if the teams got their setups right?  Rosberg's main rival, Lewis Hamilton, was starting from last on the grid, deciding not to start from the pit lane.  How would this play out?  And would Ferrari finally make their challenge to the Mercedes domination stick?  THIS is your F1Update! for the 2016 Grand Prix of China!

*LIGHTS OUT:  In Formula 1, you can't always count on a good race, but you can always count on a wild and wooly first lap, and China coughed up a good one today.  Our polesitter had the latest in what's becoming a trend of Mercedes crappy starts, allowing the Red Bull of Smiley Ricciardo to take the lead into Turn 1.  Behind them, all was chaos.  The two Ferraris bounced off each other, aided by the Kid Kvyat's Red Bull making a mad dash up the inside of them.  Kimi Raikkonen went sailing off into the hinterlands as a result, his front wing gone away.  Vettel, on the other hand, continued, but with a damaged front wing that would be replaced at the first pit stop.  Farther back, the Haas of Lettuce Grosjean wound up with nose damage as well.  Even further back... okay, look: we here at F1U! have a belief that if a car that is normally up at the front of the grid is starting from the back for whatever reason, it's better and safer to start them from the pit lane.  That way, they avoid the first corner demolition derby and won't lose too much time in the process.  Lewis Hamilton, however, elected to start from 22nd on the grid, stating that he was going to start passing people at the earliest opportunity and go all-out to catch his teammate.  Instead, he was collected by the Sauber of Felipe Not Massa Nasr, his front wing wound up stuck underneath his Mercedes, and he had to limp around to the pits, the first of an incredible five pitstops on the day for the reigning World Champion.

*AND THEN...: On Lap 3, with DRS enabled, Rosberg swung wide to pass the leader Ricciardo.  As he pulled alongside, the left-rear tire of the Red Bull shredded itself on some carbon fiber debris left behind by one car or another.  He limped back to the pits, but any thoughts of a podium for him were left behind with the tire carcass.  A safety car came out a lap or two later, ostensibly for the clearing of debris (and there was a lot of it around the circuit), but as the Legendary Announce Team put it, it would give the drivers a chance to cool off... we here at F1U! had images of someone pulling out a firehose... and get back to calm and collected racing.  Not that it did much for Seb Vettel's mood: as he dove for the pit lane, he discovered two cars ahead of him, with Nico Hulkenberg's Force India moving slowly in front... certainly to open a gap to his teammate, as the team had decided to "double-stack" them, bringing both cars in at once.  So Vettel, in no mood for such things, passed them in the pit-in.  Not only was it perfectly legal, but Hulkenberg got a five-second time penalty for driving slower than warranted and causing a hazard.  This race had everything!

*WOO.  YAY.  WHEE.:  Until it didn't.  After the restart, which Rosberg handled with aplomb, the race wasn't all that much of a much.  The Mercedes went galloping out over the horizon, barely to be seen again.  At one point in the race, he pitted from the lead... the entire pitstop took just over 24 seconds, including the roll in and the roll out... and still had a 12 second lead when he returned to the track.

*SAILING HOME:  Rosberg made it three-for-three for the season, and six out of the last six, winning by nearly 40 seconds over the second-place Ferrari of Seb Vettel.  Some say that Rosberg is still out on track somewhere, gliding around out of sight of the FOM cameras....  Third and fourth places went to the Red Bulls of Kid Kvyat and Smiley Ricciardo,  45 and 52 seconds behind.  The other Ferrari, that of Kimi Raikkonen was fifth, 65 seconds in arrears.  Lewis Hamilton, who before the race said that he was "perfectly situated" in the championship, finished seventh.  And for the first time, both Haas cars finished the race with Esteban! finishing 14th, Lettuce Grosjean 19th.  No points, but just as important in a way.

"So, how's that championship working out for you, Lewis?  Lewis?  Where are ya, buddy?" - Nico Rosberg

"Yeah, take that Sebby!  That'll teach you to mess with a Russian!" - Kid Kvyat

"It was a horrific race." - Lettuce Grosjean (note: real quote)

In two weeks, we find ourselves in Russia.  Dosvydanya and see ya then!

F1 Update: Bahrain 2016 The desert sun had mostly set on the Sakhir International Circuit as the polesitter Lewis Hamilton led his teammate Nico Rosberg and the rest of the Thundering Herd on the recon lap just before the race start, but all was clearly not right with one of the drivers.  What happened?  Would it affect the second race of the season?  THIS is your F1 Update! for the 2016 Grand Prix of Bahrain!

*KABLAMMO:  As the field made its way to the grid, it became clear that the Ferrari of Seb Vettel was in some distress, judging from the line of sparks it was emitting.  Soon enough, however, those sparks became a mosquito-killing cloud as the engine completely let go.  He pulled off-circuit, day done before he could even turn a lap. 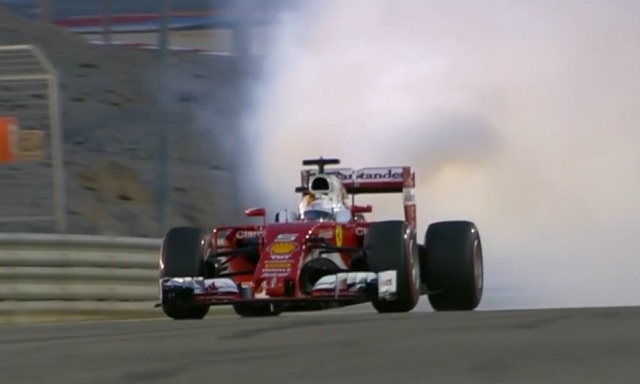 Last week, it was a fiery turbo failure that ended Kimi Raikkonen's race.  Was this a similar failure, or something more?

*LIGHTS OUT:  Like in Australia, Lewis Hamilton had a terrible start, immediately losing the lead to Nico Rosberg ,then getting run over by the Williams of Valterri Bottas in Turn 1.  He'd end up in sixth place by the end of the first lap, and Bottas would be given a drive-through penalty.  As the lap continued, we saw bodywork and pieces of front wing flying off of a plethora of cars as a half-dozen drivers forgot they weren't driving in NASCAR and "rubbin' is racin'" doesn't work in open-wheel.  Within a few more laps, Jenson Button's McLaren had come to a stop on-track and the Haas of Esteban! was retired in the pits with a brake problem.  To say the least, one of the more frantic starts to a race we've seen in a while.

*LONG DAYS AHEAD:  Up at the front, Nico Rosberg's Mercedes was hitting on all cylinders.  By the time all the front runners had made their first stops, he had an 11 second lead over Kimi Raikkonen and 20 seconds on Hamilton, and looked very much like he'd not be headed... either today or for the rest of the season, if things continued on like this.

*AGGRESSIVE:  Meanwhile, Lettuce Grosjean and Haas had decided to throw the normal operating manual in the trash and gamble on tires.  Able to choose what sort of rubber they would start the race on, everybody expected them to go with the long-running medium compound, outlast the other cars, and advance via making few pitstops than everybody else.  Instead, when the lights went out Lettuce was clad in the same super-soft tires as Hamilton, Rosberg, Raikkonen, and the others up front.  More surprising was that Haas kept him on the super-softs after the first stop.  While this did allow him to pass Red Bull's Daniel Ricciardo for fourth place on Lap 25, it didn't seem like the best strategy ever.  Heads must've been shaking up and down the pit lane when Haas pitted a couple of laps later, emerging once again on super-soft rubber.

*MEANWHILE:  Up front, Rosberg had opened his lead to 16 seconds over the Ferrari of Kimi Raikkonen, and nearly 50 seconds over Lewis Hamilton on Lap 30.  While the lead would shrink as the end approached, that was less because Rosberg was being threatened and more because Mercedes told him to reduce stress on his power unit.

*IN THE END:  The last 20-odd laps were actually fairly dull, a startling contrast to the first 30 or so interesting ones.  Rosberg won the race by nearly 11 seconds, with Raikkonen finishing second.  Third went to Hamilton, a half-minute behind his teammate.  That was still a half-minute ahead of the fourth place finisher, Red Bull's Ricciardo.

*IRON HAAS: After three sets of super-softs, Grosjean finished the race on a set of soft tires.  While the fresh rubber let him begin to close in on Ricciardo for fourth, the faster super-softs allowed Embryo Verstappen's Toro Rosso to make a furious charge at the American car.  If the race went 60 laps, he probably would have caught and passed Lettuce... but the race ended after 57.  Once again, the new team on the grid finished way up in the standings, even improving on their debut race... amazing results.

"This is the American Dream." - Lettuce Grosjean (note: real quote)

Two weeks from now, China beckons.  We'll see you then!

Rosberg drove a picture-perfect race, but I do have to wonder whether it would have been so easy if Hamilton hadn't been kicked in the teeth by lady-luck.

Hamilton was complaining about the rear of his car on the radio after the collision. He still was able to do really well, but between the time he lost in the collision and his car not being ideal, it seems like he could have done better.

Of course, lady luck was kicking a lot of people today, most notably Vettel...

2 Hamilton put himself in position to be kicked in the teeth by his second bad start in a row.  While Bottas got the penalty, Hamilton wouldn't have been in that position if he could figure out how to work a clutch paddle correctly.