F1 Update!: Britain 2017 A low, ominous sky squatted just a few miles away from the Silverstone circuit, while directly above was a hardly better overcast, reminding us that rain was an everpresent possibility here in this chunk of Albion.  Would it grace the F1 Circus with its presence, or would the upcoming race be left to its own devices?  THIS is your F1Update! for the 2017 Grand Prix of Britain!
*JUST BEFORE:  We here at F1U! were left with a smile upon our collective faces when the legendary Zsolt Baumgartner was both mentioned by name and seen on our television screen during pre-race coverage.  He's part of "F1 Experience", an expensive way to enjoy a race weekend... but does include a few laps of the circuit in the old Minardi two-seater F1 car, and that has to be driven by someone!  Oh, and on the parade lap, Jolyon Palmer's Renault blew its hydraulics and died on track.  The start of the race was delayed for one lap as a result.
*LIGHTS OUT:  When the race finally began, polesitter Lewis Hamilton made a clean start and led the field into the first turn with no muss, no fuss.  Trailing behind was the Ferrari of Kimi Raikkonen, followed by a dust-up between Seb Vettel's Ferrari and the Red Bull of Embryo Verstappen.  The two exchanged passes before settling down with Verstappen in third.  Vettel was clearly having none of it, and we may have been in line for something spectacular had the two Toro Rosso drivers not decided that their little internecine squabbles were more important than the actual race.  Carlos Sainz and Kid Kyvat did Very Bad Things to each other, with Sainz's car dead, Kvyat limping around to the pit lane, and Herelein Wehrlein, an innocent bystander, damaged as well.  The amount of carbon fiber scattered across the circuit made a Safety Car unavoidable, and Berndt Maylander was awoken from his dark slumber to guide the field for four laps.
*RESTART: ...and this is what's wrong with Formula 1 today.  Asking Lewis Hamilton to lead a flying restart is like giving a velociraptor open access to an old folks' home.  He took control and headed out over the horizon, a grimly determined Raikkonen trailing farther and farther behind.  When the Mercedes driver finally pitted on Lap 26, one lap after the Ferrari, it was no trouble at all for him to rejoin in the lead.
*ALMOST THERE:  As the laps ran down, Mercedes' Valterri Bottas managed to wrest third place from Vettel, and then turned his sights on Raikkonen some five seconds up the road.  Try as he might, however, he could not reel him in enough to legitimately attempt a pass.  And then it happened.  The front left tire on Raikkonen's Ferrari suddenly deflated sending him skittering around the circuit desperately trying to control his car.  It took no time at all for Bottas to move past him for second, followed eventually by Vettel.  Once the Prancing Horse of the Finn had been reshod, he returned to the track with two laps to go in fourth place.  And then Seb Vettel's Ferrari suffered a slightly more violent deflation of his front left tire in almost the same place on track as Raikkonen's.  The Finn was thus promoted back up to third place, while Vettel eventually ended up in seventh.
*OH, HIM?: It may seem like we here at F1U! haven't mentioned what was going on with Hamilton up in the lead of the race.  There's a very good reason for that: we never saw him.  Except during his single pitstop, it seemed like the cameras stayed very far away from the local hero.  To be fair, his was a non-exciting race, alone up front with nothing interesting going on.  In fact, he had himself another Grand Slam: pole, win, led every lap, fast lap of the race.  Not quite as dominant on the timesheet as some of his races the last few years when he'd win by two minutes, and that after stopping for a danish and a cup of coffee... but still and all, unstoppable today.  With the way things wrung out, he now trails Seb Vettel in the championship fight by only one point.
If this seems short to you, that's because it is.  Other than the two Ferrari tire failures, there wasn't much in the way of action after the few few laps... a singularly uninspiring race indeed.  Next time around though... we're in Hungary!  See ya in two weeks!

1 I dunno, I thought Ricciardo's climb from last to fifth (aided at the last moment by Vettel's tire giving up the ghost) was pretty exciting.

2 I thought it inevitable, actually.  That's the problem with having three teams that are so ahead of all the others.  Was it a good drive?  Oh yes, surely!  But there wasn't a car out there that could stop him that wasn't a Mercedes or a Ferrari.

F1 Update!: Austria 2017 There are F1 races that are tightly-fought, tense affairs.  They draw you in, focus your attention, rivet your gaze firmly upon the events transpiring before you.  Where random circumstance changes the entire complexion of the race.  Where an incredible performance makes you acknowledge, once again, that drivers in the Formula 1 world championship are the best in the world at what they do.  As the 20 cars made their way to the starting grid at Spielberg's Red Bull Ring, all and sundry were eagerly anticipating what was to come.  Would the feud brewing between Ferrari's Seb Vettel and Mercedes' Lewis Hamilton come to a head?  How would the tires fare on the abrasive circuit?  Who would blink first?  THIS is your F1Update! for the 2017 Grand Prix of Austria!
*LIGHTS OUT: This was not one of those races that draw you in, focus your attention, rivet your gaze firmly upon the events transpiring before you.  The majority of the action and drama was over by the first turn, beginning with the actions of polesitter Valterri Bottas.  As the race officially began, the Finn's Mercedes had a blinder of a start, looking as if it were shot from a gun.  It was so good in fact that both Seb Vettel and Red Bull's Smiley Ricciardo immediately said to their respective pitwalls that he had jumped the start altogether.  Indeed, replays later showed that he had started moving before the red lights were extinguished.  This alone, however, does not constitute a jumped start!  A driver can begin to move like that legally (it's thought that the car moves because the clutch slipped... or whatever), as long as they're not accelerating within 200 milliseconds of the lights going out, that being the FIA-mandated limit of human reaction time.  Timing and scoring officially has telemetry showing that he had a reaction time of 201 milliseconds.  The race to the first turn was anticlimactic, Bottas getting there with time to spare.
*THE RACE:  The predicted rain never came.  Indeed, the predicted tire wear never came either: Pirelli expected the ultra-softs to last about 18 laps.  Bottas stopped for new shoes on Lap 41.  Felipe Not Retired Massa made it to Lap 47 on his.  So much for tire degradation playing a vital role in the strategies for this race.  Even with Lewis Hamilton's incessant whining that his tires felt awful, his tires weren't gripping, his tires were actually onion bagels with cream cheese and lox, so on and so forth, couldn't disguise the fact that he had moved up to fourth place and (eventually) set fast lap of the race.  What was particularly odd was that everywhere we looked, we saw evidence of the tires suffering wear... more than once we here at F1U! were shocked, shocked we say, at the thick black wear lines appearing on the inside shoulders of whatever rubber a car was clad in.  Yet at no time did anybody suffer any particular indignities from excessive tire wear.  This pretty much guaranteed that we at home could walk down to the local parade and see more action (those shriners with their teeny cars, ha!).  Until something peculiar began to occur.
*"GET YOUR ELBOWS OUT, LAD.":  With four or so laps remaining, suddenly it seemed like everybody trailing someone caught up to them.  Hamilton had run down Ricciardo (which prompted this section's title when the Red Bull pitwall said that to him), Vettel had caught up Bottas, even a sad little struggle for 10th place between Pleasant Stroll, Jolyon Palmer, and Stoffelwaffle.  The last two laps were all frantic to-ing and fro-ing as Hamilton tried to use his superior straight-line speed to mug the Red Bull, and Vettel tried to take advantage of the one sign of tire wear on the day, as Bottas dealt with a blister that did Bad Things to his handling.  In the end, however, both Vettel and Ricciardo kept their respective challengers behind, but it was a near-run thing for both.  Bottas won by 6/10th of a second, and while Smiley was over a second ahead of Hamilton, it was only because Hamilton's final shot took him out of a closer position.  the final two laps gave the race the illusion of having been action-packed, when in fact it was nothing of the sort.
*HOW ABOUT A THREESOME?:  With Bottas winning his second race on the year, he moves into third place in the driver's championship, with 136 points.  Ahead of him is his teammate with 151 and Seb Vettel sits atop the leaderboard with 171 points.  We might seriously have three contenders for the championship... if Mercedes lets their men race.  We shall see in just a few days, as the next race is this Sunday at the so-called Home of F1: Silverstone!  We'll see ya there!

2017 Austria F1U! Delayed As I woke up from a nap a short while ago, I came to a remarkable conclusion: I don't wanna do this tonight.  So instead of doing a worse job than I usually do, I'm not going to do it at all tonight.  Instead, I'm just gonna play one of the half-dozen games I picked up in the Steam Summer Sale, then go back to bed. 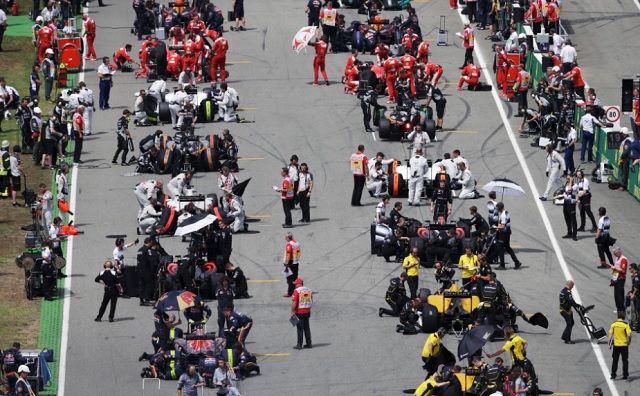 The F1U! will be tomorrow night instead.