F1 Update: Bahrain 2015 Back again for the second night race at Sakhir, the assembled F1 Horde sat burbling quietly under the lights.  Would the Mercedes massacre?  Would Ferrari fight fiercely?  Would Williams win?  THIS is your F1 Update for the 2015 Grand Prix of Bahrain!

The beginning of a race is signaled by the sequential lighting and mass extinguishing of five red lights.  The way these work is interesting, to a certain extent.  Once the field has taken to the grid, Charlie Whiting, technical overseer for Formula 1, presses a button on his control panel that begins a random countdown.  When the countdown reaches zero, the set process begins.  Today, there was a remarkably long stretch of time between the cars hitting the grid and the lights coming on.  Part of that was due to Pastor Maldonado taking the wrong place on the grid for reasons not worth getting into and easily capsulized by rolling your eyes and saying "Maldonado" in a disgusted tone.  But part of it had to be the timer taking longer than we can remember.  This is somewhat more important than you might at first think... F1 cars are cooled by airflow over relatively small radiators.  Thus, if they aren't moving, they aren't being cooled... and the cars had been still for a very long time indeed.  Much to our surprise here at F1U! HQ, everybody on the grid got away clean... Felipe Massa started from the pitlane due to a problem getting started on the grid, and Jenson Button's power unit woes continued, the team giving up on getting him into the race.  Meanwhile, both Manor cars took the start.  Just sayin'.

Thus the race started, and noticed was served quickly that Ferrari were not messing around.  The two Red cars, starting second and fourth on the grid, actually seemed to team up as they headed into the first turn.  In doing so, they positioned themselves so that the Mercedes of third-place-sitting Nico Rosberg had two choices to make: either back off the throttle and surrender the place to hard-charging Kimi Raikkonen, or bury his Silver Arrow deep in the bowels of one of the Prancing Horses.  Wisely, he backed down, but the tone for the race had been set.  A dogfight was in the offing!

And then a lack of refreshing sleep caught up with the members of the F1U! staff.  This is not an uncommon problem when the weather begins to change around Duckford.  It was right around the time of the first pit stops, with Hamilton leading Rosberg and Vettel leading Raikkonen, that the whole of the F1U! horde found itself in that state of not-quite-asleep, eyes closed, brain right on the edge of pulling up a pillow and shutting down.  The first time we watched the race, we stayed that way until the winner's anthems were played.  The second time, we picked up from where we remember leaving off.

And promptly went under again.  This time though, the F1U! staff managed to pull ourselves out of the blissful arms of Morpheus (the Greek god, not the Matrix character) after roughly 20 laps, just in time to see the second round of pitstops.  In the rotation, Hamilton still led, but Vettel's Ferrari jumped Rosberg's Mercedes for second.

This situation only lasted for a few laps.  Vettel, finding himself under all sorts of pressure from Rosberg, went wide out of a fast turn and badly damaged his front wing, either on a rumblestrip or from just barely getting into a sandtrap at high speed.  Either way, the Ferrari had to come in for an unscheduled third stop, letting Raikkonen into third... well, not really.  In truth, Raikkonen was in the lead at this point, but only because he had yet to stop for tires.  He did not stop until ten laps after everybody else, emerging on fresh Option tires in third place.

While much faster than either Mercedes at this point because of the tires, Raikkonen was 24 seconds in arrears to Hamilton, and 19 to Rosberg.  By Lap 50, the gap to Rosberg was 10 seconds and dropping by over a second per lap.  By Lap 55, Rosberg had mirrors full of Red car, and it looked like we were going to have an exciting fight for second.  And then both Mercedes drivers reported problems with their rear "brake-by-wire" systems.  Rosberg's glitch occurred just as a turn approached, and he had to run very wide, letting the Finn past with no fight at all.  The question then became "could he catch Hamilton in the few remaining laps?"

Alas, the answer was "nope."  He did cut the lead to only a few seconds while Hamilton wallowed around the track with recalcitrant braking, but it wasn't enough.  Lewis Hamilton led Raikkonen, Rosberg, the Williams of Valterri Bottas who was some 45 seconds back, and Vettel who probably would have passed Bottas in another lap, across the line for his third win of the season in what turned out to be a pretty interesting race.

It's clear that Ferrari may not be able to match the overall pace of the Silver Arrows.  However, it's also clear that it's a lot closer than anybody expected, and while I'm not positive about this, it seems like when the cars are on the softer, less durable tires, the Red cars are quicker.  It's not enough to make up the overall gap between the two marques, but it does make it a lot closer.

The next race will be Spain on May 8th, as the European leg of the season begins.  At that point, we'll have a whole new championship as that's traditionally when the upgrades start to get applied to the cars.  Might make for some extra excitement!  We'll see you there and then.

1 Neat! I hope this is a sign that there will be some exciting races (in a non-wreck way)  this year!

What do you think about the Cubs guy throwing his glove? I thought that was classic!

F1 Update: China 2015 Right, so, much to my surprise, I stayed up to watch the race last night.  This morning?  It started at 1am, so you make the call.  Anyway, I had no plans to do so, but an overly-long nap after a day of intestinal distress found me wide awake when the lights went out.  So what happened?  THIS is your F1 Update! for the 2015 Grand Prix of China!

Weather was no issue when the lights went out and the Thundering Herd piled into Turn 1.  It took very little time at all for the front of the field to settle down to Hamilton-Rosberg-Vettel-Raikkonen-Bottas-Massa... or Merc-Ferrari-Williams, if you prefer.  Prior experience would have us see that and think "Silver Arrows galloping over the horizon."  But!  This is no longer 2014, my friends... it's 2015, a new era in Formula 1!  Things have changed!  And by that, I mean that Mercedes didn't gallop over the horizon... at least, not alone.  Ferrari tagged along, staying close enough that Hamilton and Rosberg could clearly see red in their rear-view mirrors.  By Lap 10, a mere six seconds separated the leader from Raikkonen in fourth.  It looked like Ferrari's plans to make their tires run longer than the Mercs were working... and if they could stay in touch with the Silver cars, they would actually have the advantage.

Which is why it came as such a shock when Seb Vettel brough his Ferrari in on Lap 13, before either driver for the German team even discussed stopping.  After all the drivers made their stops, the standings were exactly the same as they had been: Hamilton-Rosberg-Vettel-Raikkonen, with seven seconds covering the four.  On one hand, Ferrari had to be ecstatic: they were actually racing with the dominating Mercedes.  On the other hand, they had to be disconsolate: their strategy of out-lasting the Mercedes on tires had clearly been launched out the window.  Still, it could be worse; they were still in contact with last year's champs, and it was pretty clear they would be able to stay right there.

So far this season, Nico Rosberg and Lewis Hamilton had seemingly called a truce after last year's nigh-on open warfare.  These days, both drivers were saying all the right things and appearing to mean it.  Sure, Rosberg did say that he wasn't the team's second driver, but you'd want him to say that.  On Lap 20 however, we heard a call to the pit wall from the German wunderkind: "Lewis is driving really slowly, get him to speed up."  After the race, he go even farther, accusing Hamilton of intentionally sabotaging his race by driving just slowly enough to force him into his dirty air.  This would cause his tires to wear more, due to decreased aero grip.  This had the effect of letting Vettel close up, ohbytheway.  The after-race interview was... um... heated. 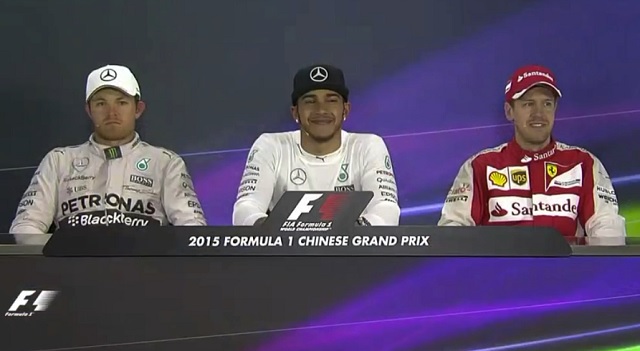 Anyway, everybody stayed close (at least in F1 terms, anyway) until the second round of pitstops occurred in the early Lap 30s.  By the time it was all over and done with, Hamilton had a six second lead over his teammate, who was four seconds up on Vettel, who had a similar gap to his teammate.  The Williams were at least on the same lap, some 50 seconds back, but there's clearly Big Two and an Everybody Else now.

Now that the leading four were on the harder Prime tires, the race went straight to hell with 20 seconds covering them.  Unfortunately, they weren't evenly spaced: the two Mercs were a couple of seconds apart, then there was a 12 second gap back to Vettel, who was slowly losing time to his Finnish comrade.  Indeed, on Lap 50 it looked for all the world that we were going to see an exciting fight between the Red cars for the final podium position.

Until 17-year-old Max Verstappen's Toro Rosso had A Bad Thing happen to the rear of his car just over the start/finish line on Lap 53.  With his rear tires locked solid and a lump sounding less like an engine and more like the sound pudding would make if it were dropped down a flight of stairs... and made of metal... he tried to pull off the track, but couldn't manage the feat.  Not his fault, this fell into the category of "comprehensive and total failure."

Unfortunately, it occurred on the front straight, where it would be singularly unsafe to try and send marshals out to recover the car unprotected.  It would have been even more unsafe to leave the car where it was, so Berndt Maylander was duly summoned to the track for Safety Car duties.  And that's how the race ended, under the watchful eye of The Powers That Be.  Hamilton led Rosberg, Vettel, a slightly disgruntled Raikkonen who later said that he believed he could have taken Vettel, followed by the Williams of Massa and Bottas.  Both McLarens finished the race (12th and 13th) as did both Manors (15th and 16th).

A race that was right on the edge of being really exciting... coulda been.

Next weekend, we'll be in Bahrain, where it's going to be hot again... look for Ferrari to make a comeback.  See ya there!