F1 Update!: Belgium 2016 A surprisingly pretty day greeted the F1 Circus as they took their spots on the starting grid.  It was more than 15Â°F cooler than it had been all weekend, giving hope that the supersoft tires could last longer than a lap, and that the softs wouldn't develop the spontaneous blisters that'd been forming during the practice sessions.  Polesitter Nico Rosberg had to feel confident that he'd rack up a huge score and close the gap to his rival and teammate Lewis Hamilton, starting last on the grid.  But would the two Ferraris on the second row be able to threaten the Mercedes driver, or could wunderkind Embryo Verstappen, sitting alongside Rosberg, score a surprise?  THIS is your F1Update! for the 2016 Grand Prix of Belgium!

*LIGHTS OUT:  As the race began, Rosberg made a good start and was clear of his challengers as the Thundering Herd charged into Turn 1, the La Source hairpin.  The same could not be said of the Red Bull of Verstappen, victim of a less-than-swell start.  He was swallowed up by the twin Ferraris of Seb Vettel and Kimi Raikkonen.  With the blinding optimism of youth on his side, the 18-year-old Dutch driver decided to try and win the race in the first turn.  Raikkonen was on the inside of Vettel at the apex of La Source, and Verstappen tried to fit himself into the gap between the Finn and the inside barrier.  The resulting kerfluffle saw Vettel sideways in the path of traffic, Raikkonen with damage, and Verstappen needing a new nose.  Bodywork continued to fly from incidental contact throughout the field going into Eau Rouge, with a huge amount of sparks coming from underneath Raikkonen's car from a tire going down.  At the top of the hill,  Jenson Button saw his suspension turned into flinders when rammed from behind by the Manor of Pascal's Wager.  That mostly ended the first lap shenanigans, unless you count Kimi's pitstop where the undertray of the Ferrari caught fire from dragging around the track.

*SAFETY CAR OR RED FLAG?  WHY NOT BOTH!:  The next lap saw Carlos Sainz suffer a puncture and subsequent failure of his right-rear tire.  Unfortunately for his Toro Rosso, the carcass of the tire did not come free.  Instead, it sort of peeled back while part of it stayed attached to the shoulder of the tire.  It immediately began flailing away at the rear bodywork and wing, first bending, then snapping, the wing's upright. 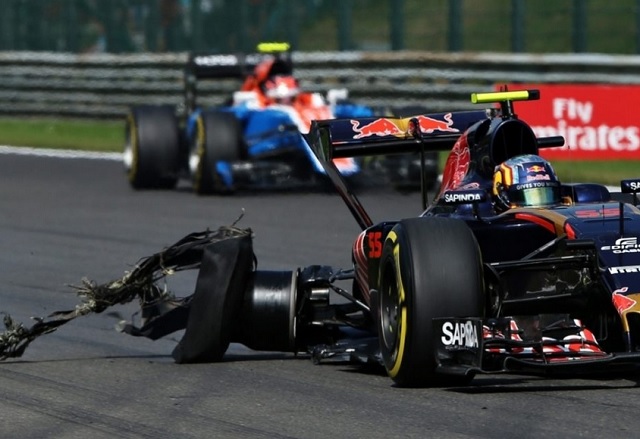 Fortunately for him, the tire blew just after he got through Eau Rouge, otherwise the resulting wreck could have been calamitous.  The same luck could not be applied to the Renault of Kevin Magnussen.  He got a little sideways at the top of the hill and wound up going into the barriers at high speed backwards, ending up nose-first in a tire barrier. 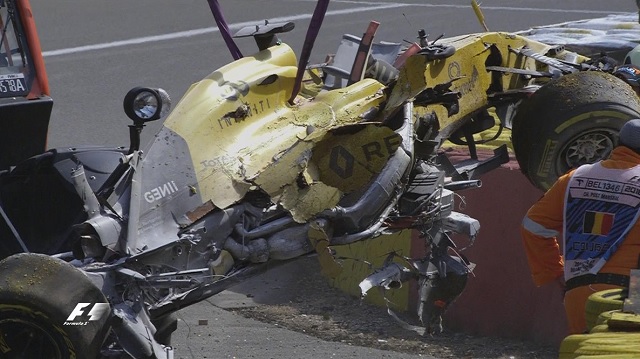 The Renault was comprehensively destroyed.  The chassis actually twisted along the length of the car, popping the removable cockpit bolster free.  A testament to the safety of a F1 car, Magnussen extracted himself from the remains quickly, showing only a small limp.  After a visit to the track's medical center, he was taken to a nearby hospital for observation and treatment of a cut on his ankle.  To allow the track workers to remove the remains of the car, a Safety Car was summoned.  Much of the field took this opportunity to change tires, getting off the destructing supersofts.  There were, however, a few drivers that stayed out.  Notable among them was the McLaren of Fernando Alonso and the Mercedes of Lewis Hamilton.  These two drivers, with five world championships between them, had formed the final row of the grid due to engine penalties.  They now found themselves fourth and fifth, behind only Rosberg, Red Bull's Smiley Ricciardo, and the Force India of Nico Hulkenberg.  After a lap or two behind the safety car, the race was red flagged; Magnussen's impact had damaged the tire barrier to the point that an extensive repair was required.  This stoppage of the race allowed the five drivers that hadn't stopped to change tires essentially for free.

*RESTART TO THE END: The red flag period lasted for 20 minutes, and the free tire change proved to be a godsend for all five drivers.  After Hamilton managed to pass both Alonso and Hulkenberg, within eight laps of the restart, the race settled down into just ticking off the laps.  Ricciardo couldn't close on Rosberg, but neither could Hamilton run down the Red Bull.  Behind them, the Ferraris struggled to regain positions lost during their accident and repair, with Vettel finishing in sixth.  With the third "power team" out of the running, Force India, which has always had good results in Belgium, was able to pull themselves into fourth and fifth.  This unexpected but welcome development pulled them up into fourth in the Constructor's championship, ahead of Williams but behind Ferrari.  So the final result saw Rosberg winning, with Ricciardo, Hamilton, Nico Hulkenberg, Sergio Perez, Vettel, and Alonso rounding out the top seven.

*THOUGHTS:  A great track with a promising starting grid should have led to a fun race.  Instead, we actually ended up with a dull tilt, the only excitement coming in the first few laps from the contact and accidents.  This is not why we watch here at F1Update!, either the accidents or seeing the result preordained by the red flag.  Pity.

Next weekend we get the fastest track of the season: Monza and the Grand Prix of Italy.  See you there.

When I saw that Hamilton came in third, I was expecting a great writeup of a great race.

Well, the writeup was great but it's a pity the race wasn't. I was hoping to read about Hamilton's great quest to pass car after car after car, and it didn't happen that way. Oh, well.

2 That pic of Sainz's ride in the process of rapid self-disassembly is nearly as scary as the pic of Magnussen's wreck. Hooboy.