F1 Update!: Japan 2017 The nicest day of the weekend greeted the Herd as they made their way up to the grid.  Unlike Friday Practice, which had buckets o' rain coming down when it wasn't falling in sheets, or Saturday Quals, which was gray and dreary, the sky was blue and the sun was bright as racetime approached.  Lewis Hamilton sat on pole... again... with a new track record... again... and looked ready to win... again.  Normally having your rival next to you on the grid isn't the most comfortable feeling.  The Ferrari of Seb Vettel sat in the second spot, but his team had removed the engine cover on his car with just minutes to go and were working feverishly.  They got him buttoned up in time, but the German couldn't have been happy.  So how did all that work out?  THIS is your F1Update! for the 2017 Grand Prix of Japan!
*LIGHTS OUT:  Hamilton didn't have the best of starts once the race finally began, but that turned out not to be a big deal because none of the cars around him did either.  Behind him, last week's race winner, Embryo Verstappen, got past Vettel's Ferrari in a slick little move at just about the same time that Carlos Sainz, in his last race with Toro Rosso before he moves to Renault, buried himself in the tire barriers sideways.  The accident was stiff and the car was out of the race, but because of its location the marshals had to bring out heavy machinery to carry it off.  We here at F1U! would be lying if we said that we didn't have flashbacks to the tragic 2015 Grand Prix of Japan at this moment.  Fortunately for everybody's sanity, a Safety Car was immediately summoned as Lap 2 began.
*HELLO DARKNESS MY OLD FRIEND:  It became obvious that whatever it was that Ferrari had been working on in Vettel's engine before the race, they hadn't gotten it repaired.  Once the race restarted, he was almost instantly swarmed over by three cars.  The Ferrari was clearly down on power... we later found out he was over 20mph in the hole... and the team soon told him to return to the pits and retire the car.  The culprit that crippled this high-tech marvel, this paragon of racing?  A spark plug.  We can only assume it had only been made with a core of Californium, instead of the usual metal smelted from asteroids.  In the garage, Vettel clearly realized that any chance he had of winning the driver's championship was realistically gone.
*THE REST:  Hamilton opened his lead over Verstappen's Red Bull to around five seconds or so, but couldn't quite get away from the Dutchman.  Every time he would look to be pulling away, someone else would wreck and a Virtual Safety Car would be called out.  The last one, called out when Pleasant Stroll had a wheel rim failure, let Verstappen be in position to narrow things down to less than a second after the restart.
*CLOSE, BUT NO CIGAR: For a couple of laps right at the end, it looked like we actually had a race on our hands.  Verstappen actually appeared to be faster over the entire lap, but getting past another car on the fairly narrow Suzuka circuit is difficult at the best of times.  When your target is Lewis Hamilton and his closest rival is in the pits?   Unlikely, to say the least.  Throw in hitting traffic at just the wrong time, and Verstappen never had a chance.  He'd follow Hamilton home in second place, just over a second behind.  It was an easy drive for the Mercedes driver, but he had to drive a clean race... one mistake and the Red Bull would have been past him.  That mistake never occurred.  The other Red Bull of Smiley Ricciardo finished third, almost 10 seconds back.
Not the best race of the season.  In fact, I'd go so far as to call it dull, the final few laps notwithstanding.  It is probably going to be the most important race of the year though, as Hamilton now has a 54 point lead over Vettel with four races to go.  Indeed, if he wins the next race and Vettel finishes sixth or below, the championship ends right there.
And that next race?  We return to Austin Texas for the US Grand Prix in two weeks!  See ya then! 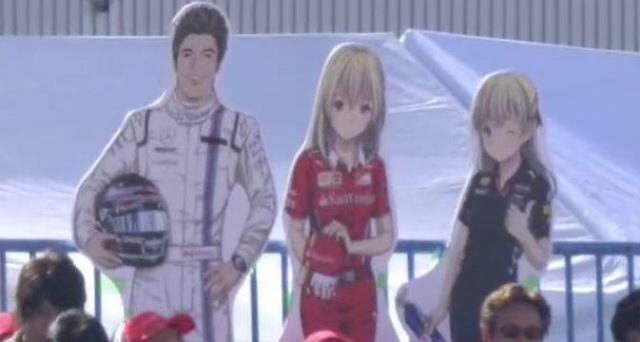 1 Christian Horner said he thought Max could have passed Hamilton if not for the traffic, but Max said he didn't think he could have passed him because the Merc was faster in clear air. Max did do a good job staying on him, though. Bottas also made things interesting for Ricciardo, but the virtual safety car saved him.
I liked Magnussen's huge pass on...was it Massa? that actually allowed Grosjean to pass him as well. Second double points for Haas!
And yes, you could definitely tell Vettel was madder than hell. Probably a wise choice on his part to take the fine rather than talk to the press.

2 You know, in The Wacky Races, everybody got a chance to win (Even Dick Dastardly actually won once.)