F1 Update!: Bahrain 2013 Remember when you could watch a Formula 1 race and expect that Hannibal Vettel was going to win?  It was only two seasons ago that he dominated the sport, so we're not talking that much time.  Remember how much fun that year was?  You do?  Good.  THIS is your F1 Update! for the 2013 Grand Prix of Bahrain!

*BACK IN THE BAD OLD DAYS:  It took two laps, but Red Bull's Hannibal Vettel passed the Mercedes of polesitter Nico Rosberg for the lead.  He then proceeded to run away and hide.  The only car that seemed to have the guts to hang with him, the Ferrari of HWMNBN, managed to stay in contact for eight laps.  At that point, his DRS flap stuck in the open position, requiring two unscheduled stops to close permanently and the last possible challenger was gone.  Vettel ran away with the race.

*OH SO CLOSE: For most of the race, Force India's Paul di Resta had a podium position.  For a few laps, in fact, he led the race while Vettel pitted.  Eventually the Lotus of Kimi Raikkonen passed him for second.  Then, alas, with five laps remaining, Lettuce Grosjean's newer tires took him past for third.  It would have been Force India's second ever podium, and di Resta's best finish ever.

*THE REST:  Meh.  Sergio Perez apparently thought that Red Bull thing of a few weeks ago was cool, so he decided to run into his teammate, Jenson Button.  Felipe Massa had two right-rear tire failures to kill any chance he had.  We here at F1U! just couldn't be bothered, to be honest.

*DRIVER OF THE RACE:  HWMNBN.  His DRS system stuck open twice in two laps.  It looked like it would open, then for whatever reason, it would get caught in the airflow and open wider than it was supposed to.  After it happened the second time, Ferrari told him "don't use it anymore." Racing from last, he managed to drive a crippled car back up the grid to finish eighth.  Amazing job.  Honorable mention to Paul di Resta for a heckuva weekend.

*TEAM OF THE RACE:  Lotus.  Kimi in second, Lettuce in third, and the team is now second in the Constructors Championship.  Yeah, not bad.

*MOVE OF THE RACE:  On Lap 20, Lettuce Grosjean passed Nico Rosberg for third.  To do so, he took advantage of McLaren's Jenson Button having passed Rosberg mere moments earlier, as Rosberg was out of position.  It was a slick move, but completely unphotogenic.  Still, here's your award, Lettuce!  Nice job!

*MOOOOOOO-OOOVE OF THE RACE:  Oddly enough, the only Moooooo-ooove-worthy thing that occurred today was on Lap 1, which means it isn't eligible to win the award.  It also wasn't on camera, so Giedo Van De Garde gets away with it.  Barely.  We've got our eyes on him, though.  So this week's award goes to Pirelli for Felipe Massa's right-rear tire failures.  They claim it was due to debris, but there were no other failures all day.  Methinks Pirelli just had some bad rubber in the mix. 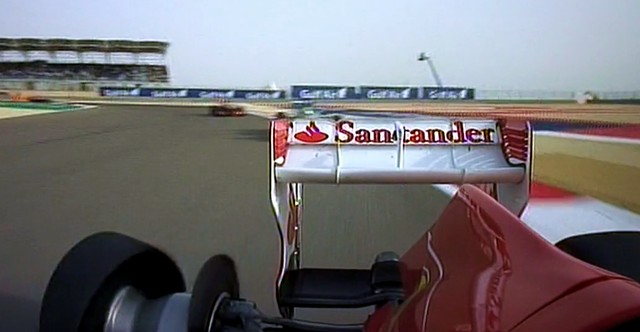 Look how close that hull came to coming off the rim altogether.  Great job, Pirelli!  Here's your Moooooooo-oooove!


"Just give up now, fools.  You know you can't beat me." - Hannibal Vettel

"Hot, flat and straight.  That's how we like our tracks." - Paul di Resta

"Congrats to Sergio.  He did a good job burning up my tires and pissing me off.  I almost spilled my tea." - Jenson Button

So there's your Top 10 for this, the most half-arsed F1Update! in F1U! history.  We'll see you in Barcelona in three weeks!

1 I can understand that Button made some weak sauce remarks on the radio, pleading with the team to restrain Perez, but it was in the heat of the race. But then he was rather whiny in some of his comments after the race as well. I expected more from him.

2 Eh, an arch comment or two was warranted. A little hard driving is okay, but you GOTTA keep your car outta your teammate's car! It's one thing if you can pass him clean, but don't screw the team by damaging both cars.

Lotta sloppy driving in this race...

And Force India higher in the constructor's championship than McLaren, even though Sutil got hit by Massa and knocked down the field early on. Man.