F1 Quals: Canada 2015 Having loaded myself up on buttermilk pancakes from Scandahoovia Inn (warning: swedish pancakes have been known to instantly clog arteries.  Fortunately, lingonberries have restorative properties equaled only by a high-level cleric's healing spells... and it goes with just about everything!) and conversation with the folks, I returned to Pond Central to watch myself some Qualifying for the 2015 Grand Prix of Canada.  So how'd it turn out?  Here's the provisional grid:


Sharp-eyed readers will note that Jenson Button's McLaren is conspicuous by his absence.  He had a major failure in part of his power unit during Practice 3 and the team couldn't get it repaired in time.  He'll be starting towards the back of the grid.  Seb Vettel, who had a power unit problem of his own, has been penalized five spots for passing under a red flag in P3, and thus will be starting halfway through the Hairpin.  Meanwhile, Embryo Verstappen received two penalties: five grid spots for causing the wreck towards the end of the race at Monaco, and a whopping ten spots for using his fifth engine of the year.  He'll be starting somewhere near Channel-Port aux Basques, where he's likely to have a slow getaway considering he'll need to take a ferry to the mainland when the lights go out.  Fortunately, the MV Leif Ericson (no relation to the Sauber driver) makes a good 18kts so it's only a seven hour trip to North Sydney, Nova Scotia.  From there, it's 14 hours by passenger car to Toronto.  He has his work cut out for him if he wants points.

Up at the top of the grid, nothing's changed.  Oh, there was some thought that Nico Rosberg might possibly take pole over Lewis Hamilton, but it didn't happen... even Rosberg said his last try was a "rubbish way to end the session."  With Vettel not making it out of Q1, Ferrari's Kimi Raikkonen felt free to stretch his legs, and it earned him his best starting position of the season.  He should try that more often.  The two Lotii of Lettuce Grosjean and Pastor Maldonado nearly came to grief in Q3 when both of them were released from their pit stalls simultaneously and wound up running side-by-side down the pit lane... I'm surprised there wasn't a penalty somewhere for unsafe release for that.

Otherwise, everything was pretty normal going.  The race is tomorrow on NBC... the big network, kids!  Break out those rabbit ears and pull the 12" b&w out of storage, it's race time!  We'll see ya afterwards for F1U! 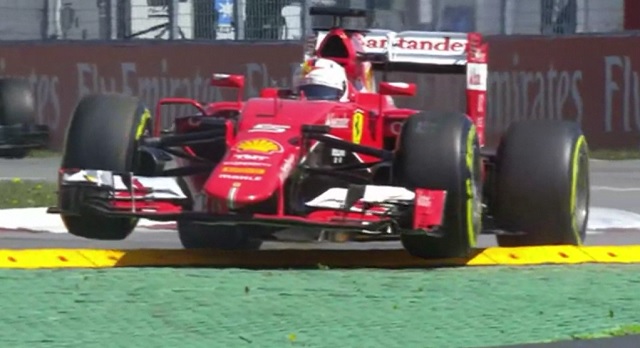