F1 Quals: Belgium 2015 Another day of blue skies and perfect weather at Spa-Francopants... something is obviously wrong with the environment if we can go two days without rain at this track.  But how did the good F1 folk do on the track?  Let's take a look at the provisional grid for the 2015 Grand Prix of Belgium:

Oh look, there's a Mercedes on pole... that's never happened before!  And Lewis Hamilton is driving?  I'm shocked I tell you, shocked.

Actually, the surprising thing is that Vettel is 9th after completely peeing a good final hot lap down his firesuit's leg at the final chicane.  The other Ferrari never made it out of Q2 after having existential car failure.  Everything else was basically as we've come to expect.

Except for one thing.  The two McLarens have accomplished something never before seen in F1... between them, they've racked up 105 places worth of grid penalties for this race!  Basically both cars have completely new power units in them, from transmission to ICE to batteries.  As McLaren/Honda has pretty much used their allotment of component changes for the season, they knew this was going to happen no matter what they did.  Then came the rule change at Hungary that said that if a car could not serve their grid penalties in one race, they just start last on the grid... previously they had to take time penalties as well.  As McLaren was probably going to be starting towards the back anyway, why not take what realistically amounts to a two-spot penalty and change their engine every race from here on out?  Give Honda more data to work with for the rest of this season-long test session?

I figure the other teams would have problems aplenty with that, but for now?  Go for 100-spot penalties each, boys!

The race is tomorrow morning; I'll do my best to get something up tomorrow night... I'm having brunch with out-of-town family.  See ya then! 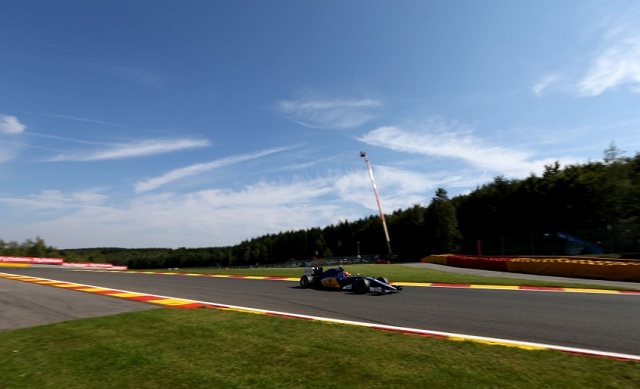 1 "Manor" is the new name for Marussia, right? Why the change?

2 Like all things in F1, the reason is "money".  Actually, for the whole of its existence, the team first known as Virgin F1, then as Marussia, now Manor, has been registered as "Manor Motorsports".  However, it raced under those other names due to sponsorship money.  In effect, the Virgin Group bought the naming rights, as did Marussia Motors.

Technically, the team is currently named Marussia Manor Racing; however, nobody but the Official F1 website calls them that.  There's probably some contractual reason for it.

Manor has been a racing team since 1990, starting in the British Formula Renault series.  It's progressed up the ranks much like a driver would.