F1 Practice: Singapore 2012 Y'know, I watched the live coverage of P2 around 10a, then went out to run errands, get some groceries, have lunch, then came home... and kinda forgot to do the writeup, took a nap, and here I am at 8pm.  Oh yeah, writeup!  Well here it is!  Better late than never, amirite?  To be honest, there's not a whole heckuvalot to write about, but let's get right to it!

Red Bull's Sebby Vettel led both P1 and P2, which A) shouldn't be a surprise because this is pretty much the perfect sort of track for the RB8; and 2) probably doesn't matter a whit.  It wasn't like the performance gap was huge; though it was .311 in P2 over Jenson Button, that was on one "qualifying style" lap.  When you look at the full-fuel-load laps, there's nothing between the Red Bulls, McLarens and Ferraris.  However, Vettel does have one advantage for this race that nobody else has:

That's right.  Sebby has a blinky-LED helmet.  I so badly want it to be hooked up to the KERS system, so that it only lights up when he presses the go-fast button.  Actually, it seems like they've kinda gone insane over at Red Bull.  After all, there's also this: 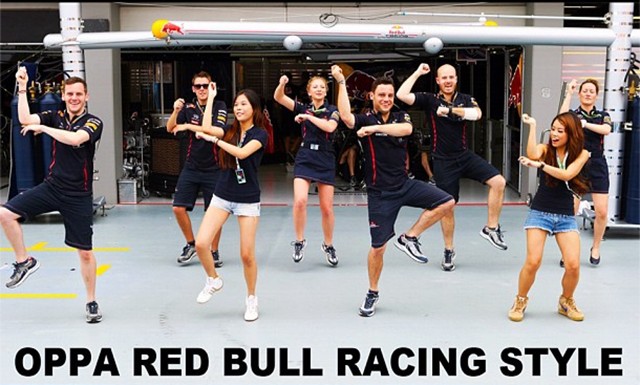 It goes without saying that Red Bull's pit stop times have gone up.

Really, the biggest news today is that 2013's provisional calendar has been released... and at least for 2013, Valencia is gone.  It's apparently going to be alternating with Barcalounger as the location of the GP of Spain, so we'll see it in two years... and with its disappearance, the "Grand Prix of Europe" designation goes away as well.

In its place?  TWO Grands Prix here in the USA.  The Grand Prix of America, aka Grand Prix of Weehawken and I don't care what it's officially called, will be June 16th... the weekend after Canada.  Meanwhile, the second running of the  United States Grand Prix will be November 17th, the penultimate race of the year.  Expect ridiculously heavy coverage of both here at The Pond.

Right, Quals in the morning and we'll see you then!

1 About every six weeks another story comes out in the Texas news that somebody else is suing over the Austin F1 track.  I hadn't checked recently, but I had kind of assumed that work must have been halted and would be way behind schedule, now.  To the contrary, the track was recently paved.