F1 Practice: Monaco 2012 Well, in the televised Practice 2, it rained.  It rained just enough to be too wet for slick tires, but not enough for the intermediate rain tires.  In racing parlance, the circuit was "greasy," except greasy at Monaco is a different cup of meat from anywhere else.  As the Legendary Announce Team pointed out, at its heart the Principality of Monaco is still a functional fishing village.  Okay, yes, it's the richest fishing village in the world, but the harbor isn't always filled with yachts.  And working harbors need trucks, and buses, and street cars, and Vespas, and they all drip and spit and hork oil and radiator fluid and transmission fluid and the stuff that goes in the windshield wiper tank, and all of this cocktail of maliciousness winds up being leeched out of the asphalt when it rains.  And F1 tires don't like it much. 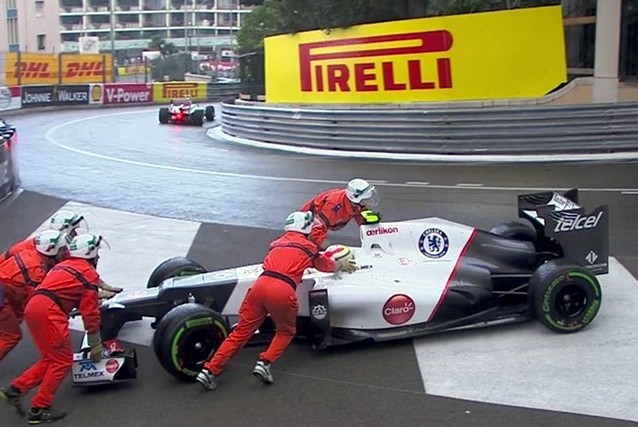 Which explains why seemingly half the field ended up sliding into the runoff area at Mirabeau in the course of ten minutes towards the end of the session.  The bad news is that it isn't supposed to rain on race day.  The good news is that Quals could be wet, and that's almost as good.  Could we see Heikki Kovaleinninninnie on pole? 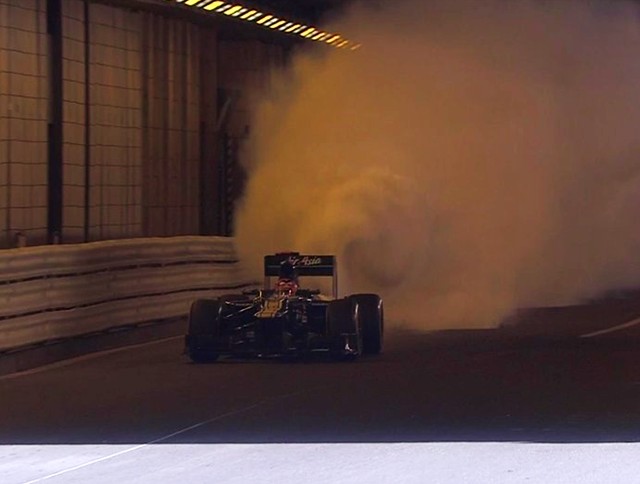 Only if he doesn't blow another engine.  He managed to bring P1 to an end nine minutes early when his lump went kablammo! and he killed every mosquito in the Tunnel.  Unfortunately, the smoke just sort of lingered in the enclosed space.  Combined with the oil he spilled, that was enough for the track marshals to throw the red flag and end the session early.

So to recap: the teams are going into a Quals session on the most difficult circuit on the calendar having gotten roughly nothing as far as data collection goes from the Practice session that's used for setting up the car, while knowing that there's probably going to be a 180° swing in weather conditions just to make things interesting.

I suspect that at times like these, the mantra up and down the pit lane is "if it was easy, everybody could do it."  Should make for fun watching, that's for sure... but we'll have to wait until Saturday.  See ya then!

1 That is an extremely impressive plume of smoke in the tunnel!

That is an extremely impressive plume of smoke in the tunnel!

F1 racers have smoke-screen emitters now?  How about oil-slick sprays and pneumatic jump pistons?  Maybe F1 racing is just a bit more like Speed Racer than I remembered...

3 I'm holding out for twin-linked autocannons. Weight penalty, sure, but they ought to make passing easier...

4 A game of Spy Hunter, anyone?

5 Avatar, rocket launchers would be better. There's no recoil.

6 Projectile speed's an issue, though. You ever try to shoot an F1 car?

Um, probably we'd better break it off before we get Pixy worried about the Austin trip.

7 Av, Steven, what you need is a disintegrator ray... otherwise you end up with lots of debris, which leads to red flags.  Since there's no passing under a red flag...