F1 Pr0n: McLaren MP4-26 It's always hard to tell what you're going to get from McLaren.  Without a doubt, the car is going to be good (well, usually), but they can be fairly... bland with their designs.  Now when you're one of the God-Teams of F1, you can do that.  After all, when your chassis is consistently one of the top three every year, you don't need to go into ridiculous mode on your designs.

But of all the teams out there, McLaren is the only one with an institutional sense of humor.  And McLaren occasionally does roll out the weirdness; witness the original "viking horns" on the MP4-21, for example.  So you never be sure what's coming from these guys... and without a doubt, the team went into full goofy mode this year. 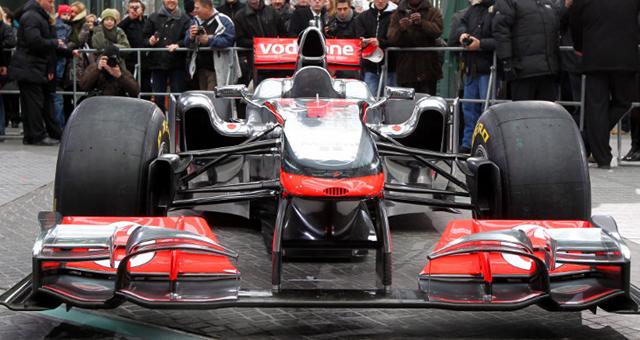 What in the name of St Fangio the Quick is going on with those sidepods?  Oddly, I believe the viking horns might just give us the answer.  Besides the obvious increased airflow into the radiators, I wonder if the odd shape of the 'pods don't give much the same effect as the viking horns, just in larger scale, with air being channeling over them and back towards the rear of the car.  Should be fascinating to see how that works out.

Seen from the side, the car looks almost normal.  Lower nose than on many of the others, with a very long, shallow descent all the way from the cockpit to the tip.  Still, the odd sidepods make the MP4-26 look like it has hunched shoulders.  I rather like the look of the car, honestly.  Very clean.  Swoopy, but not looking like it was drawn in the middle of a fever dream.

Even prettier from this angle.  The odd shape of the 'pod intakes are quite visible here.  I wonder... does that shape allow it to claim more of the air coming off the front tires?  It might be rather roiled up air, but it's still air to cool the engine. The front half of the car is just gorgeous... so clean, and such a change from the front of the Ferrari and Red Bull.  One thing that you might notice is the double air intake above the driver's head.  The one in the normal position is for the engine, as you might expect.  The one farther back along the fin is probably for cooling the KERS unit.

One last picture, the annual McLaren centerfold.  It's a big one, but there's no staples to get in the way.  Enjoy! 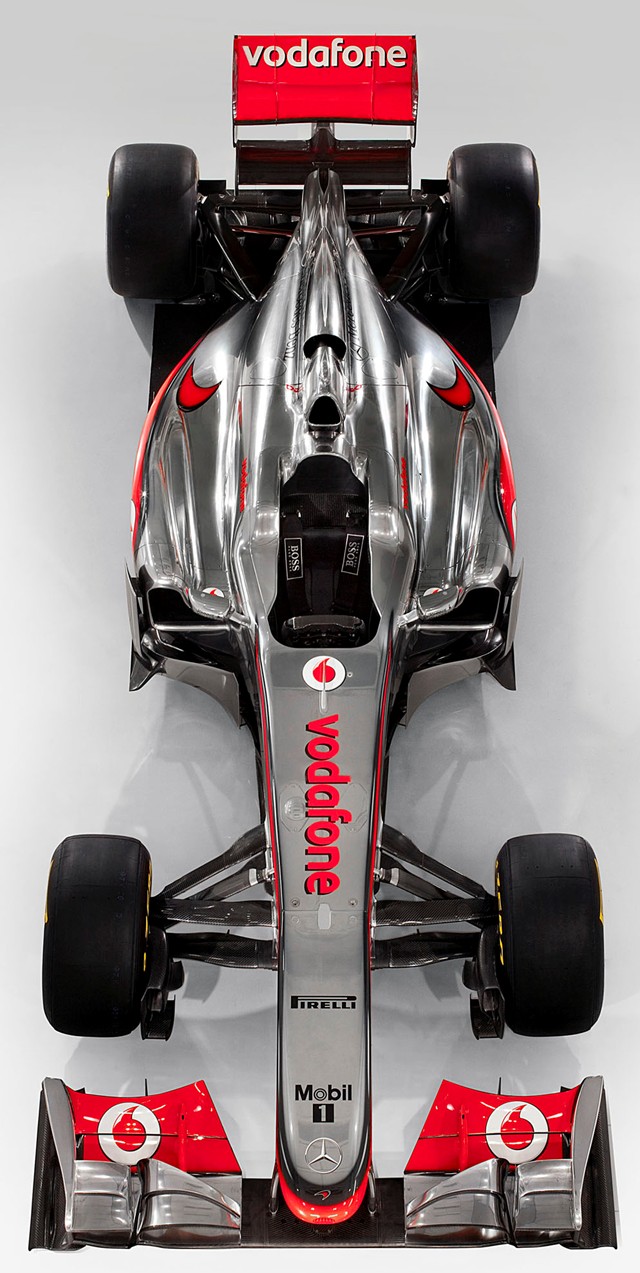 Baby.  The double air intake behind the cockpit is particularly visible in this picture, as is everything else on the car.  Lovely, just lovely.

1 The BBC says:
McLaren said the L-shaped sidepod front was an attempt to get more airflow to the rear wing, thereby increasing aerodynamic downforce.The second air intake is to aid cooling of the gearbox and hydraulics, according to director of engineering Tim Goss, at a time when McLaren have packaged the car as tightly as possible for optimum aerodynamic performance.

2 Well, score one for the Duck, then.