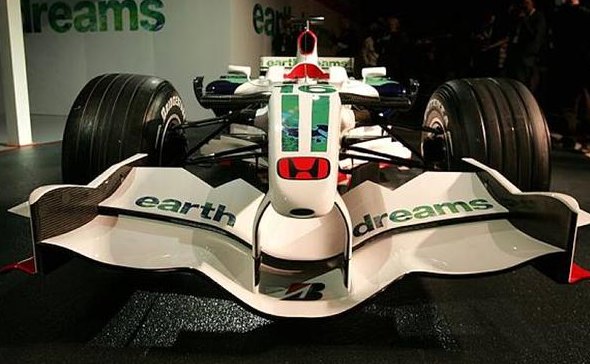 First the good news: that gawdawful "myearthdream" livery is (mostly) gone.  The bad news is that it appears that Honda doesn't go in for glamour photos. 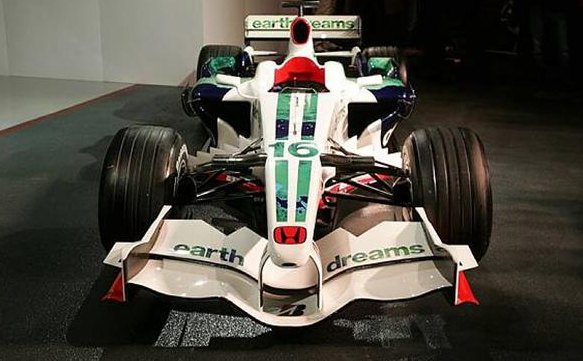 To be fair, what's left of the dumb "myearthdream" livery is handled pretty well.  Those green stripes remind me, in a way, of the famous British Racing Green.  No, it's not the same color, but you can see a tip of the cap that way.  But they've brought the classic white back, and that's really all that matters.

But what's up with the sawtooth pattern on the front wing and the bargeboards? 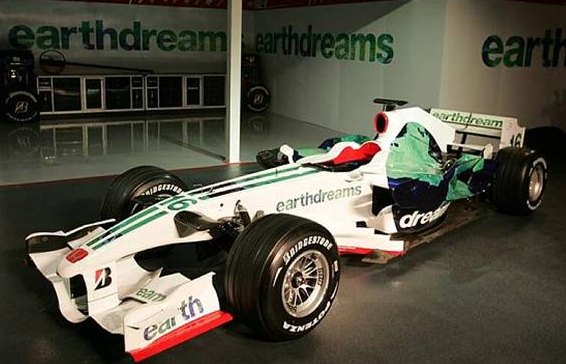 Nope, they had to leave the part of the myearthdream vinyls on the rear of the car.  I think I can say, without fear of contradiction, "meh."  The red highlights are a nice touch, though. 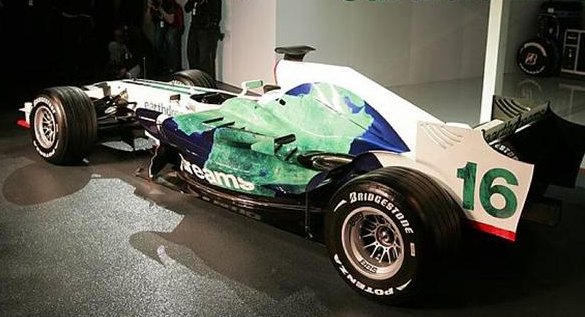 This is going to be really shallow of me, but having the car number on the tail like this is something I really dig.  Too bad the other teams don't do that.

Technically, the main body of the car is supposedly narrower than last year's car.  In an interview, Ross Brawn says that the RA107's main problem was that it was, essentially, TOO well-balanced... as if the entire car was balanced on the point of a pin.  Any minor shift in the weight (like, oh, accelerating, braking, or turning) was enough to throw the car out of whack, thus ruining the handling characteristics.  Yes, that would be bad.  So, the RA108 is less heavily engineered, I guess?  The team wants to earn points every race, they say, which isn't that high of a goal, but it's light-years ahead of 2007.  Considering that they looked like they'd be contending for a championship after 2006, though, it's a letdown.

1 Good question about the sawtooth edge. Every tip generates a little vortex in the same way an end of a deployed flap does in an airplane, which takes some energy off the main vortex at the ving tip. That may be the idea.

2 It's not bad looking, but it's no Force India.  And looking at a closeup of the Honda, the green blobs on the sides look like Mother Earth vomited on it.

Those older cars look more aerodynamic to me. The modern ones have all kinds of bars and fluff sticking out, which should cause turbulence vortices out the wazoo. The older ones were fully covered with a skin designed to create smooth air flow.

And I like the one that has four front wheels.

Presumably all that cool stuff was made illegal by the governors, right? (I know they're no longer permitted to have skirts that brush the pavement.)

4 Steven, I'm not disagreeing.  I prefer the older cars as well, as do my stepfather (Ph.Duck) and Vaucaunson's Duck (occasional commenter and friend since grade school).

The newer cars, though, do everything the old cars could do, but they do it better aerodynamically.  Yeah, they've got those odd fiddlybits that make the chassis look like a model car put together at random, but...

The six-wheeled Tyrell was a clever idea: a way to increase the tire grip without increasing the drag.  So, they shrank the front tire to 10", so as to fit behind a faired front wing.  Of course, that reduced the grip, so they jammed a second set of tires behind the first.  It actually won the Swedish GP in 1976 (in fact, they came 1-2).

The FIA then changed the rules to define a car as having four wheels.

The FIA is famous for killing clever ideas (like ground effect skirts, or the fan-car), but F1 engineers have always figured out a way around the rules.

It's a shame they're such fuddy-duddies. The sport would be a lot more fun if the engineers were given more leeway to experiment.

If someone comes up with a radical innovation (e.g. 6 wheels) that works really well, why not let them use it? Next season a lot of other people will adopt the same thing, so it's only a temporary advantage at best. Sigh.

(Seems to me we had this discussion once already.)

6 Thinking about it, I bet I know what the F1 rules committee is thinking: "Is this a race between engineers, or a race between drivers? If we allow too much experimentation, the engineers will dominate the sport, and drivers won't matter very much."

If I had to hazard a guess why they've introduced extra vortex-inducing sawcuts into the front aero package, I'd say they're distributing the energy loss across the front end while putting the turbulence of those vortices to use.

Turbulent air is terrible for friction drag, but great for form drag. The free-stream flowing over blunt bodies (and for all their sweeping lines, F1 cars are still quite blunt) in turbulent air separates far later than a smooth free-stream. If you can shift a bit of the turbulence produced by the front wing out in front of the suspension, you may see a significant reduction in the stagnant/turbulent (form-drag producing) region behind each suspension member. Or those vortices may be meant to interact with some other part of the car farther back. The longer you can get the free-stream to hug the body of the car, the less form drag you have to deal with.