F1 on TV: Singapore 2014 It held such promise.  The first ever F1 night race running through the city streets of Singapore?  There's no way that combination could go wrong.  Except that it did.  Here's the track map for the 2014 Grand Prix of Singapore: 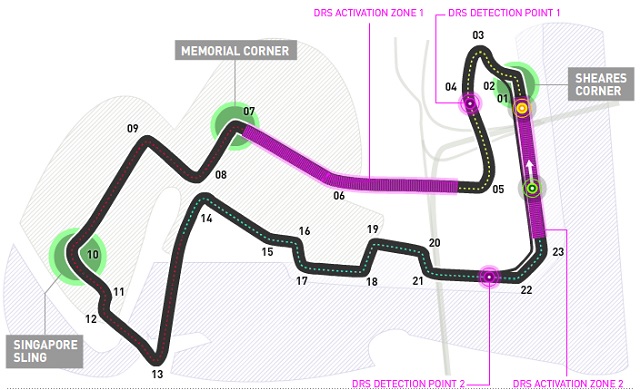 To be blunt, this is a brutal circuit.  The nigh-on constant right-angle turns are a unfortunate byproduct of modern city streets... you just don't see that many curves in a city.  As a result, however, the Marina Bay Street Circuit is something of a stop-and-go affair with corners that are hard to pass on.  While it's true that the worst turn on the circuit (and perhaps all of F1), the Singapore Sling, was reprofiled to prevent the constant Kerbal Space Program-like launches off the curbs, the rest of the track is terribly bumpy.  Throw in walls that appear to be made of a F1-Car-Attractant material, high heat and humidity levels that make it seem more like you're breathing water than air, and all-in-all you've got a circuit that nobody likes much.

Still, the cars look absolutely bitchin' under the lights.

Our friends in the Legendary Announce Team will be providing their usual level of coverage... here's the schedule:
FRIDAY
Practice 2: 830a - 10a live on NBCSN
SATURDAY
Quals: 8a - 930a live on CNBC
SUNDAY
2014 Grand Prix of Singapore: 630a - 9a live on NBCSN

Of course, the F1Update! team will be here, doing whatever it is they do.  See you then! 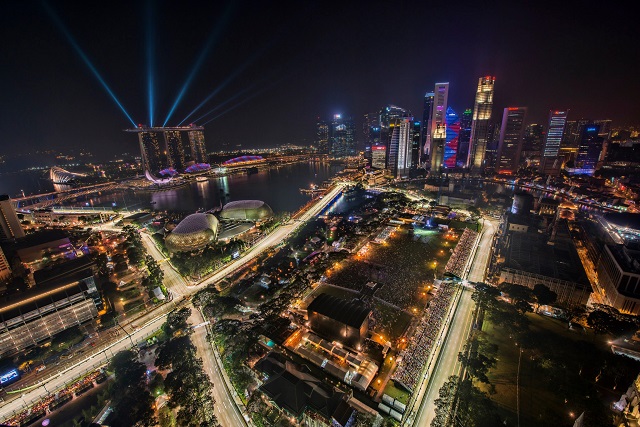 1 And just think, next time is Suzuka the wonderful, the great, the awesome. (It's too bad they can't hold the Japan F1 on Suzuka every year, instead of alternating with Fuji the crap.)