F1 On Speed!: Malaysia 2009! Hot on the heels of the entertaining Australian Grand Prix at God's Slot Car Track, we find ourselves at the first of the Hermann Tilke "Adventure" circuits ("You are in a maze of twisty little passages, all alike"), the Sepang International Speedway, Kuala Lumpur.

Let's take a look at the track map: 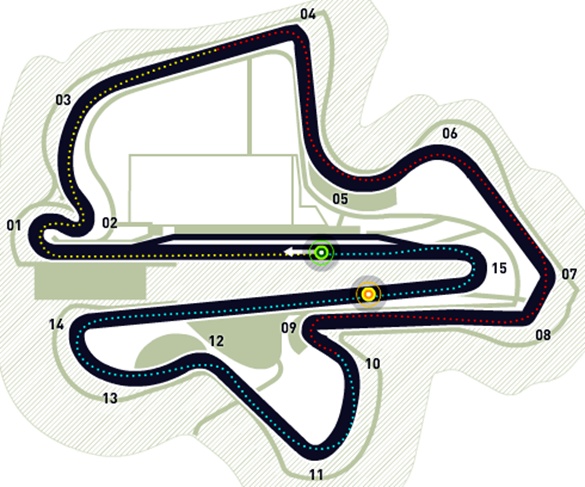 Unlike Australia, Sepang actually has some long straightaways.  These would call for a low downforce setup, but doing so will ruin you on the turny bits.  Generally, you go for a comprimise solution and hope the car won't do you in.

This year, however, it's anybodys guess what the correct setup will be.  New aero rules and the slick tires means that nobody has the faintest idea what to do.  The three practice sessions'll be key, for sure.

Except for one thing: Sepang is legendary and/or notorious for the ever-changing weather.  It's not unheard of for the race to begin in the high 90s F. with bright sunshine and stifiling humidity... until the torrential downpours come halfway through the race.  If that happens, you really can throw every team's plans into a cocked hat.

Oh, and by the way?  The forecast calls for a wet race.  New slippery cars and rain?  This has the potential of being a Force India win: they're not fast enough to have problems in the wet!

On the whole, however, I'd rather be at Spa-Francopants than Sepang.  Like most Tilke tracks (Turkey excepted), it's rather dull, with little jinks thrown in at just the right place to screw up a passing attempt (turn 12, I'm looking at you).  To the circuit's credit, I DO rather like turn 2: it's like a miniature version of The Corkscrew at Laguna Seca (and yes, that IS a F1 car in that link): decending and off-camber at the same time.  That's about the only thing I like about Sepang, though.

STILL!  It's F1, and the good burghers at SPEEDchannel will be bringing us live coverage all weekend, starting with Friday's second practice from 1am to 240am central time.

Unfortunately, that's the last time that coverage will be at a human hour.  Quals comes to us plausibly live on Saturday from 4am to 530am... will we see another Brawn front row lockout, or will a Red Bull or Toyota sneak in?  Please note that the Quals writeup will probably be very late on Saturday, due to a prior engagement that is, to put it mildly, unbreakable.

The live race coverage will be starting even earlier on Sunday, with SPEED going live from 330am to 6am.  A replay will be shown from 1230pm to 3pm for all those people who aren't nocturnal.  Will it be Rubens Barrichello's time to shine?  Vettel?  Trulli?  Glockenspiel?  Or even something really unexpected, like a McLaren or Ferrari?  Sunday will tell the tale!

1 Considering what Hamilton did in Australia, I wouldn't count him out.

It looks like a really safe track. Nice big sand traps outside all the big corners except turn 2, and that's not a fast one, and there's grass outside it.

Is the thing that looks like a big nutcracker the grandstands? I think I'd rather watch from the building that says "Sepang Circuit" on top of it.

3 The nutcracker is indeed grandstands.  The track was purpose-built to bring in F1, so it was made to F1 safety standards... unlike, say, Australia which had to be modified.

And just forget about Monaco fitting the rules.

I've just posted an article that I wouldn't mind your thoughts on. It took ages to get the info together and talk to the right people. It's about Top Gear and the Nurburgring

That is one interesting course.  Can't wait for the race.