F1 on SPEED!: Brazil 2010 From the new track at Korea, we find ourselves hurled over 11000 miles to Saõ Paulo, Brazil, home of the Brazilian Grand Prix... and let's get it out of the way now: that's a lot of Grand Prix.

Let's get something else out of the way: I do not like this track.  Let's look at the map... 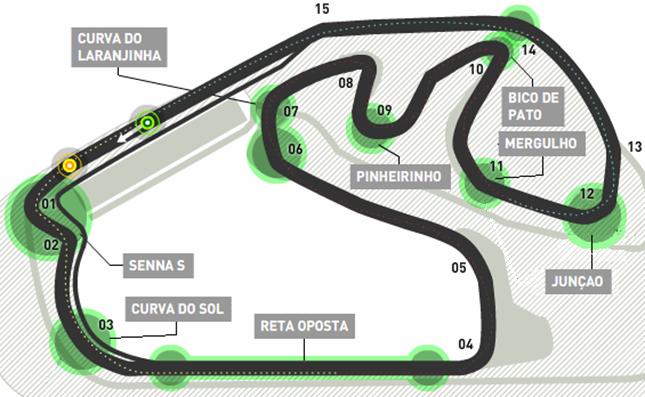 I admit that my dislike of the Autodromo Jose Carlos Pace rather sets me apart from many fans and most of the drivers, but I have never been fond of the site of the Grand Prix of Brazil.  Indeed, now that the French Grand Prix has gone by the wayside (and good riddance to bad rubbish), only the nightmare of boredom that is Hungary is higher on my antipathy list.

Which is strange, because the Brazilian Grand Prix has coughed up some stunning races in recent years.  Consider 2007, when Lewis Hamilton lost the Driver's Championship to Kimi Raikkonen by throwing his car off-track trying to make a pass he didn't need.  Or perhaps 2008, when Hamilton redeemed himself on the last turn of the last lap, passing Timo Glockenspiel's Toyota to win the Driver's Championship by one point over hometown favorite Felipe Massa, who had won the race.  Or even 2009, which had the longest quals session in F1 history due to torrential rains (and coincidentally saw the arrival of Racey the Owl) and the dual championships for rookie team BrawnGP and Jenson Button, with Massa, recovering from his horrible accident, waving the checkered flag.

Despite all this, I despise this circuit.  More commonly known by the name Interlagos, meaning "Between The Lakes" in Portugese, the course is built, well, between two man-made lakes that provide water to the sprawling metropolis that is Saõ Paulo.  These lakes have caused the circuit to wrinkle over the years, to the point where even after a resurfacing in 2007, it was easily the bumpiest track in F1.  I don't like that.  The pit-in is positioned so that the racing line through Turn 15 goes through it, and it always looks like cars are going to smash head-on into the pit wall at 160mph.  I don't like that.  I don't like the pit lane itself, the longest in F1.  But most of all, I don't like the whole atmosphere of Interlagos.  Even on the sunniest days it feels dull and gray.  Watching the race often feels like a chore because of this.  The whole layout seems uninspired to my eyes as well.

As mentioned before though, most of the drivers love Interlagos.  The elevation change (down, from Turn 2 to the exit of Turn 3, then up, from around Turn 13 to the slightly banked Turn 15) gives them a sense of going somewhere, the fast parts are fast without being dangerously so, and the twisty bits are challenging without being ridiculous.  So they say.  I just hate it all.  It's a visceral, emotional hate, with no logic behind it.  I admit it, and can't help it.

That all being said, it's looking like Brazil is going to serve up another whopper of a race this Sunday.  HWMNBN could in theory wrap up the Driver's Championship.  Red Bull could lock down the Constructor's Championship.  Or everything could go the way of Korea and we'll have a scenario where we'll have four or five drivers all within range of the Championship going into Abu Dhabi.  No matter how you look at it, or how much you like (or dislike) the track, the GP of Brazil will almost certainly be the most important race of the year.

And SPEED will be there!  Live coverage of Friday's Second Practice goes from 11am to 1240pm.  Quals, on the other hand, are Saturday from 11am to 1230pm.

The Grand Prix of Brazil will come to us LIVE on Sunday, with coverage beginning at 830am, and the checkered flag dropping somewhere around 11am.  As usual, all times are Pond Central, and don't forget that you need to set your clocks back an hour when (if?) you go to bed on Saturday night as the US reverts to Standard Time.

Also as usual, the F1U! crew will be all over the race like an odd-toed ungulate on a blade of grass.  See you then!

*Wiping away a tear for the dwindling F1 season*

And awesome that qualifying, practice and the race will air at times of the day which will not  require a lot of No-Doze.