F1 on SPEED!: Abu Dhabi 2010 And so it comes to this, the final race of the season.  In many ways, this is the way it should be.  While we're unlikely to have the championship come down to the final turn of the final lap like it did in 2008, one race for all the marbles just feels right.

And the Yas Marina Circuit in Abu Dhabi will be the venue.  Let's take a look at the track map: 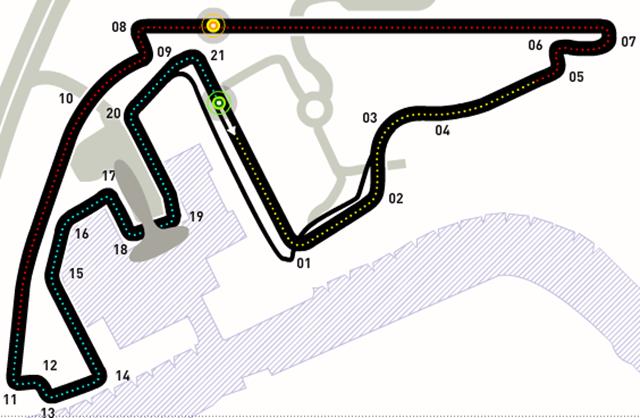 Dominated by two long straights and a third of not-insignificant length, you'd think the McLarens with their high top-end speed would own this place, and it may in fact work out that way, but I'd not bet on it.  Most of the turns are low-gear, low-speed, which would play into the Red Bulls' hands, but I'd not bet on that, either.  No, the easy way to wager would be on the Ferrari, just because of its balance between handling and grunt.  Since that's the easy way, however, I'm not going to take it: HRT will own the victory after a hideous blimp accident clears the way for them.

Bridgestone is bringing their super-soft and medium compounds, just like last year.  Drivers say it combines the best of modern circuits with the best of Monaco-style street circuits, which sounds like Korea's mission statement actually.  If we have a race like Korea this weekend, I'll be happy... not expecting it, though.  The main excitement last year was provided by rookie Kamui Kobayashi passing Driver's World Champion Jenson Button into Turn 8, then the processional began and the race turned dull.  The most interesting part of the circuit is the pitlane, which goes through a tunnel under Turn 1 as it rejoins the track.  It didn't cause any problems last year, but more than a couple of cars got squirrely there.  One bump into the wall and we've got major headaches.

Well, we'll be seeing it all unveil live on SPEED!, beginning with Friday's 2nd Practice from 6am to 740am.  Quals is Saturday from 6am to 730am.  Then, finally, we see the second-ever Grand Prix of Abu Dhabi on Sunday, from 530am to 8am.  There'll be a replay from 230pm to 5pm that afternoon.  And then we're done for the year... and I have to admit to some relief.

In a completely unrelated topic, I'm going to toot my own horn here for a second.  During last year's F1U! for the GP of Abu Dhabi, I said this:

Perhaps not a prediction that went particularly far out on a limb, but there you go.

1 Is this a street circuit?

2 No, it's not.  But much like the Korea International Circuit, Hermie Tilke tried to work elements of a street circuit into it.  Turns 11 through 21 would fit very nicely into Singapore as they go past the Marina and under the hotel (the dark gray hand razor-shaped thing between 18 and 19) for example.

But it's a purpose-built track.

3 Your horn was brilliantly tooted.  :-)

4 Thanks for the very best insight on f1. 2 questions out of curiosity 1. hwmnbn may have the best shot at the title. Whats the story on why he mnbn? 2. without telling too much, where does your experience, access to info come from? How often you travel to the races? To all: Enjoy the Yas weekend!

5 Dog, HWMNBN earned his name for his propensity to burn teams down around his ego.  He attempted to blackmail McLaren in the 2007 season, which led to the team being fined $100million.  Then there was the whole Renault thing in 2008.  He's a fantastic driver, but he's a lousy human being.

My experience is all television-based; I've never been to a race.  I've got five or six websites that I frequent for information but most of the analysis is my own, working from the data they provide.  I've been watching F1 for maybe seven seasons now, though I remember watching races as a young'un.

So you too could be a F1 geeeeenius!  Just get obsessed, like I did.