F1 on NBCSN: Korea 2013 It's hard to believe that this will be the fourth race at Korea.  It feels like just... um... four years ago... since that first deluge-filled race.  Arguably, that first race, which ended with Hannibal Vettel blowing his engine as night fell around the circuit, was the only one worth watching.  Now they're talking about ending the Korean experiment.  Let's take a look at the track map for this maybe soon-to-be-gone racetrack: 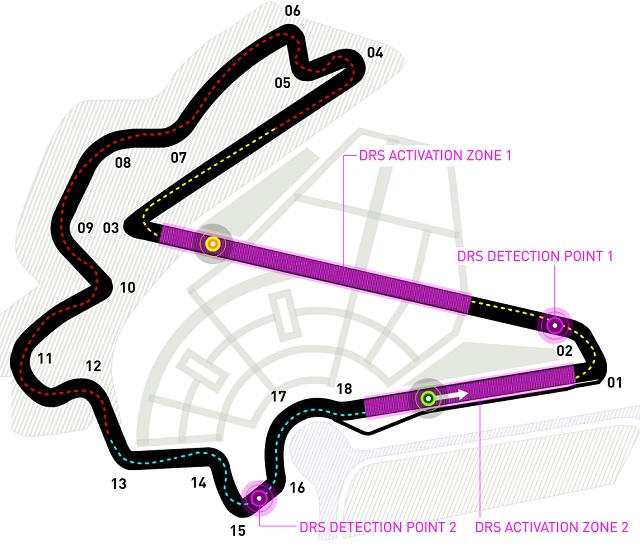 The sad thing is that there's no reason for this track to be a lousy runner.  The designer just got a little carried away with all the fiddlybits on the back half.  Instead, what we've got is half a circuit where you can't pass because you're too busy making turns, and another half where you can't pass because you're all right around the same speed anyway.  This is not conductive to good racing.

Unless it rains, of course, in which case everybody is open to anything that happens.  Oh by the way, there are storms predicted for race day... just sayin'.  Oh, and that yellow dot up there?  That's not only the location of the speedtrap, but it's also the approximate location of The Elephant.

Now they're talking about ending the Korean experiment.

Say what? Tell us more.

2 Sorry it took me so long to answer, Steven.  The short version is that the Korean promoters have taken a multi-gazillion won bath on the whole thing.  None of the development that was supposed to occur, like the mini-city inside the circuit,  has come to pass.  Attendance started poorly and has gone downhill from there... it's quite a distance from Seoul, and not an easy drive.  Hell, food that was left in refrigerators after the first race was STILL THERE when the teams returned for the second.

But, hey, PSY performed last year, so there's that.