F1 on NBCSN: India 2013 Namaste!  The next stop for the F1 Circus is the Buddh International Circuit in Upper Noida, Uttar Pradesh, India.  It's the third time Formula 1 has made the journey to the subcontinent, and it might just be the last.  With that in mind, let's take a look at the track map, shall we? 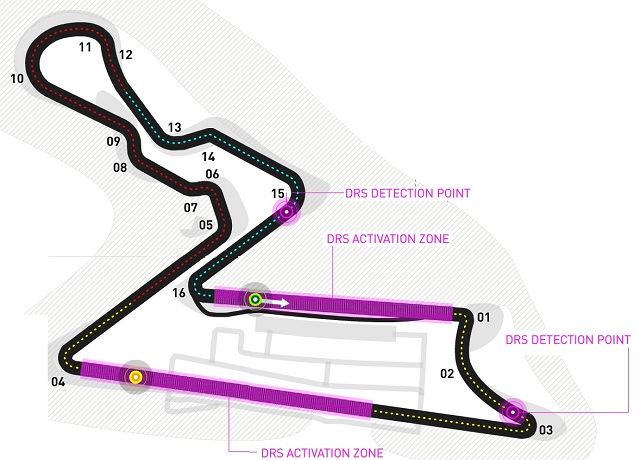 Sadly, India is off the calendar for 2014 due to political and scheduling issues.  It's supposed to come back in 2015, but nobody knows that for sure quite yet.  So if this is the last time we experience this course, it may be a memorable one: this could be a championship clinching race for Hannibal Vettel.  Should I mention that Vettel is also the only driver to have won in India?  I think I'll just quietly draw a veil over that sad fact and move on.

It's a fast circuit without much of the mickey-mousing that Hermann Tilke is justifiably reviled for.  Having said that, it's also not a technically difficult track to drive.  For example, Singapore is a technical challenge for a driver... there's no room for mistakes and a ton of places to make them.  India?  Not so much.  The layout is wide with plenty of runoff area, so if you do make a mistake, you wind up being able to just keep on driving, no huhu.  One thing that's quite pleasant about Buddh is that there's a decent amount of altitude change: almost 45 feet in the first three turns alone.  The track's big party piece is The Carousel, Turns 10-11-12.  Over 180° of awesome banked multi-line turn... yep, in theory two cars could run through it side-by-side at speed and neither would have to yield to avoid an accident.  In practice, not so much, but it COULD happen.

Well, the Legendary Announce Team will be bringing us their usual coverage this weekend... let's see what the schedule looks like!
FRIDAY
330a - 5a: Practice 2 live
SATURDAY
330a - 5a: Quals live
SUNDAY
4a - 630a: 2013 Grand Prix of India live

You'll note the half-hour starts up there... that's the fault of India's oddball timezones.  Just tell your DVR to look around, it'll find 'em on NBCSN.

Bring your Kingfishers, we could see a Champion crowned again...

2 Don't get me wrong, we're not talking NASCAR banking here or anything, but it's not flat.

3 What does Vettel need to do to win the championship? 4th or better, something like that? How many points does he need to put himself out of reach?

4 Vettel currently holds a 90 point lead going into India.  If at the end of the day he has a 76 point lead or better (three races left, max 25 points per), he is the champion.

That means that, even if Vettel doesn't finish the race, HWMNBN must finish on the podium to continue to have a shot.  Here's the points outlay per position:

So, if HWMNBN wins (25 points), if Vettel finishes 4th, Vettel wins the championship.

5 Actually even if Vettel finishes 5th, the best Alonso can hope for is to end up tied with Vettel on points, and the WDC would still go to Vettel in that case, as he has more race wins over the season (9 so far), even if Alonso wins the remaining 4 (giving him 6 wins).
For the same reason, just being on the podium at India isn't good enough, a 3rd place there followed by 3 wins only nets him 90 points and a points tie that he then loses.  He needs to finish 2nd or better in India or Vettel is the WDC.

Whether he wins it in India or not, HWMNBN would need a miracle to win it overall. He'd need Vettel to not score 12 points in aggregate in 4 races, which considering how things have been going is... inconceivable. If I were a betting man, I'd want 100:1 odds on such a bet, at least.

It would be interesting to see the Vegas line on this.

9 Not for HWMNBN... I think the odds of him winning the Championship are a helluva lot longer than 150:1.