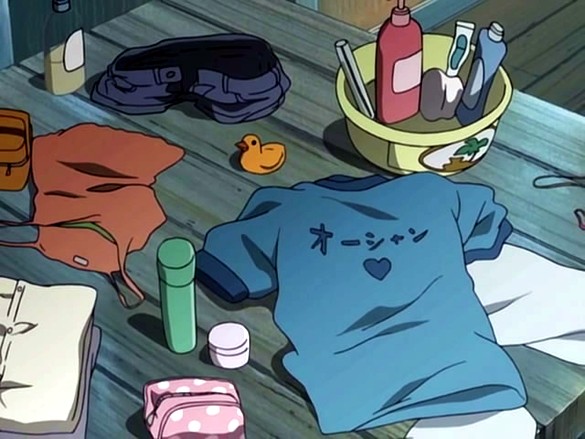 I'm of two minds of this show.  One part of me likes it quite a bit... it's fluffy entertainment that requires no effort whatsoever from the watcher.  The other part, however, is just annoyed by it all.  In a way, it reminds me of the other show Kyoto Animation made in this style, Lucky Star.  The problem is that after the first three episodes, LS took off like a SR-71 kicking in the afterburners and became something special.  K-On! is showing no signs of doing so after four.

Sure, if you like slice-of-life shows, it's worth watching, but it just feels like there could be so much more here.  I'll keep up with it, but I'm not holding my breath waiting for "magic time".

1 Well in ep. 4 the first clue shows up that they have more talent on board than they thought.

2 Yes, I saw Mio in her bikini too, Toadold.  Oh, wait, that's not the "talent" you were talking about.

Yes, it appears that they've got a savant on their hands... which was telegraphed so clearly in ep03, it may as well been in clear English with the header "AF needs water".

But that's not my point.  Maybe the first time they play together, the show will zoom into the stratosphere, but for a show about a music club, there's been practically no music played.  *shrug*  I'm just saying that it's falling flat for me, and it shouldn't be...  for all intents and purposes, I'm the bleedin' target audience for this show, for heaven's sake.

3 Yeah it definitely needs more music (if only a scene where Yui gets given a pile of CD's a la School of Rock), but so far am sold on this show- if only for Mio (Kagami mk2- not so grumpy and a hell of a lot bouncier!)

4 Well what are the odds that an Anime show is going to have really great rock music? I have been surprised by the quality of music in some of the shows since I've gone anime geek a couple of years ago, but if K-on comes up with just a couple of good or even adequate numbers I'll be happy. I kind of wish I new more about the rock music scene in Japan.