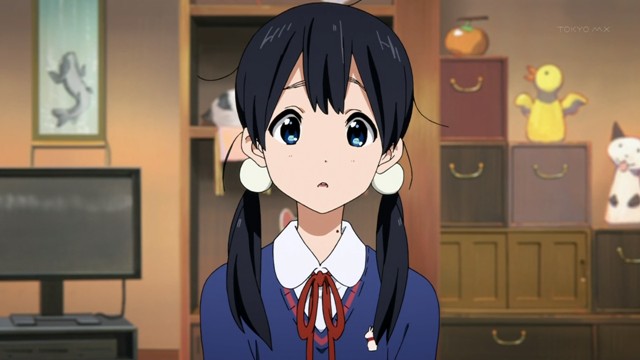 Well, the first episode of the new KyoAni show debuted today.  Unlike almost everything else they've done, Tamako Market is original to Kyoto Animation, not based on a manga, light novel or video game.  This... may not be a good thing, as KyoAni's previous foray into original work, Munto... let's just say it wasn't worthwhile and leave it at that.

As far as THIS original work goes, jury is still out.  It had some good points (it looks great, as all KyoAni shows do, and Anko is also great) and bad (wtf bird?), but it's anybody's guess as to which will win out.

Still, they put a duck in it.  That counts for a lot.

1 The Munto OAV wasn't terrible, just a bit nonsensical. The remake TV series, though... they clearly wanted to expand on the story & setting and had no idea whatsoever how to do so. The only good thing about the TV series was that it was slightly prettier (oddly enough) since they had better-honed skills and better technology than they had back in the OAV days.

So, yeah, unless they've hired an actual writer, they may have problems here. Adaptations are their strong suit...