As If We Needed Another Reason To Hate HWMNBN, And Felipe Massa News It's finally official: HWMNBN will be driving for Ferrari in the 2010 season.  He'll be joined by Felipe Massa, and Giancarlo Fisichella will be the team's third driver.

Which means that Kimi Raikkonnen is out at Ferrari.

Of this, we shall speak no more, unless it is to heap derogatory comments upon it.

Speaking of Felipe Massa, however, he got back behind the wheel for the first time since his horrible accident in Hungary.  Sure, it was in a Kart, but it's still the first step in getting back to F1 trim.  He turned more than 60 laps on the kart track at his home circuit of Interlagos on Tuesday. 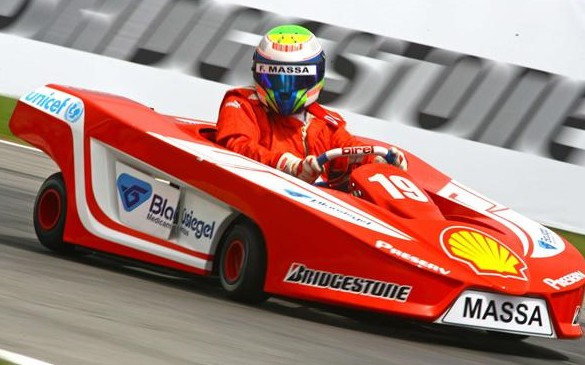 He did manage to beat Baby Yoshi and Diddy Kong, but lost to Mario.

I wonder if Kimi will be able to find another ride? With several new teams joining next year, they're gonna be hungry for experienced talent. And though Kimi hasn't been a champion, he's done well overall. He is far from the worst driver available, and definitely not the worst one who is at liberty.

I won't be at all surprised if he has a new home for next season. But it won't be in as good of a car as Ferrari would have provided him.

It would be ironic if it was Renault, wouldn't it? With both of their experienced drivers now gone, they're going to be looking hard.

3 Kimi was looking at WRC, but he's probably not ready for the next season. He might try to jump in early with a weak team, I suppose.

4 Someone's already updated the Wikipedia entry for HWMNBN. It says that Kimi is rumored to be going to McLaren. Which would mean that Heikki is out there, because there's no damned chance that McLaren is dumping Hamilton.

5 Smart money says Kimi'll go to McLaren.  I can't imagine him going to one of the new teams and getting stuck in a lousy car.  Renault, maybe, but if it's not McLaren, I'd be surprised.

Heikki's gone, no question about it, whether or not Kimi comes in.

Last weekend the Legendary Announce Team mentioned that Kimi still has $40 million left on his contract.  Hope he got a good buy-out.

and many of it's drivers have been some of my favorites. I'm not sure how I feel about this new revelation, because I've never been an Alonso fan... I don't like his attitude. So if he's good for the team, I guess it's a good thing, but I'll be rooting for Massa!