A Celebratory Double Ducks In Anime I can't believe it, but it's true!  The Ducks In Anime show of shows, Hidamari Sketch, has been licensed by Sentai Filmworks/Section 23 and will be available here January 10th, 2010.  Many times I've said that there was no chance in the world that the series would get picked up, what with the state of the industry being what it is and all.  I'm deliriously happy to be wrong, though.

In celebration, it's time for a double-shot of Ducks In Anime! 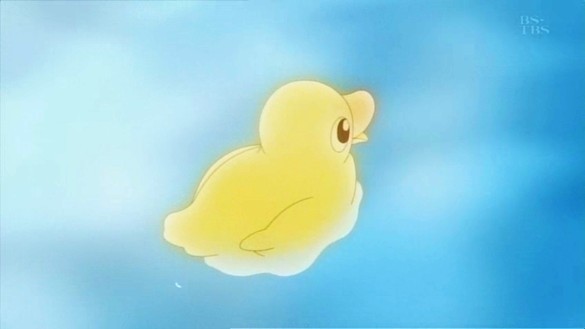 We had what was, in HidaSketch terms, an action sequence for the duckie when it actually turned a full 360 in response to Yuno's moving her arms in the tub... and had the screen entirely to itself in the process!  I swear, SHAFT must be catering to the duck lovers of the world.

The next pic is behind the NSFW tag, not because it is, but because some workplace somewhere would probably look askance at it: 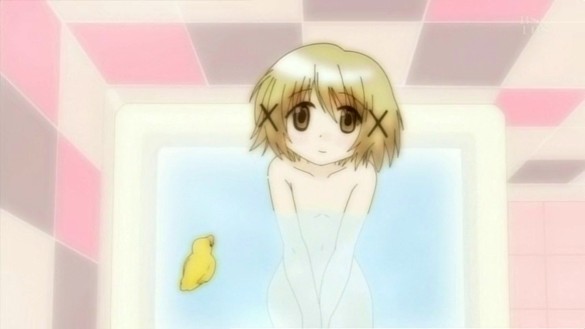 I don't think I've been this happy to hear about a license being picked up since Funimation took over Kanon 2006 from the corpse of ADV, when the latter went down before releasing the final DVD of the series!

It only makes sense that Sentai would grab HidaSketch, though... in my mind, it's absolutely an ADV kind-of show.

1 Hello Wonderduck, why don't you have a seat over there?

2 Ladies and gentlemen, let's give a warm round of applause for Brickmuppet.

3 What surprised me is that it's obviously an A-list license. I didn't think Ledford had that kind of money to invest, or that kind of credibility with the Japanese studios, where someone with an A-list property would be willing to trust him with it.

4 If I had to guess, I'd say it occurred because it's a short series (12+2 specials) that, perhaps, SHAFT doesn't think is an A-Lister.  While I personally adore the show, I think such titles as Bamboo Blade, Chrome Shelled Regios, or Bakemonogatari are much more likely to be hits... which is why I didn't think HidaSketch would get licensed in the first place.

5 Hidamari is absolutely, positively not an A-list license.

It's the kind of title which will be extremely difficult to get retailers to stock. "Cute but otherwise unremarkable high school girls have heartwarming, funny adventures at school and dorm" is not a recipe for tremendous sales. Yeah, sure, Azumanga did well, but a lot of other titles haven't since then, and they'll be fresh on the buyers' minds.

I'd guess that precisely the opposite logic governed the ADV-zombie's decision. Here we have a title that none of the other companies want to touch with a fifteen-foot pole with cross-braces; ADV had notable success with Azu, and frankly at least some of the people remaining are the kind of people who'd appreciate Hidamari. On top of that, ADV's like a shark; because they own their own production facilities (through whatever weird legal contortion), they have to keep them busy, or pay people for nothing; if they stop swimming, they'll drown.

6 What is in that "lot of other titles"? Sketchbook, Manabi are not licensed. Pani Poni Dash is, but it was crap. Lucky Star did poorly? News to me, I have it bought scattershot, retail in Best Buy. Anything else? The Endless School Rumble perhaps?

7 Lucky Star was marketed by and had the full faith and credit of Bandai behind it. It is also a slightly different sort of humor. Azumanga and LS were very atypical hits. This is not the sort of thing thats flying off the shelves in general. It is not something that a lot of companies would take a chance on right now given the economy. That makers it different enough (and cheap enough)that Zombie ADV is pouncing on it. It doesn't hurt that it is similar to something they've had success with before.

I'd say its a good move.

re "Zombie ADV" I'm tempted to make a joke about "brainz, brainz" but I'll skip it.

9 I don't know that Lucky Star was a "hit", either. At best, Bandai traded pretty heavily on the Haruhi sales model and sales were mediocre. (Not surprising - LS is a show without a lot of plot, so there's no big penalty for stepping off the ride at any given point. It's not clear that it's going anywhere in particular until the last episode...)

If anything, it's serving as a cautionary - "we just had another one of these shows that was pitched as a big hit, but now our shelves are full of these darned expensive limited-edition boxes nobody wants."

Yeah, School Rumble is one of the shows I'm thinking of. Also, there's a number of shoujo series. Remember, we're talking retail buyers, not topic experts! None of us needs an explanation of why Hidamari isn't shoujo, but even if you told the guy at Best Buy, is he really going to go for it?

10 Good point that LS may not have been a commercial hit in the eyes of retailers.
I do note that the Lucky Star OAV was not dubbed.
Those huge collectors box sets did strike me as a bizarre marketing decision.

11 I went scattershot without a box. I'm not a collector.

12 I hope Madman pick it up in Australia, because it's one I'd definitely buy.  Possibly the most enjoyable show I've watched this year.